A stunning piece of waterside architecture inspired by cliffs and geographical uniqueness...

What about one of these for Port Royal... 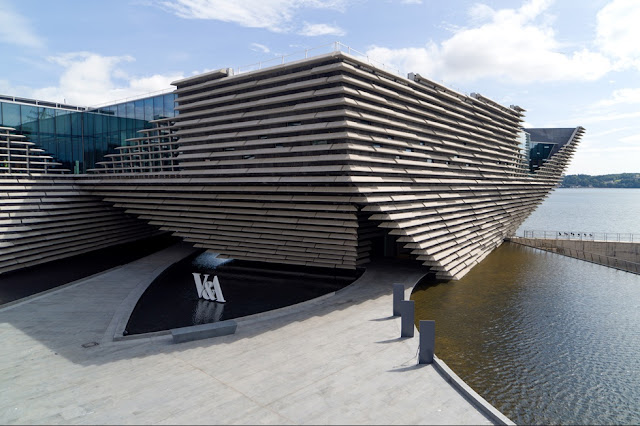 The long-awaited £80 million V&A Dundee museum and gallery – Japanese architect Kengo Kuma’s first UK project – opens to the public this weekend
Kuma won the competition to design the 8,500m² museum on the banks of the River Tay in 2010. The project was originally expected to cost £49 million and to open in 2015.
However its budget controversially rocketed by £31 million, the contest-winning designs were relocated further inland to save construction costs and its opening was delayed by three years.

zoom inzoom out
Kuma’s design was inspired by the cliffs of the nearby Scottish coastline. He said: ‘It’s as if the earth and water had a long conversation and finally created this stunning shape. The design attempts to translate this geographical uniqueness into the building by creating an artificial cliff.’
Perched on land reclaimed from the river bed, the museum is designed as two inverted pyramids which connect higher up the building. These twist both horizontally and vertically as the building gets higher, suggesting a wave-like movement.
The shapes tested engineer Arup, which originally specified walls up to 60cm thick, supported by a huge steel structure. However, after experimenting with the building’s form using 3D models, the thickness of the walls was reduced by half and the steel skeleton redesigned with thinner members. The largest overhang -– the so-called ‘prow’ projecting over the river – extends 19.5m beyond the museum’s footprint.

zoom inzoom out
The exterior is clad with 2,500 precast concrete panels which vary in size and shape to create different shadow patterns throughout the day. Each of the panels – which weigh up to two tonnes and measure up to 4m – was attached to the building using brackets fixed into channels cast in advance into the walls. It took seven months to lift and fix them all into place
The galleries occupy the upper floor, allowing for vast spaces: at 1,100m², V&A Dundee boasts the largest temporary exhibition space in Scotland. The ground floor level is divided by the inverted forms, creating two distinct areas for the main entrance and back-of-house. An exterior walkway passes through the middle of the building, joining the river to the city in the manner of a gateway.

In a city with very little notable Modernist or contemporary architecture, Kengo Kuma’s Dundee V&A could be labelled a genuine shock-of-the-new moment. But this would be offensive to an architect who cannot countenance the idea of self-consciously monumental architecture. He has produced a museum whose spaces and materials he thinks of as ‘particles’, arranged in a bravura cliff-cum-ship form whose prow juts over the waters of the River Tay.
From 200m away, the £80 million building’s appliquéd non-structural façades of gapped, end-on horizontal concrete planks suggest a certain heaviness. But this impression vanishes once the unusual geometry of the form reveals itself in more detail. The three-dimensional shape of the building’s envelope is generated by the rectangular and trapezoidal footprints of two separate buildings twisting as they rise to create a continuous, asymmetrically outlined roof which juts well beyond the two original footprints in several places.
Thus, walking around the outside of the museum, it seems to morph from cliff to ship, and back again. A cave-like grotto, also striated with concrete planks, passes between the two base buildings, and confirms Kuma’s intention to create geometry and surfaces with an organic quality.

SOURCE: HUFTON + CROW
Exhibited inside the V&A Dundee: The Oak Room was created by Scottish designer Charles Rennie Mackintosh for a tearoom in Glasgow in 1907
zoom inzoom out
This is even more obvious in the entrance sequence, another cave-like space aligned with one of the city’s main avenues, Union Street. Visitors enter a huge reception area void – another cave, in fact – which rises to the equivalent of two storeys and, for the most part, follows the angles of the building’s exterior.
And yet this considerable portion of the building’s interior gives almost no overwhelming sense of geometry with a capital G, which is a triumph of sorts. It’s those KK particles again, this time in the form of horizontal rows of down-angled oak panels of irregular length which clothe much of this volume.

These surfaces are punctured with dozens of square portholes giving glimpses of the water, and modulating the qualities of the light. The only other notable feature here is a very wide scala regia which leads up to the top floor where the galleries and restaurant are.
Kuma’s central aim was to create a ‘living room’ for Dundee with a two-fold character: hard but already weathered-looking on the outside; soft and warm inside. In broad terms, he has certainly succeeded. But Kuma’s characteristic dissolution of internal thresholds is not as casual as it appears, not least in the plan geometry of the top floor, which is very clever in the way it produces multiple sightlines from single vantage-points.
The most interesting example of this is the way the restaurant’s triangular plan juts into part of the prow segment of the building. The pointed end of the restaurant is glazed, and from here one can see the raw concrete of the museum’s prow, the Tay, the central void, and much of the rest of the upper floor plate. These aren’t particles; they’re Architecture.
The Dundee V&A is the city’s Bilbao – or perhaps ‘built prow’ – moment. Tourist visitors have increased by 9 per cent since 2015, during which time publicity about the building has ramped. Dundee has been declared one of a new wave of cool cities by both GQ magazine and the Wall Street Journal. There is something satisfying about the fact that the character of this architecture, and particularly the way it receives people, resists that label.

My inspiration always starts from the place where the project will be. I have visited Scotland many times. It is a very beautiful country and I’m truly in love with the Scottish landscape and nature. When we started this competition, the first thing I wanted to do was visit the site. I always want to do this. I would be too scared otherwise. After all, certain things can be felt there and nowhere else.
The uniqueness of this project for us is in the position between the water and the city – it is very different from a normal site as it sits in between land and water. As we started thinking about the project, one of my colleagues showed me a picture of the cliffs of north-eastern Scotland – it’s as if the earth and water had a long conversation and finally created this stunning shape. The design of V&A Dundee attempts to translate this geographical uniqueness into the building by creating an artificial cliff.
For V&A Dundee we tried to produce a design that reflects the two main axes of the city – Union Street and Discovery Point – and then co-ordinate them together in a spiralling motion. The form is inherently dynamic as it grows from the street up.
The building acts like a connector between the river and the city – creating a frame through which to see the river from the city, and to see the city from the river. Dundee was a city built on trade and the river played a vital role. The building acts like a gate through which the city can once again access the world.
The big idea for V&A Dundee was bringing together nature and architecture, and to create a new living room for the city.
I hope the museum can change the city and become its centre of gravity. I am delighted and proud that this is my first building in the UK.
Kengo Kuma