Back in 2016, the Financial Times reported on central government encouraging local authorities to sell their assets - all in the name of 'efficiency' of course, but with a determination to bridge budget gaps:

Councils will sell £129m of land and property in the early stages of what the government hopes will become a much wider push to raise cash from assets, helping to mitigate budget cuts.

In England, 32 local authorities have identified land to build 9,000 homes in the first phase of a Cabinet Office scheme to encourage public sector bodies to reassess their land and property holdings to cut running costs and raise money from sales. Another 100 councils have recently signed up to the scheme.

The Conservatives have long had their eye on public sector land and property as a potential source of both revenue and expenditure savings. David Cameron cited Oxfordshire Council’s assets when he wrote to its leader in September to complain about cuts to frontline services.

The government is spending £38m in grants to help councils pay for professional advice on the process, including drawing up asset registers, mapping land and carrying out feasibility studies. Matthew Hancock, the minister for the Cabinet Office, said the scheme would help councils “save money for taxpayers whilst delivering more efficient public services”.

Jeremy Rowe, a cabinet member at Cornwall Council, which has just signed up for the programme, said it planned to bring fire, police and ambulance services together in several towns, saving money and improving co-ordination.

Councils to sell £129m of land and property | Financial Times

In other words, it's all about 'austerity':
Futures Forum: Local government and austerity

And last year, the FT ran a further piece on the pressures faced by local government:

Ming vases, toilets, farms and historic buildings are being sold to raise cash 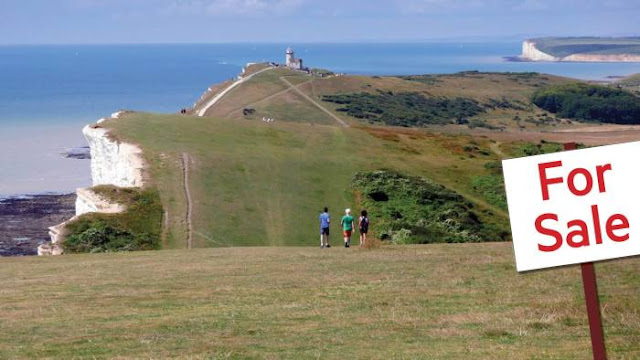 The view towards Cornish Farm near Beachy Head, one of four farms being sold by Eastbourne council © FT Montage/Alamy

Historic buildings, concert halls, works of art and even chunks of the South Downs national park in southern England are being sold by councils to plug holes in their budgets.

In the face of fierce protests, some local authorities have said spending cuts have forced them into sales to raise money for essential services. Others are using the proceeds to fund schemes they hope will create jobs and growth.

Between 2010 and 2015, councils in England and Wales had their main grant cut 40 per cent, leaving them to find £20bn of savings. As austerity extends into its seventh year, government figures show that councils are expected to invest twice as much from asset sales this financial year as the £1.5bn generated from this source in 2013/14.

In southern England, Eastbourne borough council is selling four farms on the South Downs covering 2,900 acres, while Brighton council is selling 120 acres, some of it a site of special scientific interest. The council says it must find ways to offset £18m of cuts in the next financial year and £145m cumulatively by 2020 and that environmental standards and public access will be maintained.

But Brenda Pollack, of Friends of the Earth, said it was “selling off the family silver” and will have “a short-term gain at the cost of greater control over how that downland is managed”.

And a couple of months ago, the Independent looked at the 'great British sell-off':
Austerity-hit councils selling off parks and public buildings at a rate of more than 4,000 a year, research finds | The Independent

As highlighted by Locality:
Save our Spaces: Media Resources - Locality
The Great British Sell Off - Locality

And so, in London, the police must sell off police stations:
Revealed: £1bn of properties sold off by Scotland Yard | London Evening Standard

And housing authorities must sell of social housing:
London tenants to protest at auction of social flats worth £7.2m | Society | The Guardian

And meanwhile, in Devon, it's sale time too:
Cuts of £25M for Plymouth - this is who will suffer most - Plymouth Live
Tempers flare as council decides it will NEVER reopen troubled leisure centre - Devon Live

With drastic measures being taken:

All public toilets could be closing as part of a Devon council's plan to tackle the multi-million pound financial black hole it faces in the next five years.

A West Devon Borough Council report on its medium term financial position reveals that if there is no change to the current level of Revenue Support Grant and the council does not achieve business rates pilot status, they could face a £3.7m budget shortfall by 2023/24.

Even if the level of negative Revenue Support Grant drops and the council does achieve business rates pilot status, they will still be £2.5m in the red.

The council wants to make savings of at least £50,000 and up to £180,000 a year on the 'discretionary' service by reviewing public toilets.