Behemoth: What coal mining does to us

Is coal the future?
Futures Forum: "The disingenuous campaign to promote coal as the solution to energy poverty"

Or the past?
Futures Forum: Peak Coal: the end of coal?

An extraordinary documentary is now out:

As China Hungers for Coal, ‘Behemoth’ Studies the Ravages at the Source 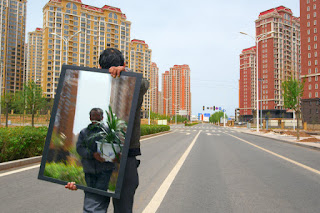 In Zhao Liang’s film “Behemoth,” which uses on-screen text adapted from Dante’s “Divine Comedy,” a coal miner plays a role akin to that of Virgil, the guide, holding a mirror on his back as he leads viewers.CreditCourtesy of Zhao Liang


As China Hungers for Coal, ‘Behemoth’ Studies the Ravages at the Source - The New York Times

The dehumanising impact of coal mining is laid bare in a Chinese documentary whose stunning images speak louder than words
Wendy Ide
There is an extraordinary moment about a third of the way through Zhao Liang’s masterly documentary, Behemoth. The screen goes scarlet. It’s not immediately clear what we are looking at. Then, as we watch, the hellish red begins to take on a form – first, we see the flames of a furnace and then, shockingly, the figures of the men who work there, engulfed in the searing heat and noise. This is closely followed by a shot of a man, staring impassively at the camera, his roasted skin studded with flecks of metal. I sometimes complain about having to watch mediocre movies, but this rather puts that into perspective. At least I don’t have to chisel chunks of molten pig iron from my flesh at the end of my working day.
Making reference to both the Old Testament – the beast of the title comes from the Book of Job – and to Dante’s Divine Comedy, Zhao takes a fiercely lyrical approach to the subject of industrialisation in China and the rapacious appetites that drive it. Travelling around the vast, verdant steppes of Mongolia, the film-maker discovers a paradise soon to be lost to the open cast coal mining that devours the land. Zhao juxtaposes the two worlds in arresting single shots: the frame is divided between the lush grassland that still – just – supports a nomadic community with the ugly grey scars that used to be mountains.

Zhao, who shot the film as well as directed it, has an incredible eye, which was honed by his training and early career as a photographer. It’s perhaps not surprising that the immediate references the film brings to mind are photographic rather than cinematic. Panoramic shots of the mines, and the termite trail of trucks that crawl down the side of these gouged-out wounds in the land, evoke iconic photographs by Sebastiao Salgado of the Serra Pelada gold mine in Brazil. There are also parallels with the work of Edward Burtynsky, whose large-format shots of factories and industrial blight were the subject of Jennifer Baichwal’s documentary Manufactured Landscapes, and withDorothea Lange’s seminal portraits of Americans displaced by the Great Depression.
Zhao’s fly-on-the-wall technique lets the image, rather than the people, do the talking. The characters in his film do not speak, emphasising the film’s recurring theme of the dehumanising effects of the development we take for granted. Humanity takes a dual role here, both as the voracious behemoth and the animals that do its bidding. This is brilliantly captured by a profile shot of a miner, slouched, still wearing the breathing mask that makes him look like some semi-monstrous animal from a Hieronymous Bosch hellscape. And it’s reinforced by Zhao’s choice of words in the sparse, poetic narration that guides us through his journey: he refers to “the creatures who sort coal from rock”.
The photography is all the more remarkable given that Zhao shot much of it guerrilla style, without the permission of the mine owners whose abuses of their workers are all too clearly on show. There is shocking disregard for workers’ living conditions – coal pickers grimly scrape off the coating of inky dust in a filthy room, which looks like the inside of a diseased lung. But the bleakness is punctuated by dreamlike images of a naked human form curled in a foetal position in the blighted landscape. These images give us much-needed breathing space before we plunge into the next circle of hell.
Zhao’s use of music is economical but well judged. The eerie tones of Tuvan throat singers sound like ghosts from a past that is about to be obliterated. And there is a build-up of industrial percussion and reverb-heavy guitar, which bridges the transition from the mines to the iron foundry to riveting effect. For the most part, however, the ever-present noise of heavy industry – the rumble of trucks, the tortured squeals of conveyor belts – forms the soundtrack to the film.
But for all the striking imagery, it’s the final scenes that floor us. Zhao follows the steel smelted from sweat and suffering at the foundry to vast, empty developments: ghost cities, the result of greed and over-eager speculation on the part of developers. The miners, battling to breathe after the onset of pneumoconiosis, the nomads whose land is devoured and the iron-workers who pass each day in an inferno are all just collateral damage in a colossal global folly.
Posted by Jeremy Woodward at 15:56