National Park for East Devon and Dorset: “It is an opportunistic type of approach that people in Dorset are taking about our assets here in East Devon.”

Proposals for a National Park covering the current Dorset and East Devon AONB are gaining momentum:

The Leader, however, dismissed these: 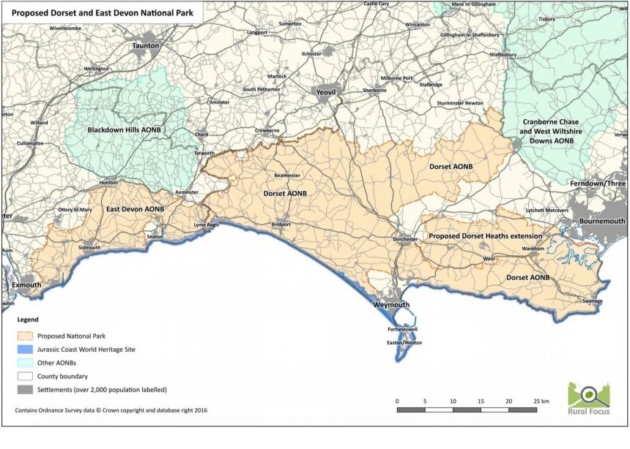 The proposed boundary for the Dorset and East Devon National Park

Campaigners say bid would secure around £10million of annual funding
A national park spanning East Devon and Dorset would boost the economy, protect the environment and ‘significantly’ benefit local businesses, according to campaigners and supporters.
But the leader of the district authority dismissed the bid as ‘an opportunistic approach on the region’s assets’ at a full council meeting last week.
Councillor Cathy Gardner, representing Sidmouth Town ward, raised the issue before members of East Devon District Council (EDDC) and requested an update on what is being done to further the proposals.
In a written statement, she said: “The creation of a national park would add to the attractiveness of East Devon and Dorset for businesses and visitors, as well as benefiting residents.
“An independent report on the economic opportunities presented by a national park has identified the strengths working with national parks bring to local businesses.
“It has suggested that the area might secure some £10million of annual central government funding with more than 90 per cent of this being invested in the local economy.”
Responding to the question, council leader Paul Diviani stated that EDDC is not directly involved in the proposals and awaits further consultation as it progresses through the process of consideration.
When asked if he agrees with claims that a national park would bring significant economic benefits to the district, Cllr Diviani said: “National parks and AONBs are not about making money. The AONBS are much more localised than national parks ever can be.
“It is an opportunistic type of approach that people in Dorset are taking about our assets here in East Devon.”
The Dorset and East Devon National Park Team behind the bid claims the new status is the ‘natural next step’ to protect the area’s greatest asset.
Its proposed area covers the East Devon and Dorset areas of outstanding natural beauty (AONB) – nearly 400,000 acres.
It overlaps with the majority of the Jurassic Coast, from Exmouth to Studland, which has already been recognised as a World Heritage Site.

The East Devon Watch blog was not impressed:

8 AUG 2016
Owl says: how come Dorset is so enthusiastic then? It, too, has assets but seems happy to use them for the greater good.
Of course, assets can be bought by developers … but it is much harder to develop a national park … and our LEP would be very unhappy, as where would those EXTRA 176,000 houses go, over and above those in Local Plans.