The District Council is asking for input for its Villages Plan:

The council has published a draft Villages Plan and accompanying Sustainability Appraisal/Strategic Environmental Assessment and is inviting comments until 28th September 2016.

The documents are available on line at Villages Plan 2016 consultation - East Devon, at local libraries and at the district council offices in Sidmouth. The web page also shows supporting documents that include a habitat regulation screening, a draft consultation statement, an equalities impact assessment, criteria used to define Built-up Area Boundaries and site by site assessments for the settlements involved (hard copies are available to view at the district council offices). A brief summary of the plan for each settlement is also available and has been posted to all properties where a change is proposed to the existing Built-up Area Boundary.

If you have any comments on the draft plan please write to us by Wednesday 28th September 2016 so that we can consider responses before we finalise the plan. You can submit your views by either writing to us at Planning Policy, East Devon District Council, Knowle, Sidmouth, EX10 8HL or sending an email to us at localplan@eastdevon.gov.uk. Please put ‘Villages Plan’ in the subject box of the email or at the top of your letter.

What does this mean for Sidbury? 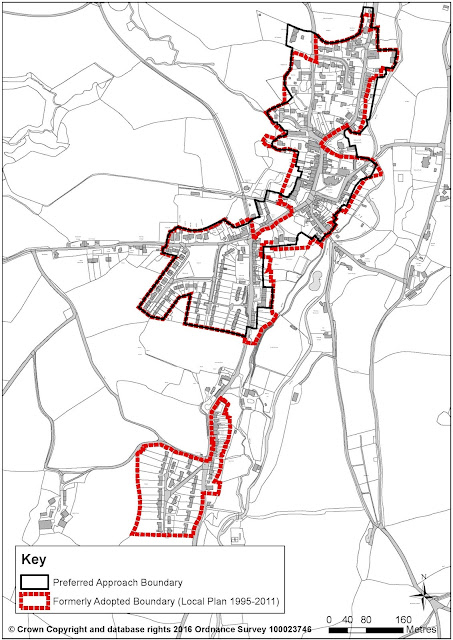 By Exeter Express and Echo | Posted: August 09, 2016 By Alex Richards @AlexRich89
The expansion of some of East Devon's most recognisable villages is at the forefront of a new public consultation. East Devon District Council has begun the eight-week process for its major draft Villages Plan.

The idea is to guide where new developments will go at 14 of the district's larger villages, as well as the town of Colyton. Responses will be looked over by the council's Strategic Planning Committee, before a final version of the plan is produced for yet another consultation.

The Villages Plan will show a black line - the technical term being a Built-up Area Boundary - around the villages. Within the black line, new houses will generally be acceptable, but outside they will only be acceptable in special circumstances.

The consultation gives the public an opportunity to comment on where the lines should be drawn.

The aim of the council's planning policy team is to ensure that the main existing built-up areas are included, together with areas that have already been agreed for development - either through planning permission or planning allocations.

A number of alternatives have already been considered, including not having boundaries, drawing boundaries more tightly or drawing them more loosely.

However, none of these options have been progressed, as they differ from the approach set out in the Local Plan which was adopted in January 2016.

Further research has been undertaken to determine whether the boundaries drawn using the council's existing criteria should be reduced in areas where it is difficult to access local services and facilities on foot. This approach is being proposed for Beer, Newton Poppleford, Uplyme and West Hill.

Planning permission is less likely to be granted for new housing and industry that fall into areas outside the black line, but this does not mean that these homes and businesses are not part of a village in any other way.
The Villages Plan does not affect any changes that residents could make to their homes without planning permission.

Councillor Andrew Moulding, who is Chairman of the Strategic Planning Committee, said: "We will consider all the comments that are made before producing an East Devon Villages Plan for further public consultation. It will then be formally submitted for consideration by an independent Inspector who will decide whether the plan is sound. It is important that we seek the views of the local communities on this plan, which will help in the determination of planning applications."

Communities and residents have until Wednesday, September 28 to put forward any comments they wish to make on the draft plan. The Villages Plan will then be submitted for examination by a Planning Inspector.

The draft consultation Villages Plan and supporting documents are available at the council offices at Station Road, Sidmouth, in local libraries, with the relevant parish councils or online here.