"Law on the Sale of Food Products" >>> every large supermarket in the country must ensure that 51% of the fruit, vegetables, meat, eggs, honey, dairy products and baked goods they stock are "locally sourced"

... a country on the other side of the (current) EU is pressing ahead with protecting its own local food industry - but 'protecting' might be a problem:

Amid all the mayhem and turmoil of recent weeks, here's a news story you may have missed.  The Romanian parliament unanimously passed an amendment to the country's "Law on the Sale of Food Products" bill which states that every large supermarket in the country must ensure that 51% of the fruit, vegetables, meat, eggs, honey, dairy products and baked goods they stock are "locally sourced".  As a demonstration of how enlightened policymaking can unlock Transition, it's an eye-catching and paradigm-shifting piece of legislation.  But is it legal, and, actually, does that matter anyway?

The legislation has been criticised for being "very general" and "pretty confused".  It doesn't really address the thorny question of "what is local?" (a question academics have debated for years).  Does it mean within a certain distance?  Just within Romania? And what about products made in Romania but with ingredients sourced from elsewhere?  It's a tricky and complex thing to nail down but it should lead to some fascinating discussions.  It gets round the seasonal question (as in is it 51% all year around or just in the summer?) by stating that during the winter a maximum of 70% can be imported.

Concerns have been raised that at present, there aren't enough suppliers to meet this huge growth in demand for local produce (whatever that ends up meaning).  The legislation only applies to supermarkets with an annual turnover greater than €2m (£1.7m), and stores that don't comply will initially be fined, or could face being closed down for 6 months. 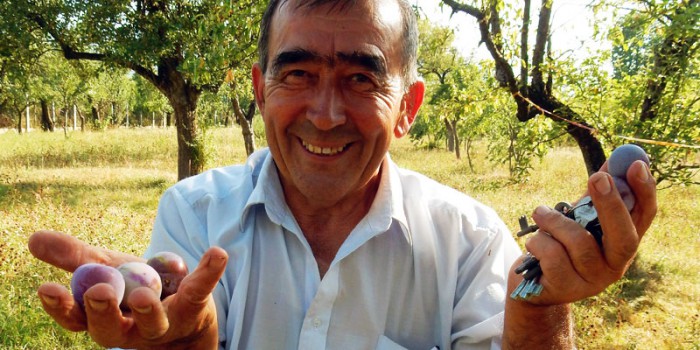 A Romanian farmer showing his plums.

However, as Niamh Michail notes at FoodNavigator.com, "it looks unlikely that Romania has the right to pass such protectionist measures".  It is true that such a policy is in breach of Article 34 of the Treaty of the Functioning of the European Union.

Usually, the threat of being in contravention of EU law is enough to put governments off even thinking about such legislation.  Just as one small example, I remember approaching my local council to ask for a small amount of funding towards creating a local food directory, but being told they couldn't as it would contravene EU legislation around protectionism. 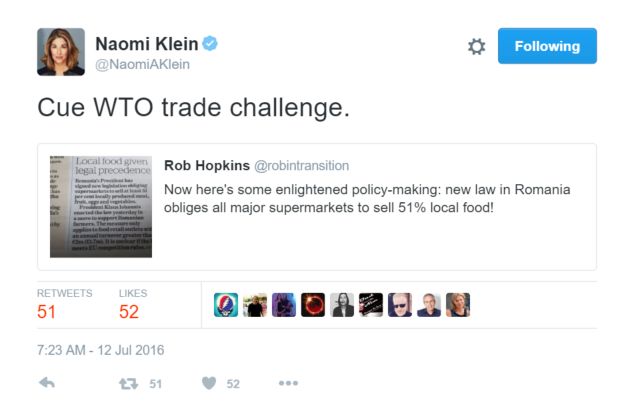 After I tweeted this story, Naomi Klein retweeted it, adding "Cue WTO trade challenge". Michail quotes Lara Skoblikov, an expert in EU food law, who told her that the process would firstly be that the EU would ask Romania to withdraw the law (she is quoted as saying "this preliminary phase can take years"), before any action is then taken. And yes, the WTO might intervene too, as Klein suggests.  But does it matter?

In my usual naive and over-optimistic way, I don't think that a challenge by the EU that will take several years to become legally impactful is really such a big deal.  Let us imagine that this law comes into effect and is left unchanged for 5 years.  That 5 year window could, with the right support and incentives, lead to an explosion of new businesses and enterprises, and a real culture shift.

Romania is in a strong position in having retained much of the small-scale farming that across the EU has been seen as expendable in exchange for economic growth.  But meeting this new demand will need many more bakeries, local food businesses, more land put down to food production, more fruit trees planted, more food processing infrastructure being put into place.  If the government get this right, it could be remarkable.  A recent paper by Nathaniel Page and Răzvan Popa notes: 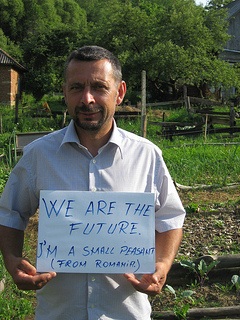 Romania could see a huge revaluing of the role of farming, a whole new generation of young people coming into it in a country where, like elsewhere, the average age of farmers continues to rise.  We could see all kinds of diversity and creativity.  Usually the term 'opening Pandora's Box' refers to unleashing something terrible that once out, cannot be put back in the box.  I don't know what a positive version of Pandora's Box would be ('Iohannis' Box' perhaps, named after the President of Romania?) but that's what I imagine happening.

Research into solar power has shown what is called the "neighbour effect", which is when change becomes infectious.  Studies have shown that more people putting up solar panels inspires more people to do so, and so on and so on.  As more people put them up, the laws change to accommodate solar energy, economies of scales shift, social norms change, it becomes an accepted, and even celebrated, aspect of our daily life and culture.  So why not the same with local food?  Could more bakers beget more bakers who beget more bakers?  That certainly seems to be the experience of the craft beer explosion. And such a shift in Romania, and the benefits it unlocks, would inspire people elsewhere, a "neighbour effect", an amplifying of the reimagining of food and farming already underway around the world.

I imagine a scenario where Romanian shoppers find that the shelves of their supermarkets are now laden with a diversity of local produce, and they are now shopping with a mindfulness of who grew the food they are eating.  They see young people in their communities seized with the opportunities this shift brings, retraining to become bakers, brewers, market gardeners.  Derelict land, a laDetroit, is taken on and transformed into beautiful, intensive market gardens.  National health indicators start to rise as people eat fresher food produced nearer to home.  Farmers, now growing for their neighbours rather than for export, feel more valued and connected.

Are we really to believe that once this 5 year process of creating new markets, new infrastructure, new professionals, new expectations is over, and the EU rules that Romania can't do it, that the supermarkets would backtrack on it?  That people would settle for that and allow all the advances to be rolled back?  I imagine that once all that is in place, and it has become everyday, if anything, people will want more of it, not less, and legislation will no longer be needed.  They may even decide that this new food system actually no longer needs the supermarkets at all, and the retail of food will also become more local and returned into more accountable hands.

I am reminded of Ungersheim in north-eastern France, one of our '21 Stories of Transition'. Here is a short video (in French) that gives you a flavour of what's happening there:

In Ungersheim, all the schools are now 100% organic food, most of it sourced from an organic market garden, Les Jardins de Cocagne, created on land owned by the Comune.  It produces 64 varieties of vegetables, provides 250 baskets of food for local families each week, and runs stalls at 5 markets every week.  The Comune are building a beautiful building which will be a place for processing surplus produce to extend the season and diversity output, creating jobs. The food economy is coming home, and the place is buzzing as a result, offering a compelling narrative that mass imports of food-as-a-commodity simply cannot do.  No-one is ever going to want to roll back what's happening there, and its widely-felt benefits across the board.

Perhaps 5 years is in fact the very window a government committed to reimagining the role of local economies, of community-led development, a reimagining of the role of food and farming in our lives, would need?  With a big push, a compelling narrative, and the right incentives for new enterprises, and with the right protections for biodiversity, soil protection and support for innovative sustainable farming approaches, we could end up at a point from which no-one would want to retreat, EU legislation or no EU legislation, WTO or no WTO, TTIP or no TTIP?
Romania, leading the world as a nation whose key export is a sense of possibility?  Who knew?
Published on July 14, 2016, by Rob Hopkins