Brexit: and scaling back: "businesses will hold off committing to major capital expenditure for a long time to come"

Development proposals can be contentious, to say the least, if not the obvious:
Futures Forum: Quarrying in East Devon > final public consultations on Devon Minerals Plan > All responses so far relate to Straitgate Farm

Here is comment from the Straitgate Quarry campaign group:

How times have changed

Brexit has put the brakes on UK construction; even Aggregate Industries complained at the Venn Ottery Liaison Meeting last month that sales out of Blackhill "have slowed right up" and that production has been scaled back accordingly. As one economist commented:

Brexit negotiations will be protracted, so businesses will hold off committing to major capital expenditure for a long time to come.

Who knows whether AI will change any of its plans? In 2008:
Economic downturn has put movement of plant from Blackhill to Houndaller on hold

With the full piece from the Independent:

UK construction shrinks at fastest pace since 2009 after Brexit vote

Figures for July show PMI for construction industry fell to 45.9 in July from 46.0 in June

UK construction shrank at its fastest pace since 2009 after the UK voted to Leave the EU in June. The figures offer little comfort to prospective homeowners after a damning report from the Resolution Foundation revealed that home ownership has fallen to its lowest level for 30 years. The research shows supply has failed to keep pace with demand in the UK, shutting buyers out of the market.
The Markit/Cips data for July showed that the purchasing managers' index, or PMI, for the construction industry fell to 45.9 in July from 46.0 in June. The index measures new orders, deliveries and employment, among other things, and is considered a key indicator in the confidence of the construction sector. Survey respondents noted that uncertainty following the EU referendum had dampened client confidence, led to greater risk aversion, and encouraged a wait-and-see approach to decision making.
There were some reports that demand had been more resilient to Brexit than expected. But just 15 per cent of firms reported higher activity in July against 23 per cent that reported a decline.
The figures deal a further blow to a sector that was already in recession in the second quarter and has been greatly underperforming the rest of the economy, Markit said. 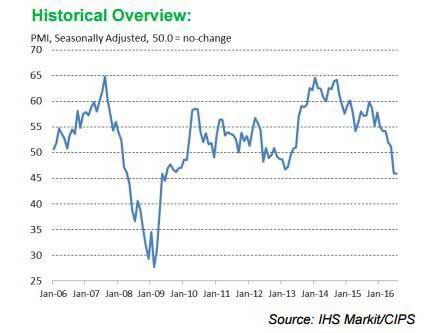 The July reading signalled the fastest overall decline in construction output since June 2009. This largely reflected the steepest fall in commercial building for over six-and-a-half years, alongside a drop in civil engineering activity for the first time in 2016. (Markit)
The sharpest decline came in commerical activity, which fell for a second month running and at the fastest pace since December 2009 as investment in offices, industrial units and retail space slumped.
Housebuilding also fell sharply, down for a second straight month but at a slightly slower pace than in June. The average drop in housebuilding over the past two months has been the most severe for seven years.
Employment in the construction sector fell for the first time since May 2013, with voluntary leaves not being replaced and a sharp decline in sub-contractor availability.
Tim Moore, senior economist at Markit, said: “July’s survey is the first construction PMI compiled entirely after the EU referendum result and the figures confirm a clear loss of momentum since the second quarter of 2016, led by a steep and accelerated decline in commercial building."

David Noble, group chief executive at the Chartered Institute of Procurement and Supply, described the construction sector's downhill course as "a seriously disappointing development". "The picture is still unclear around whether this direction is fixed for the coming months or is a short-term reaction and the aftershock of the UK’s referendum decision," he said.

UK construction shrinks at fastest pace since 2009 after Brexit vote
.
.
.
Posted by Jeremy Woodward at 02:38