The Dept of Food is now doing its bit for British food: 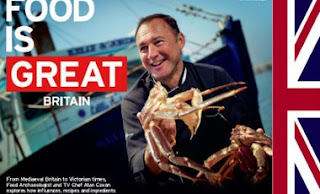 THE government has launched a food tourism grant scheme it hopes will boost the rural economy.
Launched by Defra, the Championing Great British Food Tourism funding scheme seeks to help improve the viability and profile of food businesses and rural tourism.
It is offering grants of between £5,000 and £25,000 to projects that aim to promote "stronger local food identities".
The government believes the scheme will help to increase the attractiveness of rural destinations to tourists. It also hopes to encourage greater expenditure within local economies and an extension to the tourism season.
Projects eligible for funding must be in the form of food and drink based attractions. These could include as trails, festivals, markets or other initiatives providing opportunities to attract visitors at different times of the year.
The scheme follows the launch of an Environment, Food and Rural Affairs (EFRA) Committee inquiry into rural tourism in July. MPs said that while rural tourism provided around £17bn a year to the English economy, the countryside faced numerous obstacles to tourism growth. Domestic overnight trips to rural areas fell from 22% to 18% between 2012 and 2014, according to Visit England statistics. Meanwhile, 50% of international visitor spend is in London.
The scheme has been welcomed by rural leaders – including the Country, Land and Business Association. CLA eastern region director Ben Underwood said it was important to raise the profiles of the people behind regional food and drink – as well as the aread in which they are based.
"Small-scale producers and rural tourism businesses do an enormous amount to generate revenue and create jobs in local communities," said Mr Underwood. "It makes perfect sense to encourage projects promoting an area's food producing heritage or emerging strength."
Mr Underwood said there was a "real need" to make rural tourism more effective and profitable. He added: "It is crucial the government finds ways, such as through the Championing Great British Food Tourism Grant Scheme, to create opportunities for growth, encouraging the viability of rural communities. It is important that we get people, from home and abroad, seriously looking at our rural areas as attractive tourism destinations."
The deadline for applications to the grant scheme is 9am Monday 26 September 2016.
More information regarding eligibility and the application process for the Grant Scheme is available here. For further details, visit www.greatbritishfoodcampaign.com.