Who and what do we believe when it comes to the shape of the economy?

In yesterday's Telegraph, the view was expressed thus:

The hardcore opponents of British self government, not least the Governor of the Bank of England, the CBI, the underperforming overpaid fat cats of many major companies, the BBC, Financial Times, the Islington Guardianista and of course EU Commission's pensioners increase the volume of their grim forebodings even as the economic news gets better.

The vast forces of the anti-Brexit elite are already regrouping. Theresa May must resist them

And true to form, the Guardian has been increasing its volume of grim forebodings:
Infrastructure spending nosedived after Brexit vote, figures show | Business | The Guardian

However, Vanity Fair points to the 'other elite' who pushed for Brexit:

The national titles were split—in terms of circulation—with 82 percent of total coverage in favor of Brexit, perhaps the more sensationalist position.

There’s a lot of denial, especially among Brexiteer journalists, who are snatching at the slightest piece of good news. The London Standard ran a headline based on the latest Ipsos Mori poll suggesting that post-Brexit confidence was growing. But when you look at the poll in detail, you discover that optimism has declined by 15 points and that 43 per cent of people thought the economy would get worse.

There is much the same disdain for reality among the rich and powerful who supported the Leave campaign with money and endorsements—business figures like James Dyson, he of vacuum-cleaner fame; Tim Marrin, of Wetherspoons pubs; and insurance millionaire Arron Banks—and many peers like Lord Lawson, Lord Lamont, Lord Cavendish, and Viscount Ridley. None of them will concede the dangers to the British economy or indeed to the United Kingdom, which may eventually break up because of a marked difference between the English, Scottish, and Northern Irish sentiments about Europe.

Essentially, they leveraged the understandable discontent of people who had suffered since the 2008 depression for their own agenda, which runs from romantic isolationism to something much more sinister. Either way, they will be the very last to suffer from Brexit’s catastrophic effects. They have their yachts and their estates. They will never notice the sudden rise in the price of food.

Back to the Telegraph - but the devil is in the detail - and in how the damned statistics are framed:

The City of London feared the referendum, and shares were hit hard by the vote - but the latest economic data is reasonably positive

Unemployment is down, prices are steady, shoppers are confident and the government ran a budget surplus in July.

The first economic data for July – the month following the Brexit referendum – was published this week, and shows no signs of an immediate economic collapse. It is early days and a slowdown is still expected, but the data are reassuring so far.

Campaigners such as former Chancellor George Osborne warned that a vote to leave the EU would cause “a profound economic shock”, and stock markets dived following the result.

But since then share prices have risen back above their pre-vote levels and fears of a recession are falling.

Here are the latest figures showing the UK’s performance since the vote. 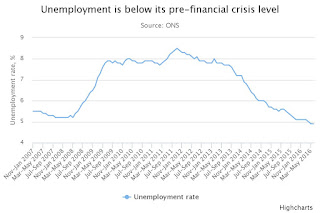 The number of people claiming unemployment-related benefits dropped in July, falling 8,600 to 736,300. Figures from the Office for National Statistics also showed a substantial rise in employment and a 52,000 fall in unemployment in the three months to the end of June, indicating that there was no crash in hiring or rise in firing around the referendum.

Unemployment now sits at 4.9pc, its joint-lowest rate since 2005. The employment rate of 74.5pc is at the highest level since these records began in 1971. There was a slight hint of caution, however – the number of vacancies reported by employers slipped 7,000 compared to the previous quarter to 741,000, showing hiring rates may have slowed since the start of the year.
Consumer spending: up 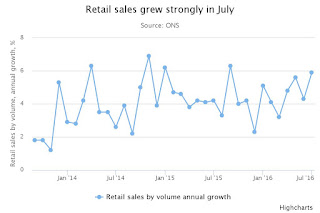 Britain’s shoppers went on a spending spree in July, sending retail sales up 5.9pc compared with the same month a year ago. Sales of goods such as jewellery and watches jumped particularly sharply, as well as shoes and vintage goods.

The boost may not all be generated by British households, however – the falling pound means goods in UK shops are suddenly cheaper for tourists, who may have gone on a splurge. Economists believe strong consumer spending should help support growth and reassure businesses that are worried by the referendum result. 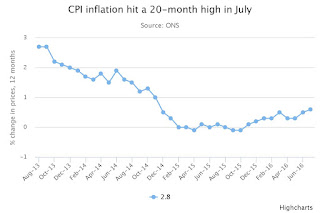 Consumer prices increased by 0.6pc in the 12 months to July, staying well below the Bank of England’s 2pc target.As wages increased by 2.4pc in the 12 months to June, workers’ spending power increased by 1.9pc on the year – a positive sign for households and for the wider economy.Inflation did tick up from 0.5pc in the year to June, however, and in July hit the highest rate for 20 months. The price of imported goods will rise because of the pound’s weakness, pushing up inflation further. Economists believe inflation will hit 2pc next year with some even forecasting CPI of 3pc by the end of 2017. If that outstrips wage growth then, in time, consumers will suffer a hit to their spending power. Budget deficit: worse 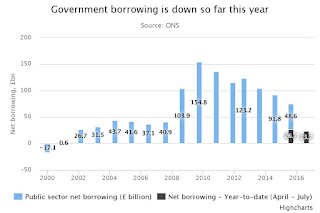 The government has already warned that it will abandon its previous plans to run a budget surplus by the end of this parliament, and July’s borrowing figures showed the first sign of that. Although the Treasury ran a surplus of £1bn in the month – receiving more in taxes than it spent – that is down £0.2bn on July of 2015.For the year so far the government's annual borrowing is down £3bn compared with 2015’s performance, but the first post-referendum number shows a deterioration for the month. Although tax payments reflect in part business activity that has already taken place, any slip in financial performance could be a sign that the government’s plans were already moving off track before the vote – so the Treasury is in a worse position to cope with any economic slowdown in the months ahead.
Forecasts: no recession 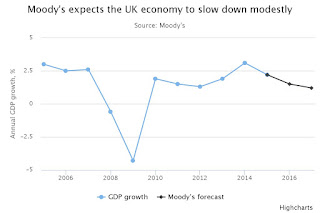 The latest economic forecast from credit ratings agency Moody’s predicts the UK will slow down modestly, but will not enter a recession. Its reassuring numbers expect growth of 1.5pc in 2016 and 1.2pc in 2017 – not signs of a boom.

And:
Futures Forum: Brexit: and looking beyond revolt: "If we’ve learned one thing in the last week, it is that communities – not Westminster - must agree what works for them."
.
.
.
Posted by Jeremy Woodward at 01:00