Campaigning for a safe cycle path for Sidford to Sidbury

Last month, plans were published for an innovative way to get cycles across the main road in Sidford:
These changes to East Devon's cycle routes include Devon's first tiger crossing | Exeter Express and Echo
Plans for Devon’s first ‘tiger’ crossing to link Sidbury and Sidford - News - Sidmouth Herald

This was seen as the 'first stage' of the route between Sidford and Sidbury:
Futures Forum: 'First stage' of Sidford to Sidbury cycle/walkway ........... 'could be installed in the autumn'

However, when the rest of the cycle/pedestrian path is completed is another matter:
Futures Forum: Breaking news: Planning application for Sidford to Sidbury cycle/walkway WITHDRAWN

The campaign for a safe route between Sidford and Sidbury has been going on for years:
Futures Forum: Cycling: meeting in Sidmouth Monday 20th May
Futures Forum: Futures Forum cycling meeting 20th May: press release

A local campaigner is pushing for something to be done - after years of asking what's happening:


No back-pedalling on safe cycle path promise to Sid Valley 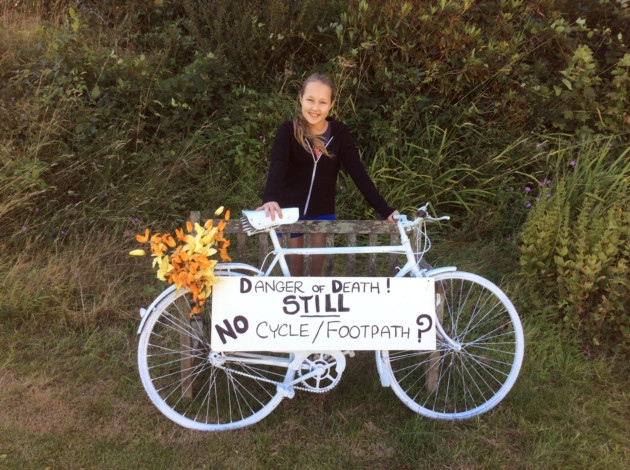 Devon’s highways chief has assured a campaigning schoolgirl that there will be no back-pedalling on commitments to a new cycle path in the Sid Valley.

However, county councillor Stuart Hughes has expresssed fears that the issue could be used as a ‘bargaining chip’ in a major planning application.
Councillor Hughes spoke on the matter after Dominique Webb, 11, installed a sign between Sidbury and Sidford warning that the continued lack of a safe route for pedestrians and walkers means there is a ‘danger of death’.
Devon County Council (DCC) submitted plans for a cycle and footpath last year – but withdrew its application after being given assurances a route would be delivered as part of a new 9.3-acre business park.
Dominique’s grandfather, Sidbury resident Andrew Webb, said: “Every summer, Dominique stays with us and each year she gets more frustrated when she finds the footpath cycle track hasn’t been installed. She can see like the rest of us that it’s an accident waiting to happen and could be a fatal one. I find it incredible that a child has to point this out to the planners. It’s undoubtedly one of the most dangerous stretches of road in East Devon for both cyclists and pedestrians. There are near misses every day”
Dominique, who lives in Singapore and first spoke out on the issue at the age of five, said: “When we want to cycle to Sidmouth we have to put our bikes in the back of Grandpa’s van and take them to Sidford where we can safely cycle on to Sidmouth through The Byes.”
The proposed footpath and cycleway now forms part of a Section 106 agreement – a deal to mitigate the impact of a development – between planning authority East Devon District Council (EDDC) and the business park applicant, Fords of Sidmouth.
Andrew argued that DCC should make a start on the route, from Burnt Oak to as far as the long grass verge in front of the sewage works – and the money could be recouped if and when the business park gets the go-ahead.
Cllr Hughes said that, in light of the business park applicant’s offer to provide the cycleway, DCC had ‘no alternative’ but to withdraw its proposals.
“This now appears to be being used as a bargaining chip for the business park,” said Cllr Hughes. “My personal view is that the cycleway/footpath should be provided no matter what and prior to any development, should it be approved.”
An EDDC spokeswoman said, if approved, the cycleway will be provided by Fords, rather than DCC.
Fords of Sidmouth was approached for comment, but had yet to do so before theHerald went to press yesterday.

With the same story on the front page of the View from Sidmouth:
Schoolgirl’s protest on lack of cyclepath - View News
.
.
.
Posted by Jeremy Woodward at 13:30