Devonshire hedgerows and verges: sowing wildflowers - but allowing use of neonicotinoids

Bees need all the help they can get:
Futures Forum: Challenging toxic chemicals on the farm >>> the award-winning documentary 'The Real Dirt on Farmer John'
Futures Forum: Lobbying over the Roundup weedkiller >>> again >>> crunchtime: Tuesday 14th June

We can do our bit:
Futures Forum: Join the Great British Bee Count!

And the County Council have been considering how to do their bit:
Futures Forum: Devonshire hedgerows and verges - and whether or not to use neonicitinoids

The full County Council met last week - and this was on the agenda:
Agenda for Council on Thursday, 28th July, 2016, 2.15 pm | Democracy in Devon

Here is a report from Cllr Claire Wright's blog:

Friday, 05 August 2016 by Claire
Devon County Council strengthened its policy on wildflower seeding but stopped short of taking a strong position against bee killing pesticides, at last week’s full council meeting.
The pollinator action plan which was debated last Thursday (28 July), was created following a motion by Cllr Gordon Hook who wanted the council to ban neonicitinoids (neonics) on its land. 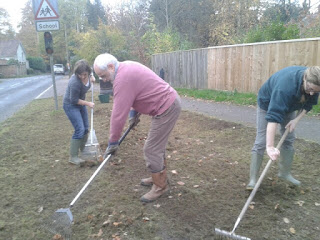 The pollinator action plan said it would “identify and promote” alternatives to neonics (which are linked to bee deaths) on county farms estates and that tenants would be encouraged to sign up a pollinators’ pledge.
The plan, however, stopped short, however of opposing their use.
I submitted an amendment which proposed to do just this, arguing that although the council could not enforce a ban on its farm tenants, it could make a strong statement against neonics - and certainly ban their use on highways and pavements.
I read out a letter to council leader, John Hart, from Harry Barton, chief executive with Devon Wildlife Trust who urged him to resurrect the council’s previous position which was issued in a tweet in April, which read:  “DCC will endeavour to stop using bee harming pesticides on its land and encourage other bodies to do the same. “
The pollinator action plan quoted from a sobering DEFRA report:  “There has been a severe decline in the diversity of wild bees in the countryside … England has the greatest decline of anywhere in Europe. Since 1900 the UK has lost 20 species of bees. A further 35 bee species are considered to be under threat of extinction.”
The report went on to say that the reasons for the bee decline were linked to disease, climate change, habitat loss and pesticide use.
But conservative councillors argued that neonics aren’t used much on council land anyway so it was not necessary to ban them – a completely invalid reason in my view.
Conservative environment portfolioholder, Cllr Roger Croad, read out a statement which sounded very similar to part of Harry Barton’s letter and asked me if I was prepared to accept it. I queried it as it didn’t appear to be a formal amendment, only a statement, in which case it would not be incorporated into policy.
It was indeed, not proposed to be incorporated into policy.
Several councillors spoke in favour of my amendment, but the end result was that the conservatives block voted it down, against a collective vote in favour by the labour, libdem and the non-aligned independent group.
There is some positive news though!  My amendment requesting that the council’s policy is much stronger on promoting and supporting communities to seed wildflower verges – something I have been active on since my election - was approved unanimously.
I hope that the council will eventually tighten up its politically safe, but misguided position on neonics in the future.
See also http://www.claire-wright.org/index.php/post/what_do_do_with_untidy_roadside_verges_and_a_backtrack_on_banning_bee_killi
To view the debate – as well as discussions on Brexit and devolution, see the webcast here - http://devoncc.public-i.tv/core/portal/webcast_interactive/222092
Photo:  Preparing the ground with Dick Beardsall (West Hill Residents Association) and Emily Stallworthy (Devon Wildlife Trust) for seeding wildflowers in autumn 2013.