The latest message from the 10:10 campaigning group enthuses about how renewables and grazing animals can coexist perfectly happily: 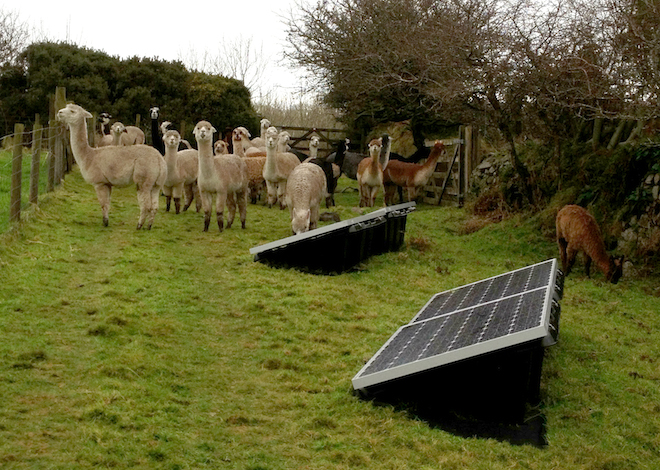 You would expect solar panel companies to do the same:
Grazing | Solar Panels for Agriculture | Lightsource
Grazing & Livestock | Sun and Soil

Construction on the ten-acre site took just under six weeks to complete. The land between and around the solar panels is now grazed by the farm’s existing flock of sheep while its free range chicken business continues to operate close by.

We have enhanced existing hedgerows by planting native species while the perimeter of the site is now managed as species-rich grassland, great for nesting and foraging sites for wild birds. We have sown a wild flower meadow in and around the panels which is carefully managed by grazing and also helps to attract pollinating insects and a wide range of other wildlife.

There are even companies who specialise in such services: 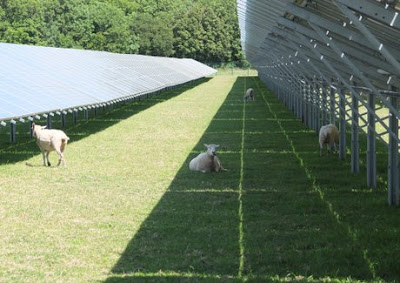 Meanwhile, there is plenty of discussion on-line:
Solar Farms and Sheep. - The Accidental Smallholder

And more research is being carried out:

Solar is booming but solar parks could have unintended climate consequences


Little is known about solar parks' impact on plants, soil and climate. A better approach to research could idenitfy risks and develop new solar parks that provide environmental benefits

In the UK, combining solar with grazing livestock is fairly common, but again, we don't know what the implications are for the animals and the grass they are grazing on. At Piedmont Biofarm in North Carolina they are trialling the use of solar panel arrays installed at height to provide shade to enable the growth of crops that cannot survive in the direct sunlight.

A trial study in southern France has demonstrated that by reducing the density of the solar panels by half, it was still possible to grow lettuces on the land underneath them. If the 'new climate' created by a solar park is not conducive to crop growth, there may be ways to change the solar PV park, to innovate, to promote better conditions through less intensive clustering of the solar arrays, supporting systems of irrigation, or trials of different types of crop.

Next generation solar PV parks could have a particularly important role to play in hot regions where both food and energy are scarce. For example, in the rural communities of Tanzania access to electricity is scarce and food provision an ongoing and ever-increasing challenge. While 'intercropping' (planting two crops close together, so that one is used to improve the yield of the other) can provide shade, there is vast potential for solar panel arrays to maximise both electricity and food production with the right targeted investment. Solar PV parks could increase the amount and diversity of crops grown in such areas and reduce the reliance on expensive 'dirty' fuels that can damage people's health.

In such a fast-moving area of technology, backed by government funds and big business investment, where there is so much expectation and hope, we can't afford to lose sight of the bigger environmental picture. There are both negative and positive elements. We don't understand the extent of the implications of the change in land-use and problems involved, but actively addressing the challenges provides opportunities.

Solar parks could be contributing a great deal more. A more co-ordinated and integrated effort between industry, policy and researchers is now needed, working together on a network of sites internationally to see what's actually happening and to develop the next generation PV parks that provide multiple benefits from the same land area. 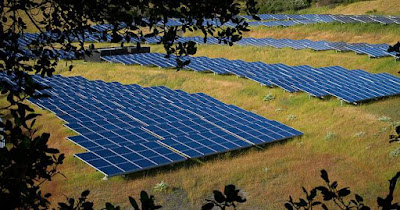 Any time I write about solar farms promoting increased biodiversity, somebody somewhere will call BS. However, a new study from the UK's Solar Trade Association(yes, we should take it with a pinch of salt!), reported on over at Cleantechnica, adds weight to the argument that solar farms can be a net positive for the environment—even before you factor in the benefits of emissions savings.

Looking at 11 solar farms across the UK, and comparing those farms to adjacent plots of land on the same farms that were under similar management practices prior to solar installation, researchers found a significant increase in bird diversity, broadleaf plant diversity, wildflowers and many other species. This benefit held up both for solar farms that were specifically managed with biodiversity benefits in mind (for example, seeding the surrounding area with wildflowers)—but there was also an increase in biodiversity on solar farms that were periodically grazed.

Exactly why solar farms are of benefit is probably due to a combination of factors, say researchers. The switch from monocultural arable land to more diverse plant species will no doubt help biodiversity, as will the addition of shaded areas and structures for perching/nesting. And because grazing among solar farms is a more complex operation, the reduced stocking density and frequency of grazing will help to encourage a broader array of plants and species that rely on them.

Unsurprisingly, those farms that were being actively managed for wildlife benefits showed the biggest benefit to wildlife. (Duh!) And that may add credence to some critics who argue that turning land into nature reserves would be more beneficial than covering it in solar panels—but that kind of misses the point. Farmers are in the business of making money from their land. And installing a solar farm can be a very effective way of doing just that, while also creating space for wildlife too.

That's not to say that dedicated wildlife sanctuaries are worthless. But solar farms being managed for biodiversity benefits are a great way to increase the amount of land we give over to nature, while also combating emissions and reducing the threat that climate change poses to every single species on this planet.

In the meantime, the RSPB thinks it's a good idea: 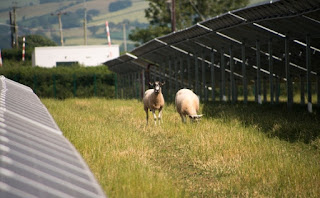 Sheep grazing at an existing light-source in Devon

Energy services firm Anesco has teamed up with wildlife charity the Royal Society for the Protection of Birds (RSPB) to encourage more wild animals to settle at its solar sites across the UK.

The new partnership, announced today, will see RSPB work with Anesco to develop a set of recommendations to ensure its solar farms offer the best environment to support some of the UK's most threatened bird, insect, and small animal species.
The move also builds on solar industry efforts to turn solar farms into biodiversity or grazing hubs in response to criticism projects can eat into usable agricultural land or habitats.

A growing number of projects combine solar farms with grazing for livestock and hedgerow habitats for wildlife. Moreover, in 2014 industry body the Solar Trade Association (STA) published guidance on how to ensure solar projects can best enhance biodiversity in an area.

Anesco partners with RSPB to boost solar farm birds and bees
.
.
.
Posted by Jeremy Woodward at 15:12

You might qualify for a new solar program.
Click here and discover if you are eligble now!