Beach Management Plan: and the future of Alma Bridge

The chair of one of the key 'stakeholders' has been helping to put these together: 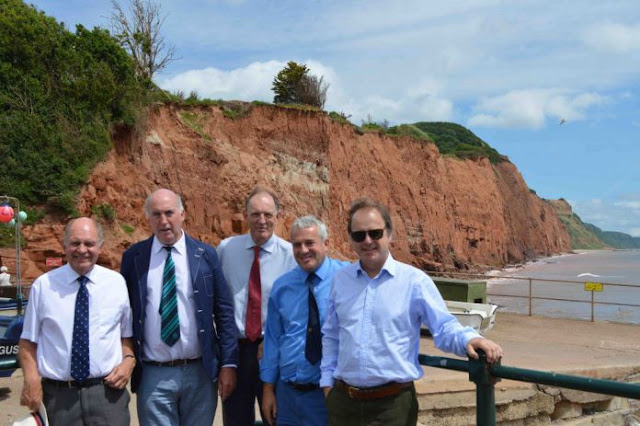 Natural England, the government’s advisory body on the natural environment, has played and will play a role in a number of high-profile projects in East Devon including the redevelopment of part of Sidmouth seafront and the beach management plan.

Mr Swire said he wanted the environmental boss to ‘see for himself’ the proposed redevelopment of Sidmouth and Mr Sells also discussed the beavers on the River Otter over lunch with Mr Swire along with Harry Barton from the Devon Wildlife Trust.

Mr Swire said he was ‘particularly pleased’ that Mr Sells expressed, on behalf of Natural England, his ‘wholehearted’ support for the replacement of Alma Bridge in Sidmouth.

“Natural England have been, and still are, closely involved with some very important projects here in East Devon. I wanted to bring Andrew Sells down so that he could see for himself and discuss the plans for, as well as the Shoreline Management Plan, with local councillors and council officers. I was particularly pleased that Andrew gave his support for the building of the replacement Alma Bridge in Sidmouth. This support is crucial in order for the project to go ahead.”

Here is a little more information on plans for Alma Bridge: 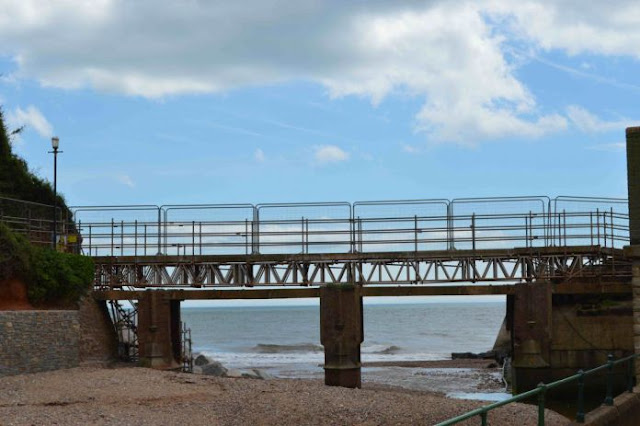 WORK on preliminary designs for a new bridge further inland from Alma Bridge in Sidmouth is continuing, Devon County Council has confirmed.

Following the recent launch of East Devon District Council’s Beach Management Plan consultation on options to manage coastal and flood defences for Sidmouth seafront and East Beach, the County Council has repeated its commitment to getting the scheme for a new bridge ‘shovel-ready’.

Initial discussions have been held with Sidmouth Town Council, East Devon District Council, South West Water, and the Environment Agency on the proposals for a new bridge to cross the mouth of the River Sid.

The County Council remains committed to maintaining a link to the coast path, and the authority is carrying out detailed surveys and geotechnical work to see if the Hanger Path, on the east side of the river, can be re-routed so that it isn’t threatened by the ongoing East Cliff erosion.

Councillor Stuart Hughes, Devon County Council Cabinet Member for Highway Management and Flood Prevention, and local County Councillor for Sidmouth, said: “We are continuing with the preliminary design work on this new bridge scheme but it’s still in its early stages and costs have not yet been estimated. Depending on the final location of a new bridge, additional funding may be required for the associated ramp structures and we are working with all interested parties to secure funding for possible upstream options. This could incorporate a ramp structure on the western side of the river that would also enhance flood protection for Sidmouth Eastern Town.”

Weekly inspections of the existing temporary bridge are ongoing to ensure it is safe to cross.

If safety concerns are raised over the bridge, it will be closed and the footbridge at Mill Street, which is 350 metres upstream, will be used as an interim alternative.

Devon County Council will continue to consider whether the bridge could be constructed in advance of the preferred BMP scheme, which could help minimise the duration of a temporary inland diversion of the South West Coast Path.

This idea has been mooted for some time:
New, inland structure to replace Sidmouth’s Alma Bridge? - News - Sidmouth Herald
Plans drawn up for new bridge in Sidmouth | News centre

A NEW bridge across the River Sid is a possibility, delegates of a Pathfinder meeting in Sidmouth have been told.

At the meeting, hosted by Devon Maritime Forum, Sidmouth town councillor Simon Pollentine explained how a new bridge could be sited 40 metres upstream at a higher level and joining the existing footpath on the east side at its first Z-bend.

Councillor John Dyson, who attended an earlier DMF meeting this month, said both Defra and the Environment Agency were re-examining the position after the Pennington Point area had eroded more than expected.