The BMP has had several options to consider:
Futures Forum: Beach Management Plan: compiling a short list of options

The public have been given opportunity to comment and chose:
Futures Forum: Beach Management Plan: "It is very important to get comments in: the public is in a very strong position to comment on which option it believes will deliver the best seafront for the town - and DEFRA will take that into consideration."

Now the Town Council have made their preference clear: 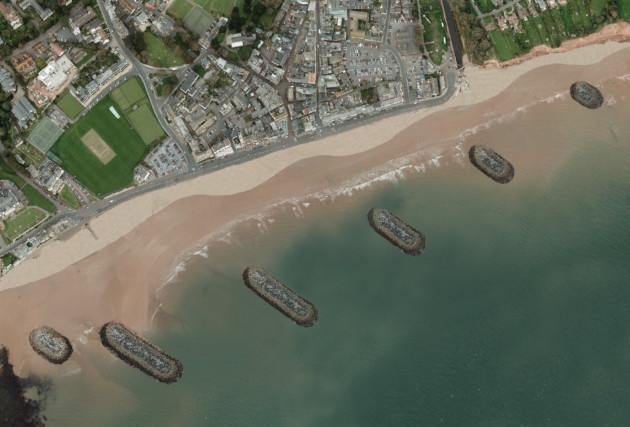 The alternative to Option Four, with the breakwaters rotated

Civic leaders have backed plans for more breakwaters to shore up Sidmouth’s seafront – arguing it is the best option to secure the resort’s tourism industry.


Town councillors agreed that their voices were stronger together in the response to Sidmouth’s beach management plan (BMP) consultation.
They backed option 4B, a scheme with four additional semi-obscured offshore ‘reefs’ that decrease in size towards the east beach.
At £20million, it is the most expensive option – more than double the cheapest – and East Devon District Council (EDDC) will have to weigh up the costs and benefits before it proceeds with implementing its chosen scheme.
It is entitled to between £5million and £6.75million from central government, so to make up the balance, it will seek funding from other local authorities, residents and businesses, developers, plus other grants such as the lottery.
Speaking at Monday’s town council meeting, chairman Jeff Turner said members could not give a technical assessment, but could give a view on the aesthetics of the different schemes.
He joined the Sid Vale Association, Vision Group for Sidmouth and other town representatives – who now have their own BMP sub-group – in support of option 4B.
Members heard that its additional breakwaters could help develop a sandy beach, as can be seen on the western end at low tide, and could be of a level not seen at high water. A technical assessment is yet to be conducted.
Cllr Louise Cole said: “Regeneration of the beach is going to have a massive impact on tourism, and on families coming, in particular.”
Cllr David Barratt said 4B would have the ‘greatest positive effect’ on tourism.
Members voted to support 4B as a council.
The original option four proposed four new breakwaters parallel to the seafront.
The other options considered included building more groynes on the shore or changing their shape, and replenishing the shingle.
The BMP consultation closed on Tuesday and the decision will now go to EDDC’s cabinet members.