Brexit: and democracy: "Ordinary voters never took much interest. Perhaps they didn’t care whether they were ruled by a faraway elite in Brussels or ditto in Westminster."

There are hopes that Brexit will bring 'greater democracy and progress':
Futures Forum: Brexit: ProgrExit and the Transition Town movement

And as far as the most pressing issue for East Devon, things don't look too good:
Futures Forum: Brexit: and local democracy ... of devolution and cuts in local goverment
Cabinet to rubber-stamp devolution deal with no consultation with members or public | East Devon Watch

Much of the debate around Brexit has been characterised as a 'revolt' against elites:
Futures Forum: Brexit: and looking beyond revolt: "If we’ve learned one thing in the last week, it is that communities – not Westminster - must agree what works for them."

The FT has a different take on things:

Brexit: a coup by one set of public schoolboys against another 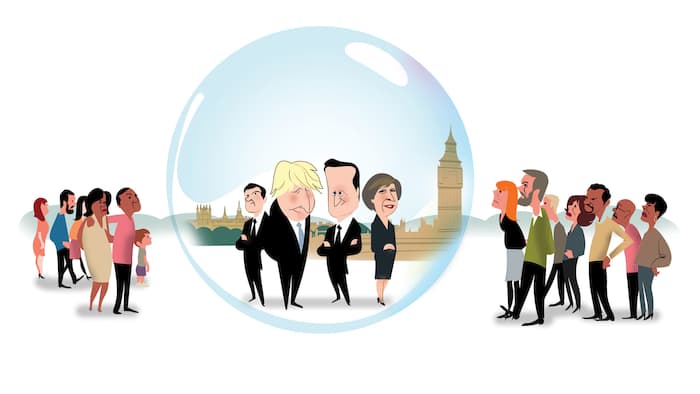 YESTERDAY
by: Simon Kuper
To understand the situation the UK has got itself into, it helps to know that Brexit isn’t simply an anti-elitist revolt. Rather, it is an anti-elitist revolt led by an elite — a coup by one set of public schoolboys against another.
I went to university with both sets, and with hindsight I watched Brexit in the making. When I arrived at Oxford in 1988, David Cameron, Boris Johnson and Michael Gove had just left the place. George Osborne and the future Brexiters Jacob Rees-Mogg and Daniel Hannan were all contemporaries of mine.
I wasn’t close to them, because politically minded public schoolboys inhabited their own Oxford bubble. They had clubs like the Bullingdon that we middle-class twerps had never even heard of. Their favourite hang-out was the Oxford Union, a kind of children’s parliament that organises witty debates. A sample topic: “That sex is good … but success is better”, in 1978, with Theresa May speaking against the motion. May is now running for Tory leader without the usual intermediate step of having been Union president, though her husband Philip, Gove and Johnson did all hold that post. (Beautifully, Gove campaigned for Johnson’s election in 1986.)
You could recognise Oxford Union “hacks” by the suits they wore, though none took it as far as Rees-Mogg, a rail-thin teenager who promenaded along Broad Street dressed like a Victorian vicar with an umbrella. Three times a year, when the Union elected new officers, the hacks would go around town tapping up ordinary students with the phrase, “May I count on your vote?” The traditional climax of a Union election was one Etonian backstabbing another for the presidency.
It’s no coincidence that the Houses of Parliament look like a massive great Gothic public school. That building is a magnet for this set. Whereas ordinary Britons learn almost no history at school except a UK-centric take on the second world war (as evidenced in the Brexit debate), the Union hacks spent their school years imbibing British parliamentary history. Their heroes were great parliamentarians such as Palmerston, Gladstone and Churchill. I don’t think most Union hacks dreamed of making policy. Rather, Westminster was simply the sort of public-school club where they felt at home — or in the case of middle-class wannabes like Gove, aspired to feel at home.
Their chief interest was oratory. From age six they had been educated above all to speak and write well. After Oxford, Union hacks usually found jobs in communications: Cameron went into PR, while Gove, Johnson and Hannan became journalists churning out the kind of provocative essays that are valued at Oxford. Osborne applied to do likewise at the Economist but was turned down at interview by my FT colleague Gideon Rachman. Only Rees-Mogg went into finance, possibly because his dad had already been editor of the Times.
The autumn I started university, Margaret Thatcher gave her legendary anti-European “Bruges speech”, and this set began obsessing about Brussels. Ruling Britain was their prerogative; they didn’t want outsiders muscling in. Tory “Euroscepticism” is in part a jobs protection scheme akin to Parisian taxi drivers opposing Uber.
The public schoolboys spent decades trying to get British voters angry about the EU. But as Gove admitted to me in 2005, ordinary voters never took much interest. Perhaps they didn’t care whether they were ruled by a faraway elite in Brussels or ditto in Westminster. And so the public schoolboys focused the Brexit campaign on an issue many ordinary Britons do care about: immigration. To people like Johnson, the campaign was an Oxford Union debate writ large. Once again, their chief weapons were rhetoric and humour. In Britain, humour is used to cut off conversations when they threaten either to achieve emotional depth or to get boring or technical. Hence Johnson’s famous, “My policy on cake is pro having it and pro eating it”, a line that doesn’t seem quite so funny now.
…
The moment Brexit was achieved, Johnson and Hannan airily informed Britons that immigration would continue after all. No wonder, because the public schoolboys don’t care about immigration. Whether Poles and Bangladeshis live in unfashionable English provincial towns is a matter of supreme indifference to them.
The public schoolboys turned out to have no plan for executing Brexit. I’m guessing they considered this a boring governance issue best left to swotty civil servants. Johnson actually spent the Sunday after Brexit playing cricket. In the great public-school tradition, he was a dilettante “winging it”.
Now Britain seems headed for recession. When I mentioned this in an email to a privately educated Oxford friend, he chastised me: “You seem unduly concerned about short-term financial impacts. This is a victory for democracy.” I see what he means. If you make £200,000 a year, a recession is just an irritation. But if you make £20,000, it’s a personal crisis, and if you now make £15,000, then soon you may be struggling to feed your children.
Anyway, the public schoolboys have already moved on, first backstabbing each other and now extracting favours from their preferred candidates in the Tory leadership election. “May I count on your vote?” What fun!
Brexit: a coup by one set of public schoolboys against another — FT.com

As the philosopher Peter Singer says:

Peter Singer is Professor of Bioethics at Princeton University and Laureate Professor at the University of Melbourne. His books include Animal Liberation, Practical Ethics, The Ethics of What We Eat (with Jim Mason), Rethinking Life and Death, The Point of View of the Universe, co-authored with Kata… READ MORE

Consulting the public is a good thing to do. Perhaps it should be done more often (and it would not require as expensive a procedure as the British referendum). Accepting as binding the verdict of a relatively narrow majority of voters (most of whom were less informed than the average citizen about the question on which they were voting) is an entirely different matter.

We might be seeing the end of the 'archaic' British state:
My 350 on BREXIT: The break-up of Britain – finally | openDemocracy

Meanwhile, there might be stirings for a genuinely local democracy:

Return of the town hall: will Brexit bring British democracy closer to the people?

Professor of Human Geography, Queen Mary University of London
In the lead up to the EU referendum, the Leave campaign urged voters to “take back control from Brussels”. Their message invoked the dominance of EU laws and institutions – such as the European Commission and the European Court of Justice – over UK ones, to argue that the EU “undermined democratic governance”.


It remains to be seen when and how the UK will finally split from the EU, but we do know that the balance and distribution of power within the nation will radically change.
But amid all the fuss about Brexit, we risk rushing to redistribute powers, without having a proper debate about the outcomes of the limited devolution and localism that has already occurred.

When George Osborne’s devolution deals were in their early stages, it looked all too likely that power and money would move from one set of elites in Whitehall and Westminster, to another in cities such as Manchester and Sheffield. While regional politicians knew that they should be reaching out beyond “their own kind” to engage with the people, there was little clarity about how that could or would be done.
Indeed, council officers have long struggled to find the most effective way to engage with local citizens. For instance, my own research into Lambeth Council’s attempts to become a co-operative council found that it was extremely difficult to shift the power dynamics between local politicians and citizens.
While the vision was to find “new ways in which citizens can participate in the decisions that affect their lives” and to do things “with the community, rather than to the community”, council staff struggled to change the way that they worked. As one community development worker told me:

I think the officers have a view of the community which is not helpful … It doesn’t feel like an equal [relationship] … and it doesn’t feel like we’re respected for what we’re doing … [They] have got a huge amount of resource and we’ve got a tiny bit of resource and yet still we get things done … and then they even obstruct what we’re trying to do and take away from the little we’ve got.

Changing the culture of our public service organisations is likely to be a very long job. And while my research found that neighbourhood planning had a much better record when it comes to public engagement – by giving people genuine powers to shape local change – there is, as yet, little thought being given to the civic infrastructure that would be needed to build on this experience.
Most urban areas have very limited political representation, and localism cannot work without the local structures that facilitate representation, deliberation, negotiation and action. Neighbourhood planning requires local people to come up with a scheme to represent the diversity of local interests, and be able to take it to a vote. This has led to the creation of new urban forums, which are something like the age-old parishes, re-made for modern times.
The National Association of Local Councils (NALC) reports a sharp rise in the number of these local forums that have officially constituted themselves as urban community councils. For my book, I looked at the example of Queen’s Park Community Council in West London, which was established after a local referendum in May 2014.
The 12 councillors can use a small local mandate to organise events, send out a newsletter, lead on the neighbourhood plan and negotiate with public service organisations on behalf of local people. It is hard to imagine localism working without these new organisations. What’s more, they tend to be resolutely non-partisan, resisting the charms of political parties in order to focus on shared local needs and their own agenda for change.
In the negotiations over our national ambitions to leave the EU it is important not to neglect other layers of government across the country. When people are encouraged to take back control, they need access to the political institutions that might allow this to happen. Brexit could prompt a remaking of our political geography at a local level – as well as an international one.
Return of the town hall: will Brexit bring British democracy closer to the people?
.
.
.
Posted by Jeremy Woodward at 10:58