Visit the exhibtion at Kennaway House and vote for your favourite design for Port Royal:
Futures Forum: Plans for Port Royal and the Eastern Town >>> >>> architecture competition to re-imagine Port Royal >>> public invited to chose from a shortlist of five >>> >>> deadline Tuesday 12th July

The Herald has devoted four full pages to the project in its paper edition: 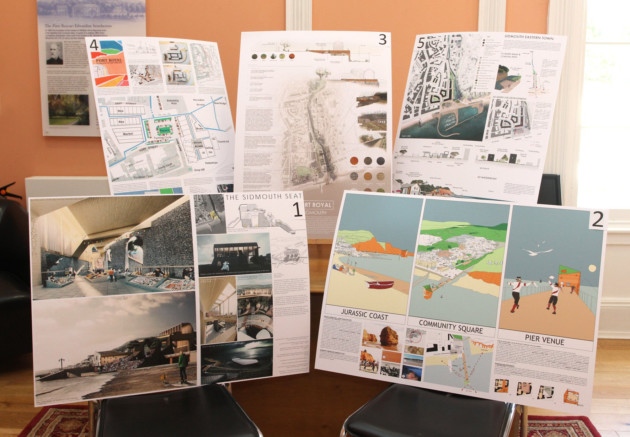 The exhibition of ideas complete with voting slips for the re development of Port Royal will be at Kennaway House until July 12. Ref shs 26-16SH 0552. Picture: Simon Horn.
A panel of judges has selected five designs in a competition to re-imagine Sidmouth’s ‘neglected’ eastern town.
Entries came from around the world from architects, members of other professions and residents that could, one day, be realised.
Industry leaders and acclaimed experts flew in to help town representatives draw up a shortlist – that will now go to a public vote.
Some of the 11 judges have shared their thoughts on the quality of the entries. 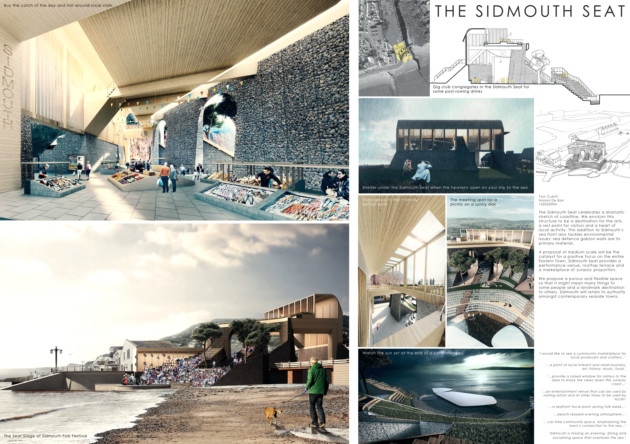 World Bank economist Christine Allison said: “I was hugely impressed by the standard and variety of entries that we have received as represented by the five shortlisted.
“They offer really exciting proposals for Sidmouth. If we could get either one of the elements or more than one of them actually built at some point in the future, I think it could put Sidmouth in the five top UK coastal towns.”
Professor Brian Golding, a Met Office scientist who lives in Sidmouth, added: “There was a great variety of responses to the brief, most addressing part of it rather than the whole. While there were a few that went into the detail of individual buildings, most took a more strategic view, dealing with the overall place of the Ham relative to the town, the river and the seafront.
“I was impressed by the wide variety of responses and I believe the selection that we made will provoke great interest amongst Sidmothians as to some of the exciting possibilities for this area.
“Each of them has ingredients that could form part of an eventual plan for renewal of the area – but I don’t believe any of them has the final word.”
Sidmouth Chamber of Commerce chairman Mel Gater said: “Who knows where this will lead, but at least someone has taken the time and trouble to create an interest for that area of Sidmouth, which, as we all know, is long overdue.”
Space constraints in the Herald have meant some of the finer details may be unclear. To see the five options in full, visit Kennaway House or sidmouthherald.co.uk
Voting closes on Tuesday, July 12, and the winner will be revealed the following day.

Your chance to vote on shortlisted designs that re-imagine Sidmouth’s eastern town - News - Sidmouth Herald
.
.
.
Posted by Jeremy Woodward at 01:30