Your takeaway coffee cup is not recyclable - really

Earlier this year, this blog looked at the 'paper' coffee cup:
Futures Forum: Your takeaway coffee cup is not recyclable

Hugh's War on Waste
The Battle Continues
Hugh's War on Waste Episode 3 of 3
Hugh has two new massive corporate targets in his sights. This time he's taking on Amazon, for all the packaging they produce, and the coffee shop giants Starbucks, Costa, and Caffe Nero, for a recyclingscandal that most of us never even knew existed.
In the UK we throw away a staggering 2.5 billion cardboard coffee cups every year. But our growing caffeine addiction brings with it a dark secret. Virtually none of these discarded cups end up being recycled. In fact, 99% of them are sent to landfill or incineration.


Hugh discovers that part of the reason for this is that most people assume that their coffee cups do get recycled and don't even know that there is a problem. But the opposite is true of for packaging. Everyone who has ever shopped online knows the frustrations of excess packaging. And when Hugh asked his online supporters who the worst offenders are, the answer is clear - Amazon.
BBC One - Hugh's War on Waste, Episode 3: The Battle Continues

The mainstream press is impressed:

By KATRINA TURRILL Thu, Jul 28, 2016
MANY of us have been led to believe the paper coffee cups we drink out of our recyclable, but waste warrior Hugh Fearnley-Whittingstall has returned to our screens once again in Hugh’s War on Waste to show us this isn’t the case.

As is the packaging industry:
Coffee cup controversy rages on after War on Waste show airs

He's been campaigning for some time:
Wake Up and Smell the Waste! | River Cottage

Here is a piece from the BBC Magazine: 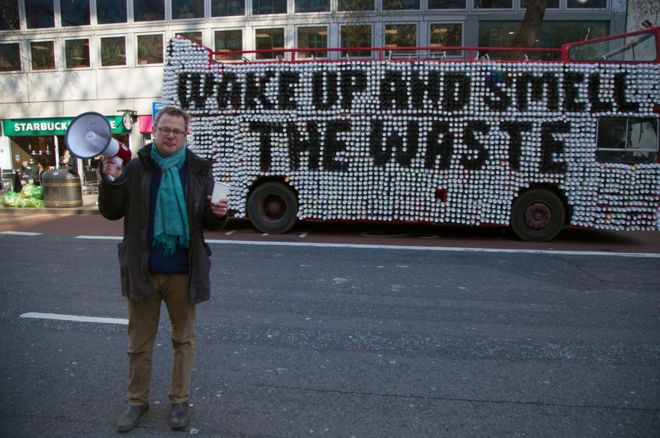 Every day hundreds of thousands of Britons put their coffee cup into a recycling bin. They're wrong - those cups aren't recyclable, and the UK throws away 2.5bn of them a year. It must stop, writes Hugh Fearnley-Whittingstall.

One chilly morning last March - exactly the sort of morning when a warming cafe latte could seem appealing - I took to the streets of London in a double-decker bus adorned with 10,000 empty takeaway coffee cups.

It might have looked like a piece of dodgy conceptual art, but it was actually designed to illustrate the vast volume of takeout cups we throw away daily in the UK.

My bus didn't represent all of them, though - 10,000 is the number of cups the UK gets through in just two minutes.

The British - like the Americans and Italians - are a nation of caffeine addicts. Walk down any busy street and you'll see people clutching coffee-filled cardboard vessels.

That adds up to a huge number of used cups - more than seven million a day, or 2.5 billion a year. The sorry truth is, next to none of them are recycled - and the even sorrier fact is that no-one's taking responsibility for that, least of all the big coffee retailers who have created this takeout trash mountain.

During my War on Waste battle, I've looked at all kinds of issues related to food waste, such as the heinous "cosmetic standards" applied to supermarket fruit and veg that lead to mountains of perfectly good produce being dumped.

And:
Futures Forum: The Story of Stuff: "You cannot run a linear system on a finite planet indefinitely"
.
.
.
Posted by Jeremy Woodward at 08:57