Brexit: and looking beyond revolt: "If we’ve learned one thing in the last week, it is that communities – not Westminster - must agree what works for them."

From every corner and across the spectrum, the referendum has been hailed as a 'revolt':
The world’s losers are revolting, and Brexit is only the beginning - The Washington Post
Brexit gives British establishment its bloodiest nose in decades
Brexit is just the beginning of a popular revolt against elites - MarketWatch
Brexit: Identity trumps economics in revolt against elites — FT.com

Revolt against the unaccountable
‘Brexit’ represents rejection of the international establishment
Monday, June 27, 2016
The Brexit vote is just the beginning of the revolt against unaccountable institutions and persons. The global political-economic class reacted with horror when a majority of British citizens said “enough is enough,” by voting to leave the EU.
Rather than government by citizens for the citizens, the world has increasingly become government by unaccountable bureaucrats for bureaucrats. The EU has morphed from a desirable free-trade and free-movement-of-capital organization into an entity that has stripped people of their sovereign rights while, at the same time, attempting to micromanage them in ways many have found to be intrusive and abusive.
Andrew Roberts, writing in the Daily Telegraph, captured the mood: “The role of bloody-minded insurgents willing to do the opposite of what they’re told by the authorities has been long central to great political events in British history . Almost every single agency of the international establishment was deployed to thwart them — the IMF, Bank of England, OECD, big business, Goldman Sachs the World Bank, Presidents Obama, Hollande and Abe, the EU Commission The Guardian, Davos, The Times, and so on — yet over 17.4 million people told them precisely what they could do with their expert opinion.”
Brexit a revolt against the unaccountable - Washington Times

But how are 'the elites' responding?
Brexit was a rejection of Britain's governing elite. Too bad the elites were right. | European Council on Foreign Relations
Revolt (and Revenge) of the Elites: More Globalist Sabotage of Brexit

And where do we go from here?

Here is the response from the New Economics Foundation - which tries to look forward as we learn the lessons of rejection:

Putting communities at the heart of a post-Brexit plan

The economy can only be truly strong when its benefits are felt everywhere. Following the Brexit vote last week, the UK’s economic shortcomings have become more apparent than ever.
The answer to these problems won’t be found in top-down plans, but through listening and learning to the many communities that have become disillusioned with politics and our economy - many of whom voted overwhelmingly for Brexit last week.
If there is any lesson to be drawn from the referendum campaign and its result, it is that the electoral map and voting patterns were strongly determined by socio-economic conditions. The data shows a deeply divided nation – both within and across generations as well as geographically. 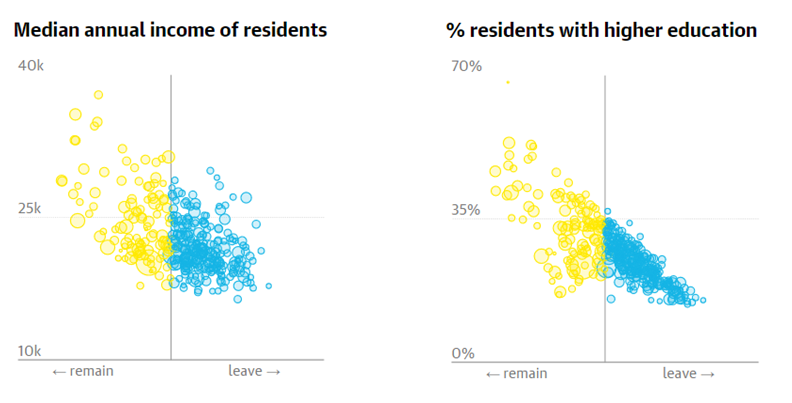 This should not surprise us: over the past decades, the UK has become ever more imbalanced socially and geographically, with whole regions abandoned by public policy as traditional industries and livelihoods were lost.
These are the regions that voted defiantly against the advice of both the UK and the EU establishments. Paradoxically, these are also the regions likely to be badly hit by the economic turmoil following the referendum’s results.
In the new context of economic turmoil and fragility, a plan to transform these marginalised economies becomes a necessity – to revitalise struggling communities, rebalance our economy and close the gaping rifts between Britain’s marginalised and well-off regions and communities.
The top five areas that voted for leave were all coastal communities. This is an expression of anger at a range of social and economic challenges following the decline of traditional sources of livelihoods – including fisheries, tourism and energy – and the struggle to replace them.
As a result of this, and their geographical location, these communities are also likely to suffer most from the consequences of climate change and wider environmental degradation.
Since last year, we have been making the case for a Blue New Deal to support, inspire and regenerate coastal communities around the UK. It was important before Brexit. It is essential now. And, if we’ve learned one thing in the last week, it is that communities – not Westminster - must agree what works for them.
So we’ve spent the last 9 months around the country, listening and learning. What should the UK, Scottish and Welsh governments do? What powers do local authorities need? What is the role of communities themselves? And who needs to help?
We will reveal what we’ve found in the autumn. But, already, five key themes are obvious:
Our economy is broken. It has consistently failed the people who need it most. It is time to pull our skills and resources together to collectively work on a plan that can deliver real transformation – to bring people from all walks of life closer together and to build a stronger and better economy.
This plan is not going to come from Westminster, Holyrood, Senedd or Stormont. It is going to come from the different voices and interests from around the country who will lay out what they want their policy makers and representatives to do. The usual offer of patchwork solutions will no longer suffice.
Help us spread the word: join the conversation about the future of our coasts.