There are concerns that the poorest part of the UK will lose its EU funding:
Cornwall to lose £863 per person after Brexit if EU cash not replaced | Plymouth Herald

And now the call for full independence is gaining momentum:

Now CORNWALL wants out! 'Historic Celtic nation' wants its own Parliament after Brexit

WITH Brexit threatening to tear Britain apart, even Cornwall is joining calls for independence from the UK.
By Michael Havis / Published 2nd July 2016 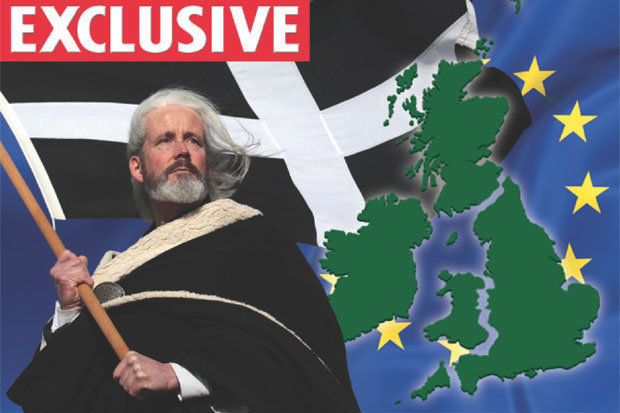 DYW GENES!: Cornish nationalists are calling for more independence after Brexit
Cornish nationalist party Mebyon Kernow says the county, which benefited from EU funding, was left an "economic wasteland" by Westminster.
Now its ramping up its calls for Cornwall to get a separate parliament, saying it's a necessary measure to protect the inheritance of its people.
It comes as Scotland faces a second independence referendum and politicians in Northern Ireland call for the province to be united with the Republic of Ireland. The EU referendum has also caused Plaid Cymru to bring forth plans for Welsh independence from the UK, despite Wales backing Brexit by a 6% majority. Even the enclave of Gibraltar faces an uncertain future, with Spain calling for joint sovereignty after the EU referendum result emerged.
Speaking to Daily Star Online, Mebyon Kernow spokesman Andrew Long admitted that Cornwall backed Brexit despite enjoying EU cash. But he said the only reason Cornish people voted Leave was to send a message to the government that they would no longer be staying quiet.
He said: "Cornwall is a historic Celtic nation, with its own language, distinct culture and Mebyon Kernow have for a long time had the view and policy that we need a federated UK with a devolved assembly for Cornwall to protect this inheritance.
"Cornwall was a net beneficiary of EU funding, mainly because of the economic wasteland that has been left by successive Westminster governments. They know little about Cornwall and seem to care even less. It was a surprise that Cornwall voted to leave. But, as with the long-ignored areas of the North East and North West of England, many people used the referendum as an opportunity to hit the government and the unaccountable sections of the EU and tell them that the forgotten sections of our community will stay quiet no longer.
"It is, though, unfortunate that they have chosen to turn their backs on the one institution that has cared about Cornwall and its people in favour of one that doesn't. Also, the hijacking of some of the Leave campaign by the racist extreme right is deplorable."
He continued: "Our role as a party now is to work with the people, and particularly with farmers, fishermen and businesses in the Duchy to ensure that the promises made to these sections by the Leave campaign are delivered. Cornwall needed the funding that the EU was going to provide due to being one of the six poorest regions of the Union, and without that it will fall upon Boris Johnson and Michael Gove to come good on this much needed money. They have promised it to us, now they must deliver. We also need control of the distribution of this funding so we can properly direct it to giving the injection of confidence in our economy.
"We will also work with the authorities to protect all people, no matter where they come from, who call Cornwall their home. There is no place for Racism of extremism here in Cornwall. Like Scotland and Wales we are proud of our culture, but accepting of others."
Cornish people enjoy minority status in the UK, granting them the same status as other Celtic communities like the Scots, Welsh and Irish. According to Cornish nationalists, England does not include Cornwall, which is a Duchy – not a county – and should be able to veto Westminster legislation.
The Liberal Democrats have argued in favour of granting Cornwall a separate Cornish Assembly, but they lost their Parliamentary seats in Cornwall to the Tories last year.
Cornwall in independence bid after Brexit slashes EU funding to nil | Daily Star

• Timothy Garton Ash thinks we may become the Former United Kingdom or FUK (If you think Britain is angry and divided, look at the continent, July 1). Given the likely departure of all the home nations and the growing demands for increased Cornish devolution, I suggest we’re going to be the Former United Kingdom Comprising England with the Duchy of Cornwall – or FUKCED.Charles HarrisLondon

Could 2016 be our own annus horribilis? | Brief letters | Politics | The Guardian

The Cornish could of course tell the Devon Saxons to 'go home':
Cornish identity: why Cornwall has always been a separate place | Politics | The Guardian

Because, Cornwall does indeed have a different identity, only grudgingly recognised by the Anglo-Saxon:

Brexit and stateless nations: why does Cornwall have Eurosceptics?

The fundamental difference between the eurosceptic movements and the nationalist movement  are twofold. Firstly the nationalist see the EU as reformable, the eurosceptics do not. The nationalists see leaving the EU as isolationist whereas the eurosceptics do not. The nationalist’s arguments in regard to continuing membership of the European Union are primarily economic, and predicated on existing patterns of behaviour shown by the central government in London. That is to state funding for health, education services and infrastructures is significantly lower in Cornwall than the UK average, and historically the government has shown little interest in putting money or subsidies into provincial areas far from London. In this regard the European Union has filled the gap caused by disinterested central government.

Brexit and stateless nations: why does Cornwall have Eurosceptics? - Nationalia
.
.
.
Posted by Jeremy Woodward at 08:45