... the final choice has been made by the public: 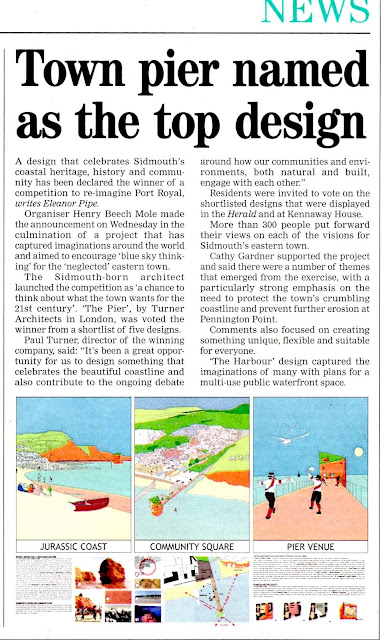 With the story just available on-line - together with a link to the winning design:

Click here to downloadRequires Adobe Acrobat or similar.
A design that celebrates Sidmouth’s coastal heritage, history and community has been declared the winner of a competition to re-imagine Port Royal, writes Eleanor Pipe.
Organiser Henry Beech Mole made the announcement on Wednesday in the culmination of a project that has captured imaginations around the world and aimed to encourage ‘blue sky thinking’ for the ‘neglected’ eastern town.
The Sidmouth-born architect launched the competition as ‘a chance to think about what the town wants for the 21st century’. ‘The Pier’, by Turner Architects in London, was voted the winner from a shortlist of five designs.
Paul Turner, director of the winning company, said: “It’s been a great opportunity for us to design something that celebrates the beautiful coastline and also contribute to the ongoing debate around how our communities and environments, both natural and built, engage with each other.”
Residents were invited to vote on the shortlisted designs that were displayed in the Herald and at Kennaway House.
More than 300 people put forward their views on each of the visions for Sidmouth’s eastern town.
Cathy Gardner supported the project and said there were a number of themes that emerged from the exercise, with a particularly strong emphasis on the need to protect the town’s crumbling coastline and prevent further erosion at Pennington Point.
Comments also focused on creating something unique, flexible and suitable for everyone.
‘The Harbour’ design captured the imaginations of many with plans for a multi-use public waterfront space.

This is the winning architects:
Turner Architects | Facebook
TURNER ARCHITECTS
.
.
Posted by Jeremy Woodward at 15:58