Since the vote on the 23rd, there have been concerns about house prices and housebuilders:

These concerns are gathering - whilst the leading housebuilder tries to talk things up a little. And notice how the company is actually speaking about the market before the Brexit vote: 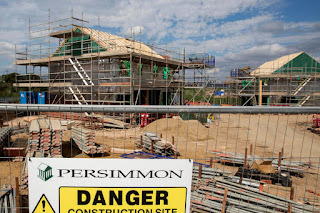 Persimmon has provided some cheer to Britain's battered property sector after revealing its sales of new homes rose by 6% in the fist six months of the year.
Brexit housing market: Persimmon sees 'good opportunities' for housebuilders | Business | London Evening Standard

The Mail is more forthright in today's paper:

Housebuilder Persimmon plays down Brexit slowdown fears as it posts a sales boost - but shares still fall 6% as sector suffers
By JANE DENTON FOR THISISMONEY 5 July 2016
Persimmon, Britain's biggest housebuilder by volume, sought to soothe fears over a Brexit slowdown today, claiming 'good opportunities' remain in the sector.
The blue chip group said it sold 6 per cent more homes in the first half of 2016 than at the same time a year earlier. Average prices for its homes rose by 6 per cent to around £205,500.
In tandem with a slide by the sector on worries over Brexit implications for the UK property market, Persimmon shares slumped by 38 per cent in the days after Britain's vote to leave the EU.
This morning, the group's shares were down another 6 per cent, or 86.5p to 1,348.5p despite the encoraging trading update.
Housebuilder Persimmon plays down Brexit slowdown fears posting sales boost | This is Money

Meanwhile, another East Devon developer is not so upbeat, as reported today:

With investors sending out warnings:
Should you buy St. Modwen Properties plc and Persimmon plc on post-Brexit updates? | The Motley Fool UK

Construction becomes first casualty of Brexit as housebuilders get jitters
Markit/Cips survey shows industry badly affected by EU referendum, with plots set to remain empty across UK for some time 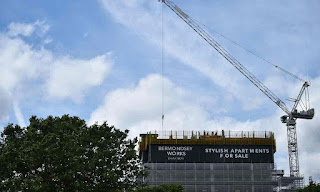 Phillip Inman Economics correspondent Monday 4 July 2016
Pity the poor brickmakers, soon their stockpiles will reach to the moon and back. That’s the message from private sector housebuilders, which have looked into the industry’s crystal ball and concluded that there is no reason to expand supply for the next six months.
The Markit/Cips survey of construction companies was disturbingly clear in the picture it presented of a sector badly damaged by the EU referendum.
Empty plots waiting for the digger to turn up and foundations to be laid look likely to stay that way, at least until the Brexit dust has settled, and maybe even longer, if the doom-mongers who predicted a big drop in house prices prove correct.
As the former head of the civil service Lord Turnbull said last week, the industry is extremely sensitive to economic sentiment and will not build a single house more than it believes can be sold.
Construction becomes first casualty of Brexit as housebuilders get jitters | Business | The Guardian


The East Devon Watch blog has noticed a couple of inconsistencies:

WHO PAYS? WHO BENEFITS? WHO CARES?
5 JULY 2016
Construction slows down, right down.
Local Plan targets are not met.
Government penalises councils by raising targets 20%.
Anyone spot the flaw?
And will developers cease buying up land for land-banking during this period?
Dream on, dream on.
Who pays? Who benefits? Who cares? | East Devon Watch

And other Devon media are showing concern - the question being: to what extent is the housing industry talking up the market?

How will Brexit affect Plymouth housing market - and your mortgage?
By WT_Herald | Posted: July 05, 2016 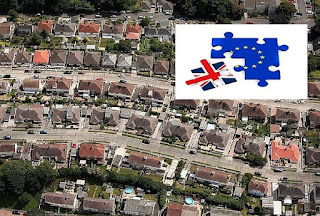 The UK's decision to leave the EU is unlikely to stall Plymouth's housing market – and mortgage rates could even come down, experts say.
Bosses at Plymouth's Lang Town & Country said they did not expect a "leave" vote in the June 23 referendum but the city's housing market does not appear to have been affected by the result.


How will Brexit affect Plymouth housing market - and your mortgage? | Plymouth Herald

This is hardly surprising, considering the overwhelming support for Bremain in the industry before the vote:

How could Brexit affect the UK's construction industry?
The UK’s European Union referendum is proving to be a hugely divisive topic with the population split between leaving and staying. A potential Brexit on June 23 could have far-reaching consequences throughout almost every aspect of life from house prices to immigration policies. But what would leaving the EU mean for the construction sector? Those working in the industry give Builder & Engineer magazine their views.
THE GENERAL OPINION
At the beginning of the year a survey by financial group, Smith & Williamson, revealed only 15 per cent of property and construction executives in the UK favoured an exit from the EU.
This seemingly demonstrates support for the remain campaign from the construction industry, suggesting the business interests of those included in the survey has influenced their decision, explains Paul Manchester, director of construction site suppliers Manchester Safety Services
The survey suggested confidence in the industry is at an all-time high, and executives are keen that the careful balance of growth and prosperity is maintained.
"A radical decision, such as leaving the EU, could upset this balance and inhibit the growth and confidence within the industry," says Manchester. "Uncertainty surrounding the global economy, taxation and access to funding could remove a layer of security from the UK’s construction industry. This potentially could lead to an increase in conservatism practiced by construction executives, unwilling to take risks in an unknown financial landscape."
How could Brexit affect the UK's construction industry? | Builder & Engineer
.
.
.
Posted by Jeremy Woodward at 14:55