A Gloucestershire Treehouse on Grand Designs

This evening's Grand Designs saw a beautifully innovative way to live right in the middle of nature - without damaging it:

Jon and Noreen take on an epic self-build, creating a modern treehouse on a half-acre site in the heart of a Gloucestershire town

With a report from Gloucestershire:

The story behind a 'treehouse' near Stroud, will feature on Kevin McCloud's Grand Designs this week. Chalford based architects Millar + Howard Workshop designed the home which will be showcased on the Channel 4 series on Wednesday.
The home is built on a small plot in Dursley surrounded by trees and has been dubbed the Tree House due to the architect's clever, innovative design which elevates the building into the surrounding trees. 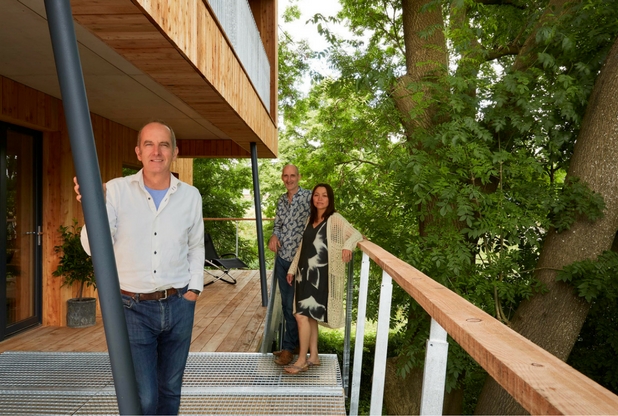 Architect Tomas Millar, said: “We loved this site and instantly wanted to include the trees which surrounded the plot. Rather than shy away from these natural obstacles we embraced their beauty. We honoured and celebrated what the site provided, we took inspiration from their form for the concept of the building design."
The site had previously failed twice to gain planning permission for more conventional houses and current owners, Jon Martin and Noreen Jaafar sought help from Millar + Howard Workshop to gain planning permission.
Jon Martin said; “We loved this specific plot because it was centrally located yet surrounded by trees not buildings. Millar + Howard Workshop's design has helped us realise our ambition of living here. We felt strongly about improving and preserving our local town, a community I've lived in all my life and who doesn't dream of living in a tree house?" 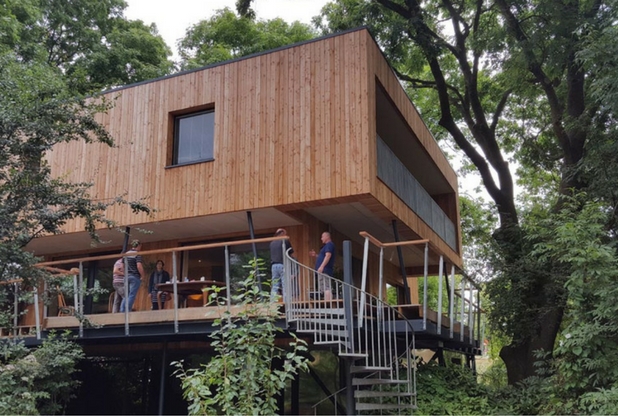 It's been a long time coming for Jon who walked past this site as a child and has longed to live there ever since. Previous schemes were refused planning but it was Millar + Howard Workshop's innovative design plan which finally won planners over.
Tomas said; “The planners were really supportive of our scheme and this project is a great example of working collaboratively with a forward-thinking planning office allowing for creativity. The planners were positive and engaging which helps make architecture to be more accessible."
The architects were able to fully embrace Jon's desire to create a certified passive house building having previously designed houses according to Passive House criteria. 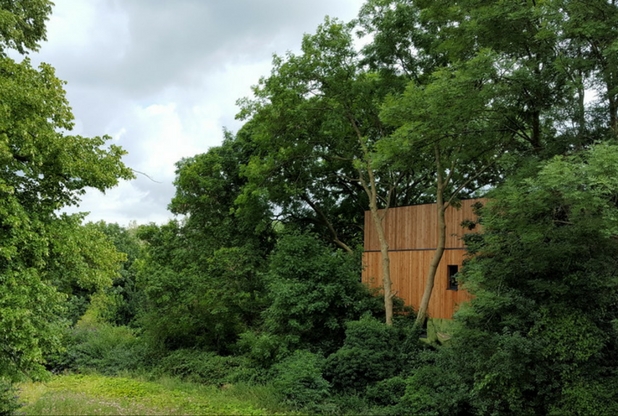 Tomas Millar said: “The listed trees on this site meant that the steel supports required to reinforce the structure caused a few problems. We love conundrums so we got out our sketch books and started inventing. Soon we'd resolved the problem on paper and before too long in reality too.
“It was a great design which the clients then project managed and constructed themselves and now they can sit on a balcony in the treetops with birds on the window sill and badgers and rabbits running underneath looking up at the woods and hills and know their house is heated by them and their cats."
The episode of Grand Designs featuring Millar + Howard Workshop's Dursley Tree House will be on Channel 4 on Wednesday 21 September 2016 at 9pm. 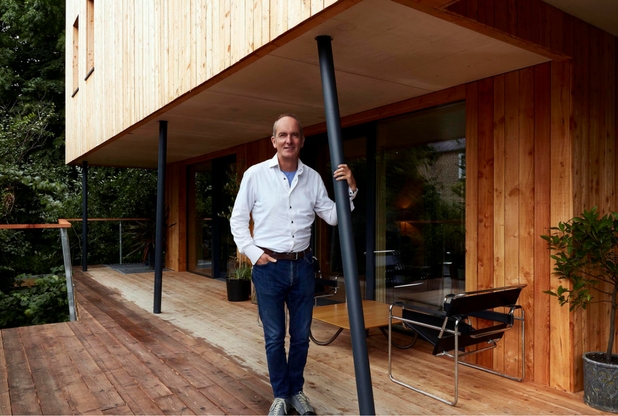