Climate change: government support for ‘dirty’ fuels across the world still exceeds that for renewables

... the FT published a revealing map this week:

A world map of subsidies for renewable energy and fossil fuels


JULY 26, 2016
by: Michael Kavanagh
The extent to which fossil fuels and renewable energy sources enjoy public support through subsidy has become a highly charged subject in continuing discussions about how to curb climate change.
Explore the FT’s map here 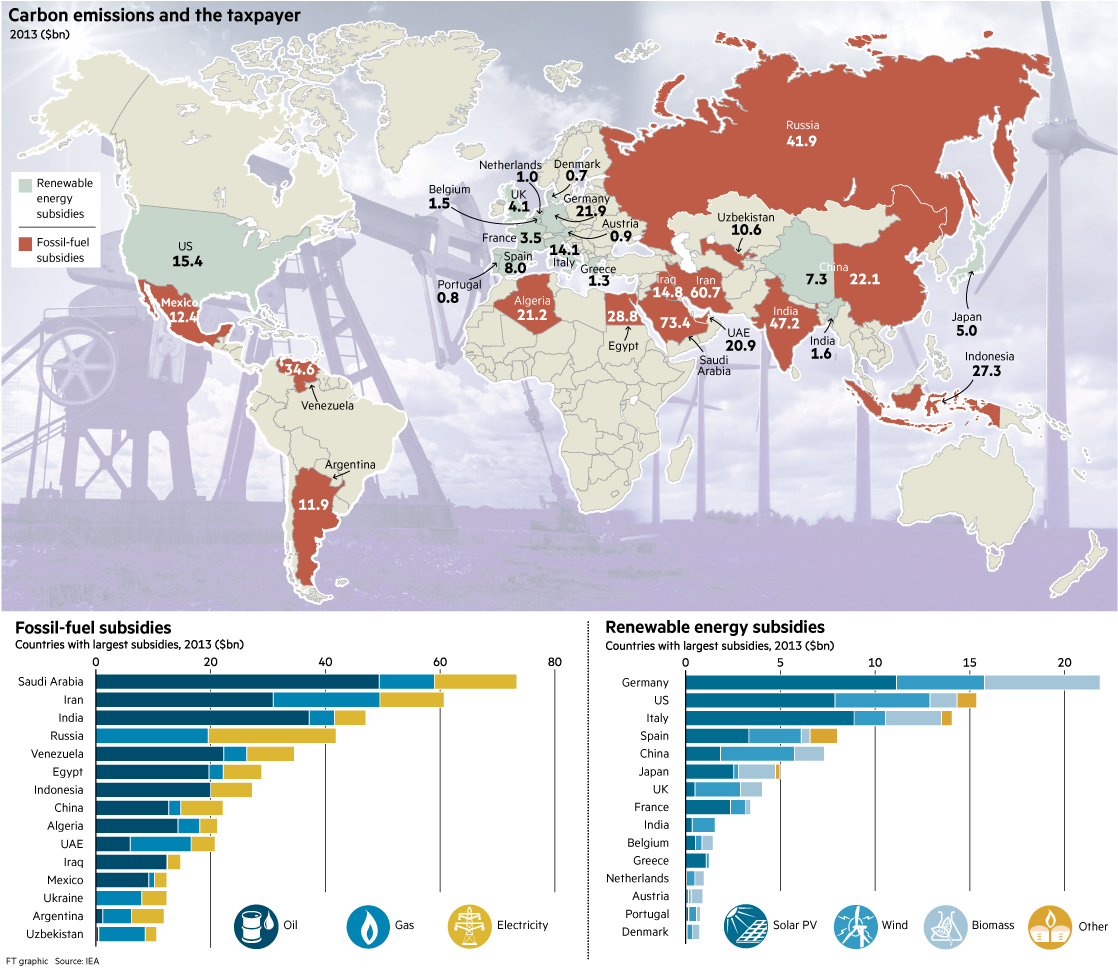 Statistical analysis by the International Energy Agency shows there are large transfers from the public purse that encourage the consumption of polluting fuels.
The IEA calculates that the global subsidy bill for fossil fuels stood at about $490bn in 2014, although reductions in the market price of oil, gas and coal since then will have lessened that total. Recent falls in fossil fuel prices could help governments attempting to reform or scrap this level of taxpayer support, the IEA argues.
Subsidies to aid the deployment of renewable energy technologies were $112bn in 2014, with another $23bn spent on supporting biofuels. So, while many developed countries are increasing financial backing for the expansion of green energy supplies, total subsidy support for “dirty” fuels across the world still exceeds that for renewables by a considerable margin.

Balance of power tilts from fossil fuel to renewables
Old certainties no longer hold sway as new plans for energy supply surprise
China stands out among leading countries by spending billions of dollars a year in subsidising the production and consumption of both fossil fuels and renewables.
Yet most countries can be divided into those that put taxpayers’ money into subsidies for carbon-intensive forms of energy and those favouring greener alternatives.
Although richer OECD countries are big producers of CO2 emissions, they also dominate the list of leading backers of green energy. It is non-OECD countries that lead the list of carbon subsidisers.
Data show that in some oil-producing states, large-scale subsidies of public consumption of fossil fuels represent between 15 per cent and 20 per cent of GDP. Iran, Libya, Venezuela and Turkmenistan fall into this band.

A world map of subsidies for renewable energy and fossil fuels — FT.com
.
.
.
Posted by Jeremy Woodward at 14:43

You might qualify for a new solar energy program.
Determine if you qualify now!