The public are also allowed to send in comments on the latest planning application - and they should be sent in by Friday 16th September:
16/0669/MOUT | Outline application accompanied by an Environmental Statement (with all matters reserved except access) for the development of up to 22,800sqm of floor space for use classes B1 (Office Light Industry), B2 (General Industry) and B8 (Storage and Distribution) with details of, and associated strategic landscaping for, the access, linking cycleway and footway, and flood improvements/attenuation. | Land Adjacent To Two Bridges Two Bridges Road Sidford

This is the latest from the Herald on the Town Council meeting: 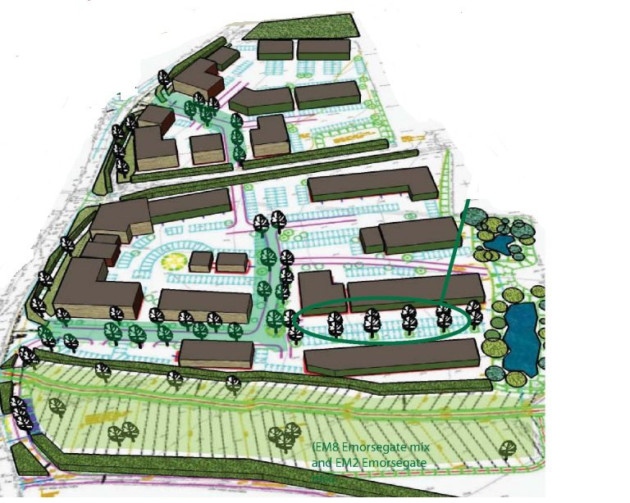 How the business park could be laid out
A raft of fresh objections have been lodged by residents and civic leaders against plans for a 9.3-acre business park – with warnings a single building could ‘dwarf everything’ in the Sid Valley. 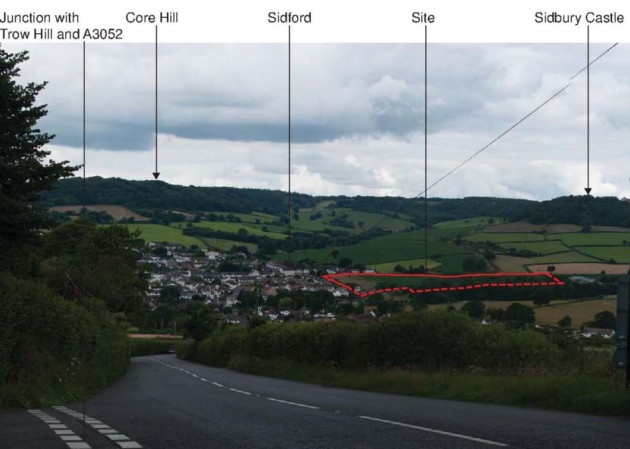 The proposed site viewed from Trow Hill
Town councillors were told they have to ‘fight the details’ as they debated Fords of Sidmouth’s amended plans for the site between Sidford and Sidbury.
Members will urge district chiefs to impose restrictions on the scale of the buildings and call for a cycle path linking Sidbury and Sidford to be built before any other construction work goes ahead.
Planning committee chairman Cllr Ian Barlow told Wednesday’s packed meeting in Sidford: “I’m not defeatist – I’m a realist. We’ve fought this for years and years and years but now it’s in the Local Plan. Now we need to fight the details. If we have to have it, we don’t want buildings more than seven metres high, and we don’t want any bigger than 500 squares metres – we don’t need a huge distribution centre.”
He urged objectors to get their partners and children to write in, too, and send letters to East Devon District Council (EDDC), Fords and landowner Sir John Cave. There are already 153 objections online.
The town council originally opposed the application due to the impact on roads, flooding and the Area of Outstanding Natural Beauty, and the lack of demand for the 300 jobs forecast to be created by the business park.
Fords’ amendments include relocating the proposed cycle path further from the A375, and redesigning the flood attenuation ponds to better fit in the environment. It also submitted ‘design codes’ – revealing that buildings would have a maximum height of 15 metres, and no one building would cover more than a quarter of the 5.8-acre southern field or the 3.5-acre northern site.
Critics at Wednesday’s meeting said such a building would ‘dwarf everything’ in the Sid Valley.
Cllr Michael Earthey said: “I said before, it will be a carbuncle on the landscape. Now we know the scale of it.”
Resident Ian Scott, who worked as an architect for 30 years, suggested hope was not lost. He said: “The Department for Transport can overrule the fact it’s in the Local Plan.
“I don’t think we should give up and say it’s inevitable.”
Town clerk Christopher Holland said if councillors did not object to specific details at this stage, the developer was being handed a ‘blank sheet’.
“This is your chance to put some red lines down on what you wish to see and what you wish not to see,” he added.
Members agreed to write to EDDC saying, if the business park does go ahead, the following conditions should be imposed:
● The maximum ridge height of the properties should be seven metres and the eaves should be no higher than five metres. There should also be no flat roofs.
● The cycle track should be built before any development goes ahead.
● The bat habitat should not be disturbed; specifically an ‘ancient’ hedgerow in Laundry Lane.
● Light and noise pollution should be restricted.
● There should be no retail under any circumstances on the site.
● A new traffic management report should be drawn up, and a traffic assessment will be requested.
● No one building should be more than 500 square metres in area.
For advice on commenting on the application, contact the town council on 01395 512424.

This front-page report is from the latest View from Sidmouth:

SIDMOUTH Town Council have recommended refusal for Fords of Sidmouth’s application for the controversial employment land in Sidford.
The controversial application – which sets out plans for the development of up to 22,800sqm of employment land consisting of office space, general industry space and room for storage and distribution – went in front of the town council’s planning committee to hear what members had to say.
Sidmouth Town Council Planning Committee were unable to support the application and stated several reasons why.
In a meeting packed with concerned local residents, committee members agreed: “The proposed development did not comply with Strategy 26 of the Local Plan in that the applicant was proposing two highway access points.
“Was the application to be granted, members were of the view that only one access point at the southern part of the site should be allowed.”
Members also stated that the proposed development would exacerbate flooding in an already regularly flooded area.
The list of reasons continued with members feeling the proposal would be detrimental to the amenity of residents with increasing traffic in the vicinity of the site and through the villages of Sidford and Sidbury, resulting in additional air pollution, congestion and adversely impacting on the residents of surrounding properties.
As well as having a detrimental visual impact on the AONB surrounding Sidford, councillors felt it would also have an impact on the economic viability of Sidmouth’s town centre.
The proposed development would create a significant and detrimental visual impact in the countryside within the important Area of Outstanding Natural Beauty with an associated detrimental impact on the vital local tourism industry.
Another stumbling point on the application is the apparent space at the existing employment site at Alexandria Road.
Many residents and councillors have raised this issue asking for development at this site before any other is considered.
Members did say, however, that if the application was to be granted, the proposed cycleway and footway should be constructed prior to any development of the site.
Sidmouth Town Council has received 12 letters of objection to the proposal while the district council – who will decide on the matter – last week had received 149 letters of objection and two letters of support.
Sidmouth Town Council fails to back Fords plan - View News
.
.
.
Posted by Jeremy Woodward at 15:16