Farming is having its ups and downs:
Futures Forum: Brexit: and farming benefitting from a weaker pound >>> and looking after a £108bn industry

Many farmers voted to leave the EU, because “Farmers don’t like all the red tape in Europe.” Indeed, it was quite a debate in the run-up to the referendum:
Leave EU to free British farming of red tape subsidies, George Eustice says | UK | News | Daily Express
VIDEO : More red tape for farmers if Britain leaves Europe warns Environment Secretary Liz Truss | Exeter Express and Echo
Should the UK get out of Europe?.. - Community - Farmers Weekly
Why ripping up EU red tape may not help the British economy - Telegraph

Of course, one farmer's bit of red tape is another environmentalist's safeguard...

For example, some would blame the current bad state of nature on intensification of farming:
Futures Forum: State of Nature: "intensive management of agricultural land had by far the largest negative impact"

Although - back to Brexit - some would see opportunities for realignments:
Futures Forum: Brexit: and a "unique opportunity" to create policies which suit the UK's wildlife and habitats

When it comes to hedgerows, farmers would like to cut them early, at the same time as harvesting:
Hedgecutting ban: Farm contractors demand rule change - Farmers Weekly
Hedge-cutting: Know the rules - NFU-online

Whereas the birding community would like this to be done later:
Birdwatchers clash with farmers over hedge-cutting months
Help the birds – resist the tyranny of the tidy hedge | Patrick Barkham | Opinion | The Guardian

And, naturally, it's the fault of the EU:
Defra Blame EU for August Hedgecutting Ban | The Farming Forum

This is the latest in the to-ing and fro-ing over when to cut hedges - now all in the context of Brexit:

Minister rules out hedgecutting review until after Brexit 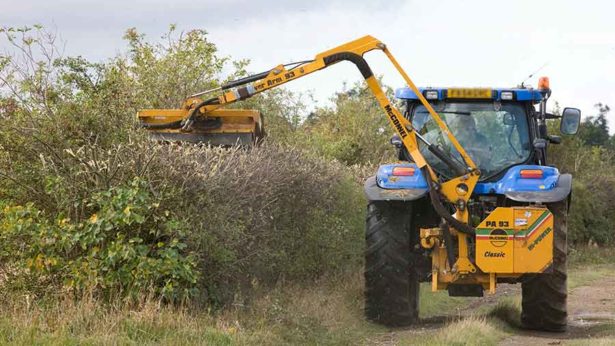 © Tim Scrivener
Farm minster George Eustice has ruled out any reversal of the hedgecutting ban in August, insisting there will be no changes at least until after Brexit.
The extension of the hedgecutting ban by one month has been deeply unpopular with farm contractors.
Typically, contractors would follow combines round in August and trim hedges immediately after harvest.
See also: Hedgecutting ban – Leadsom asked to change dates
But the August ban was introduced in England last year as part of EU regulations “to protect nesting birds on farms”.
Northamptonshire farm contractor Bob Rutt said the ban cost him up to £8,000 in lost income this summer, as he was forced to sit it out in August.
The hedgecutting season reopened on 1 September for six months, but Mr Rutt said some farmers and landowners were turning to two- or three-year cutting cycles and turning down offers of work.
“They don’t seem to realise that it is not actually the farmers this ban is affecting, but the contractors who work for the farmers,” said Mr Rutt. “I think I ought to send a bill for loss of earnings to Defra.”

‘No changes to ban’

However, in a letter seen by Farmers Weekly, Mr Eustice has insisted there will be no changes to the policy “in the immediate future”.
Tom Pursglove, Conservative MP for Corby and East Northamptonshire, wrote to Mr Eustice in late July on behalf of his constituent Mr Rutt, requesting a Defra review of the ban.
In his reply sent on 15 September, Mr Eustice, who campaigned for the UK to leave the EU in the referendum, writes: “I understand the impact the hedgecutting dates has had on your constituent and sympathise with the problems he has encountered.
“There will be no immediate changes. Until we leave, the current EU arrangements for farming and our environment remain in place.”
Mr Eustice explains that during consultations on the new CAP, the NFU “argued strongly” that sowing oilseed rape and temporary grass were key farming activities that needed to continue in August.
“More than 2,000 claimants were able to take advantage of this opportunity in 2015 and derogations are available again this year,” he writes.

In a handwritten note at the end of the letter, Mr Eustice says there is evidence that trimming hedges in August has an “effect on yellowhammers and other wonderful species”.
In response, Mr Rutt told Farmers Weekly: “They are listening to the RSPB, which is criticising farming. It is not actually this country that is killing them [nesting birds] off.”
Mr Rutt said the August trimming ban “unfairly singles out farming” and does not take into account other factors, such as an increase in raptors, domestic cats and fewer food sources in Africa for migrating birds that travel to the UK.
He advises landowners who require cutting derogations for August 2017 to apply no later than January “to avoid disappointment”.
NFU vice-president Guy Smith said: “The NFU have always questioned the science as to whether there is a significant detrimental impact on nesting birds from August hedgetrimming. If there are any environmental gains, they do not seem proportionate to the extra cost and inconvenience the ban causes farmers.”


.
Minister rules out hedgecutting review until after Brexit - Farmers Weekly
.
.
Posted by Jeremy Woodward at 11:35