Meanwhile, in the international university league table, there are mixed messages, with the likes of Exeter falling as Asian institutions gain ground - but the UK is still number two to the US:
Oxford becomes first UK university to top global league — FT.com 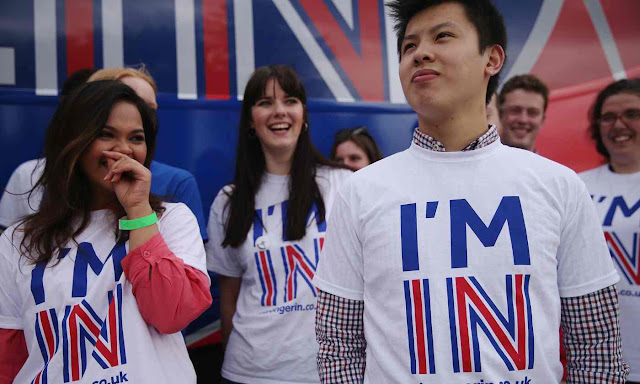 Students gather at the launch of the Brighter Future In campaign bus at Exeter University in April 2016. Photograph: Dan Kitwood/Getty Images


Afew months ago, I was asked to give a lecture on the usefulness of philosophy while in the UK. The lecture followed a wave of hostility towards philosophy from well-known physicists. Stephen Hawking famously wrote that philosophy was dead, because we now have science; a chapter in Nobel laureate Steven Weinberg’s latest book is titled “Against Philosophy”. While I was working on my lecture, I came across an astonishing unpublished text. It turns out that this issue had already been discussed at length by a young man who was, without doubt, better at it than I could ever be: Aristotle.
In the 4th century BC, the offspring of the best Athenian families often studied at Plato’s academy or Isocrates’ school. The rivalry between the two was fierce. It was not so much about quality, but rather about method. In the academy, education was based on the study of foundations: pupils were not learning how to be judges, sculpt statues or govern cities, but were asking questions about the meaning of justice, beauty or the ideal city. This was Plato’s idea about how to educate, and he had found a good name for it: philosophy. Isocrates considered this approach to be useless. He wrote: “Those who study philosophy may be able to do something, but always worse than those who directly learn practical activities. Those who do not care about philosophical issues, on the other hand, and are directly brought up in a practical activity, are always better. So for the arts, the sciences and politics, philosophy is useless.” Not so different to the arguments Hawking and Weinberg make today.

I do not like the impulses and motivations behind Brexit, because I see them spreading dangerously all over the world

Aristotle’s response came in the form of a dialogue called “Protrepticus”, in which he discussed why philosophy is, in fact, useful for practical endeavours. His first argument is that those who criticise the usefulness of philosophy for science are in fact thinking philosophically. When Hawking and Weinberg write that philosophy is useless to physics, they are not solving a physics problem: they are reflecting on which methodology and conceptual framework are best for science. They are philosophising. The very pragmatic “anti-philosophical” attitudes of Hawking and Weinberg can be easily traced back to the philosophers of science that influenced their generation of scientists: logical positivism, with its virulent anti-metaphysical rhetoric, then Karl Popper and Thomas Kuhn.
The second of Aristotle’s arguments is that the analysis of foundational philosophical concepts cannot but influence science. Newton would not have existed without Descartes; Einstein learned directly from Leibniz, Berkeley and Mach. Philosophical thinking encourages fresh perspectives, frees us from prejudice, reveals inconsistencies and logical leaps, suggests fresh methodological approaches, and opens the minds of scientists to new possibilities. The scientist is not a perfectly rational machine working on data and theories with a fixed conceptual baggage: she is a natural creature whose conceptual baggage changes as knowledge grows. Elaborating conceptual frameworks is what philosophers know how to do. This is especially true when it comes to methodology, which is anything but static: “philosophy offers guidance” on how research should be conducted, Aristotle wrote.
His third argument is that we need philosophy especially “when perplexities are greater”. It is when science goes through periods of great change and basic concepts are called into question that it most needs philosophy. The conversations we’re having today in my field, quantum gravity, question notions of space and time, which means that old and new arguments, from Aristotle to Kant, Hume to David Lewis, are again relevant. Philosophy is not useless for science – it is a vivid source of inspiration, ideas and critical thinking.
And so, armed with Aristotle, I arrived this summer in that anti-philosophical country, the UK, to present my poor physicist’s defence of philosophy to an amused audience. And here came the second surprise. I soon realised that people were worried about something much more urgent than the methodology of science: everyone was talking about the result of a certain referendum on Britain’s relationship with Europe. My British friends were dismayed. What had happened? How should we think about all of this? And, here again, Aristotle’s advice was perfect: “When perplexities are greater, turn to philosophy.”
As a European who likes the idea of a converging Europe, I would have much preferred that the British remain in the EU. But perhaps Brexit is not so bad for the European project in the long run, even if nobody will say it out loud: European integration has long been blocked precisely by the British, and going forward without the UK might be better. Nobody on the continent wanted the UK to leave, but if that is the result, maybe the European journey can go ahead, without holdups at every turn. The UK can stay in touch at the pace it feels comfortable with.
When it comes to science, Brexit does not seem to me to be a catastrophe: scientists have never cared about political borders anyway. Still, it seems clear to me that the UK had everything to lose and nothing to gain from leaving. So why leave? Why did a country that was meant to be quintessentially reasonable vote so clearly against its own interest? Sure, internal class issues and power struggles played a part, but wasn’t this supposed to be a practical place where people would not allow such things to prevail over concrete interests? Wasn’t this the nation that not long ago ruled the planet by outsmarting everyone else?

For this continental European, it seems as if the famed British practicality didn’t quite work out this time, and the challenge came precisely from thinking that issues are always practical, forgetting that what truly matters are the foundation, the philosophy. Well-worn stereotypes say that the Germans resort to Kant and the French to Voltaire, while the Brits weigh the pros and cons (and Italians, like myself, just sing a song). But beyond the pros and cons, there are motivations, impulses, values and ideals, and ultimately that is what drives history. I do not like the impulses and motivations behind Brexit, because I see them spreading dangerously all over the world, and I fear them: localism instead of convergence, identitarianism instead of universalism, short-sighted egotism instead of collaboration, and the calamitous idea of focusing on those considered to be similar while shunning “the other”. I fear the way that so many people hope to defend themselves from the malaise of life, from existential confusion, by choosing a group identity and sticking to it. I prefer Democritus: “To a wise man, the whole earth is open, because the true country of a virtuous soul is the entire universe.”
It seems to me that Brexit won because those who opposed it argued about practical consequences rather than addressing the very philosophy at its core. As in Aristotle’s first argument, those who claim that only practical issues count whereas values don’t are actually making a point about values, not about practical matters.
Beyond practical sciences like physics, in politics for example, there are always key foundational questions about our values and how we want to organise this complicated world. Neglecting philosophy, it seems to me, has been the mistake of those who campaigned for Britain to remain: the leave campaign won because it focused on identity, foundations and, yes, philosophy. And in the end, as always, philosophy matters.
• Carlo Rovelli is author of Seven Brief Lessons on Physics (Penguin). His new book Reality Is Not What It Seems: The Journey to Quantum Gravity will be published on 6 October by Allen Lane.

See also:
Futures Forum: Brexit: and the future for climate change >>> anti-intellectualism and inter-generational theft
.
.
.
Posted by Jeremy Woodward at 01:00