The Herald was there: 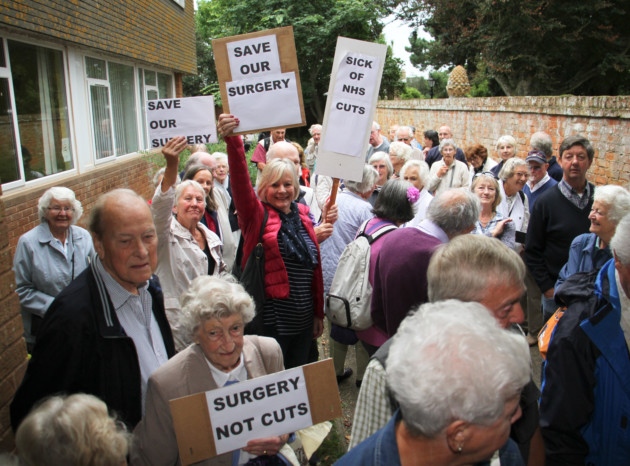 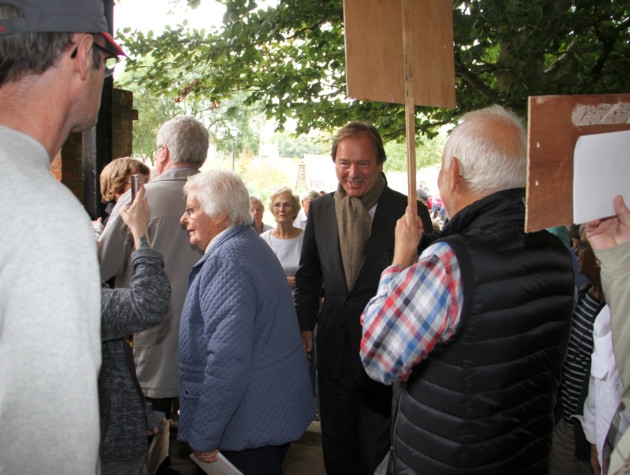 shs 38-16TI surgery protest 8099
Campaigners turned out in force to fight for Sidmouth’s Blackmore Health Centre after doctors appealed to the community for help to safeguard its future.
Scores of residents greeted East Devon MP Sir Hugo Swire at the entrance to the surgery yesterday morning (Monday) in a united show of support for the town centre site.
Sir Hugo was asked to attend a meeting with Sid Valley Practice partners, patient representatives and owner of the building NHS Property Services (NHSPS) after GPs said escalating costs and plans to redevelop the site - adding new flats and a pharmacy – left them fearing for its future.
A petition has been launched calling on the company to sell the property to the practice in order to ‘safeguard it for the community’.
Resident Heather Appleby suffers from multiple sclerosis and moved into the town centre to be close to the surgery.
She said: “At the moment my husband drives but if something happens to him I could be in a wheelchair and reliant on public transport. If you are really poorly you do not want to be waiting for a bus. I feel that there is such strong feeling in the town that if the opportunity came up, we could buy the surgery as a community.”
Town and district councillor John Dyson attended the demonstration and said: “One of the pledges of the independent councillors was to look after health care in the town. I think it’s terribly important; it’s probably the number one concern for people in the town.”
The practice partners personally shouldered a £2.1million loan to build the new Beacon Medical Centre, but remain committed to retaining a town centre site.
Gillian Dunkley said: “I work at the library and I know there are many people who can make it to the library and the GP surgery who could not possibly make it up to the Beacon.”
Tracey Pile, of Sid Park Road, added: “If I have to go up to the Beacon I have to pay £8 for a taxi and I cannot afford that. To catch a bus you have to wait around 45 minutes. I rely on a walking aid and cannot wait that long.”
Speaking after the meeting, chair of the Sid Valley Practice patient participation group Di Fuller told the Herald that many of the concerns and difficulties faced by the GPs were raised at the meeting.
She said: “The preferred solution is still to purchase the site but this is counter to the NHSPS remit which is to retain NHS property where it is still in use for medical purposes.
“This aim to safeguard property that might otherwise be lost as NHS estate is understandable as a national rule, but results in a risk to services when applied here, where the practice wish to buy it to reduce costs to the NHS. Ownership by the practice would ensure that services are maintained to meet local people’s needs.”
She added that the meeting had been positive and Sir Hugo was supportive of their objectives and recognised the need to maintain a town centre surgery.
Mrs Fuller thanked everyone for their support on behalf of the practice and patient group and urged the public to continue fighting the campaign by signing the petition and writing to NHSPS and Hugo Swire.
Sir Hugo said there was a mutual commitment expressed at the meeting to retaining a surgery in town.
He told the Herald: “At no stage has the surgery been threatened with closure. We discussed various measures going forward or what it could look like. Everybody is committed to there being a state-of-the-art provision of GP services there. Sidmouth is different in that we do have a high concentration of elderly people in the town and it’s not easy for them to get up to the Beacon.”
When asked if he supported the petition for the practice to purchase the Blackmore Drive premises, he said: “It is premature to know what it is the community would be buying.”
He added: “It’s important that people show their support for the practice.”