The planning application at Sidford has failed - but the District Council would still like the area to be developed:
Futures Forum: Sidford business park > Fords planning application >>> 16/0669/MOUT >>> REFUSED: but "the council remains committed to seeing the Sidford Two Bridges site developed for employment purposes – its allocation remains in place and is supported by the Local Plan"

The front page of today's Herald made that perfectly clear: 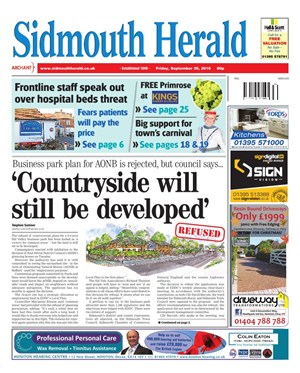 With the full article here:

Sidford business park refused - but ‘countryside will still be developed’ 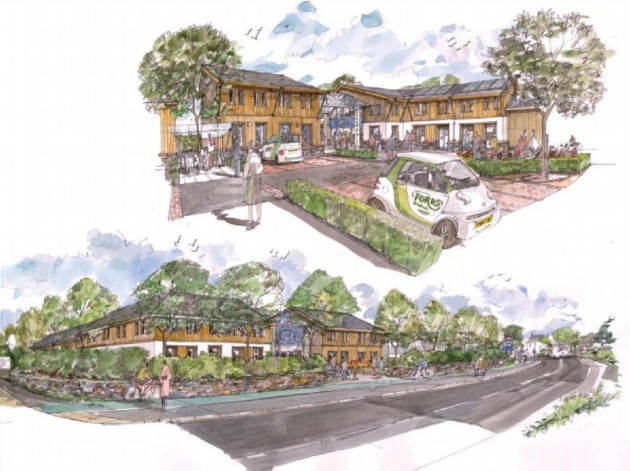 How Fords' business park could look

The refusal of controversial plans for a 9.3-acre Sid Valley business park has been hailed as ‘a victory for common sense’ – but the land is still set to be developed.
Campaigners reacted with jubilation to the decision of East Devon District Council’s (EDDC) planning bosses on Tuesday.
However, the authority has said it is ‘still committed’ to seeing the earmarked site - in the Area of Outstanding Natural Beauty (AONB) at Sidford - used for ‘employment purposes’.
Contentious proposals submitted by Fords and Sons were deemed unacceptable as the development would harm the AONB, depend on ‘unsuitable’ roads and impact on neighbours without adequate mitigation. The applicant has six months to appeal the decision.
The 12-acre site has a strategic allocation as employment land in EDDC’s Local Plan.
Councillor Marianne Rixson said ‘common sense’ had prevailed with the refusal of planning permission, adding: “It’s such a relief that we have had this result after such a long haul. I would like to thank everyone who helped me and supported me in this fight. The reasons for rejection again question why this site was put into the Local Plan in the first place.”
The Sid Vale Association’s Richard Thurlow said people will have to ‘wait and see’ if an appeal is lodged, adding: “Meanwhile, congratulations to all whose efforts have contributed to this decision for refusal. It shows what we can do if we all work together.”
A petition to ‘say no’ to the business park attracted more than 1,100 signatures and 384 objections were lodged with EDDC. There were two letters of support.
Sidmouth’s district and county representatives all objected, as did Sidmouth Town Council, Sidmouth Chamber of Commerce, Natural England and the county highways authority.
The decision to refuse the application was made at EDDC’s weekly planning chairman’s meeting. In accordance with the authority’s constitution, as both Cllr David Barratt, the ward member for Sidmouth Rural, and Sidmouth Town Council were opposed to the proposal - and the officer recommendation was also for refusal - the application did not need to be determined by the development management committee.
Cllr Barratt, who spoke at the meeting, was ‘very pleased’ with the decision, adding: “I based much of what I said on the research done by others into the application.”
He praised the work of planning officers.
An EDDC spokeswoman said the application had failed to demonstrate the high standards of design and landscaping required in the AONB, or prove that the traffic likely to be generated would not be harmful to highway safety. She said members were not satisfied that any noise impact would be acceptable, and they were concerned that the application did not show how a cycle route would be put in place, how the Sidford Cross junction could be improved, or how the site would be landscaped to reduce its impact on the surrounding area.
The spokeswoman added: “It is important to note that the council remains committed to seeing the Sidford Two Bridges site developed for employment purposes – its allocation remains in place and is supported by the Local Plan.
“All future applications for the site’s development must fulfil the requirements of the Local Plan and should include specific details that justify the extent and mix of proposed employment uses.”
Tim Ford declined to comment.