The future of the centre is unclear:
Futures Forum: The future of Sidmouth's surgery: NHS Property Services on a ‘commercial drive’ to squeeze profit from the site.

As is the future of the town's cottage hospital:
Futures Forum: The future of Sidmouth's hospital: "determined to ensure the community continues to have a say" 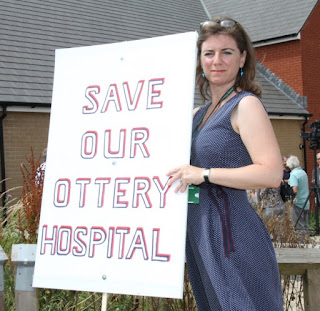 Plans to cut nearly 200 community hospital beds across Devon by 2020/21 will come under the scrutiny of county council health bosses on Monday (September 19).

Councillor Claire Wright (pictured) described the proposals in a leaked document as ‘devastating’ and said the underfunding of the NHS should not mean that patients suffer.

The leaked Sustainability and Transformation Plan (STP) for Wider Devon states: “The changes we are proposing will result in a reduction in the number of acute and community beds across our system of the order of 590 by 2021.

“NEW Devon Clinical Commissioning Group (CCG) are developing consultation proposals on the overall strategic direction of travel and provision changes, the components of new models of care and specific intentions to close a number of community hospital beds.”

NHS bosses were approached for comment, but would not specify how the cuts would affect different localities.

Cllr Wright said: “My understanding is that the document was submitted to NHS England for its consideration in June. That’s three months ago – why on earth it has been kept so secret from residents, and councillors including those like me on the health and wellbeing scrutiny committee?

“As an Ottery St Mary councillor, I am very worried indeed now for Ottery Hospital’s future – and the impact that so many acute and community bed closures in general will have on patient care all over the county. The fact that the NHS is massively underfunded should not mean that patients have to suffer.”

A statement issued by NEW Devon CCG says more analysis and consideration was to be undertaken before a further submission is made in October.

It said: “The STP creates the opportunity for health and local authorities to work together and formulate plans to improve and secure the sustainability of services we deliver to people across Devon. The programme of work to review acute and specialised service across Devon will commence in October.”

A report on the STP will be given to Devon County Council’s health and wellbeing scrutiny committee on Monday.

And from the latest Express & Echo:

By Exeter Express and Echo | Posted: September 18, 2016 By Anita Merritt 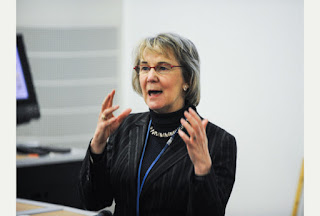 Angela Pedder, lead chief executive for the STP and Success Regime in Devon

Health service campaigners and activists in Devon will be holding their first combined protest tomorrow after obtaining a leaked document which is proposing cuts to health and care services across the county.

The Devon Sustainability & Transformation Plan (STP) says there will be "significant" changes in how services are delivered in the future.

Listed among its critical decisions is...

. Reducing the number of acute and community based beds across Devon by around 590 by 2021.

. Specific intentions to close a number of community hospital beds.

The five services outlined as prioties for action are mental health secure services; urgent and emergency care (A&E), cardiovascular (stroke and interventional cardiology); maternity and obstetrics, and paediatrics and neonatology.

Implementing the priorities is expected to create savings in the region of £85m next year, including business as usual efficiencies across providers and commissioners.

However, it will require a recuurent investent in integrated services of around £60m to deliver new models of care, and is expected to reduce "unnecessary" recurrent costs by £180m.

The report states financial balance would be achieved in 2018/19.

The case for change is that local health and social care services are under severe financial pressure, and health services alone are likely to be £572m in deficit in 2020/21 if nothing changes.

The leaked document states: "The challenges we face are significant and require a transformational mindset, courage and support from national bodies to ensure our health and care system is truly clinically and financially sustainable, and with the capability to deliver exemplary 21st century support to the people and communities of wider Devon.

"These ambitious plans will respond to the growing physical and metal health needs of people in their communities to ensure a future integrated network of support that is safe, sustainable and affordable and that enables people to live their lives well."

The draft Sustainability and Transformation Plan (STP) for wider Devon (Devon, Plymouth and Torbay) was submitted to NHS England on June 30. A further submission will be made in October.

NHS Northern, Eastern and Western (NEW) Devon Clinical Commissioning Group (CCG) is planning a public consultation this autumn, but says it does not yet have a date to release.

Angela Pedder, lead chief executive for the STP and Success Regime in Devon said: "The NHS and local authorities as a whole system are now working together to improve care through more integrated and locally tailored services and our plans will be formally communicated through the next version of the STP when it is published."

In the mean time the protest is being staged tomorrow from 11am at Newcourt House in Old Rydon Lane, Exeter, which houses NEW Devon CCG, and Devon's Success Regime and STP teams who are putting together the plan.

Protestors have been asked to wear red as protestors says the authors of the plan have repeatedly said "there are no red lines" in terms of cuts and changes.

Protestors will then move onto Exeter's County Hall from 1.30 to 2pm where Devon County Council's Health and Wellbeing Scrutiny Committee will be meeting to hear how the plan is progressing.

NHS campaigner Geoff Barr, from Exeter, said: "We need to oppose and stop the plans in place. The best parts should be incorporated in the NHS step by step and properly resourced. However, the impact of the report is likely to be highly destructive."

Protests start over proposed cuts to Devon's health and care services | Exeter Express and Echo
.
.
.
Posted by Jeremy Woodward at 14:42