How much solar could you get for the cost of Hinkley? 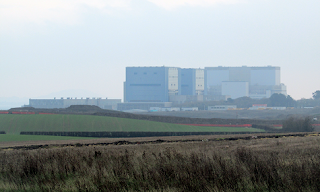 After a month of chin-stroking, the Government has after all decided to give the go-ahead for a new nuclear power station at Hinkley Point in Somerset.
Now Hinkley C’s backers, the French company EDF and China General Nuclear – both state owned – can start to spend the eyewatering £18 billion (excluding finance costs) it’ll probably cost to build it.
As we’ve pointed out before, that price tag makes Hinkley C the most expensive object ever built on Earth (to say nothing of the £30 billion of subsidy it’ll tie up until the year 2060, by which time Mrs May would be 104 years old).
Hinkley’s biggest problem has always been this albatross of a pricetag, particularly when you stop to think about what that much money could do somewhere else (otherwise known as the ‘opportunity cost’).
What else would £18 billion get you?
You could put a 4kW solar panel on at least 2.9 million households – enough to meet the power needs of the average 3 bedroom home. That’s at today’s prices, too – about £6,500 per installation. Hinkley won’t even start generating for ten years – how much will costs have dropped by then alone? Solar is  70% cheaper than it was a decade ago already,  and even conservative estimates expects it to keep on getting 10% cheaper every year.  All of which makes that 2.9 million a considerable underestimate.
That’s what you could get for the £18 billion construction cost. And Hinkley’s £30 billion subsidy would also go further if used for solar. The Solar Trade Association says you could get the same amount of power as Hinkley for half the total subsidy cost, because of the ludicrously privileged deal carved out to encourage EDF to go ahead with the plant in the first place.
Or what about using that money to save energy, not generate it?
OK, so Hinkley makes electricity, and most homes are heated by gas. But still, you could put solid wall insulation – effective, but costly – on about 1.8 million houses, assuming a cost for each home of about £10,000. That’d cut the nation’s fuel bills by as much as £800 million, every year* – a one off investment with a huge ongoing stimulus effect, to say nothing of its impact on fuel poverty.
The point isn’t that the backers of Hinkley should take their £18 billion and make our homes warm and energy self-sufficient. Project finance doesn’t work like that. But it does demonstrate the choices that we face with our energy system: huge centralised kit, or millions of power stations in everyone’s homes?
Everything that’s happening in battery innovation and renewable technology is leading us ever further towards the latter. Come 2060, what will our grandchildren think of how we chose to spend our money?
[* assumptions based on figures from Which?:  assumed average cost of a solid wall  insulation installation: £10,000;  average energy bill savings as a result £145-445 a year]

How much solar could you get for the cost of Hinkley? | New Economics Foundation 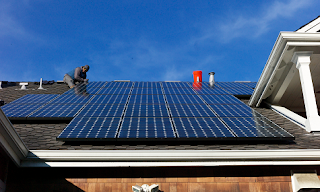 Last week Jeremy Corbyn pledged that under a future Labour government renewables would cover 65% of our electricity needs by 2030.
Is this achievable? There’s no reason why not.
Others in Europe are already close: renewables power more than 60% of Sweden’s electricity, and 52% of Portugal’s.
It’s true that some of Europe’s most renewable-friendly countries have hydroelectric resources unavailable in the UK, but not all. And besides, the UK’s geography gives us our own advantage: tidal energy, on the verge of taking off. 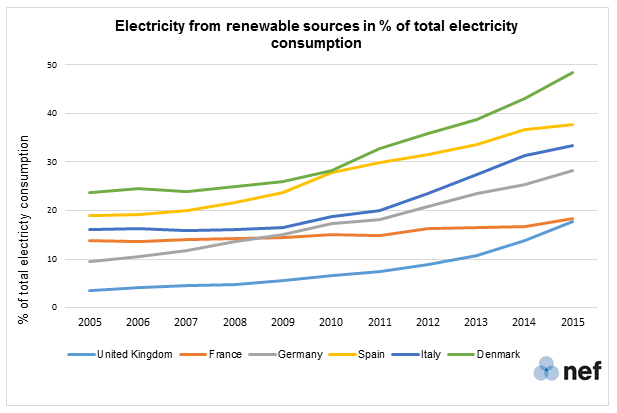 The only thing holding UK renewables back is policy commitment, or a lack of it.
Other countries have maintained generous subsidies for those renewables not yet as cheap as other energy sources. The UK Government has not – slashing feed-in-tariffs and cutting support for wind and solar energy.
Reinstating this support, and increasing investment in renewables, would likely see us hit these ambitious targets.
So 65% is achievable, but would it be too expensive? Would it harm the economy?
The UK’s economic competitiveness hasn’t been affected by climate policy so far and the industrial performance of Sweden or Germany show ambitious renewable targets don’t have to hinder industry.
Renewable energy is no longer substantially more expensive than fossil fuels, either. Onshore wind and solar power are already competing head-to-head with gas and coal.
The cost of renewable energy is declining so rapidly that a situation where offshore wind and other renewable technologies compete with gas and nuclear by 2020 is realistic, particularly when factoring in the costs of carbon emissions. The Department of Energy and Climate Change had already suggested this before it was scrapped.
This and technological innovations mean renewable subsidies wouldn’t be needed forever. In contrast, both fossil fuels and nuclear are still receiving extremely generous subsidies.
Let’s use this taxpayers’ money that’s supporting dirty and failing sources to replace them with clean and popular renewables.
Maybe then we’d hit these ambitious targets.

See also:
Futures Forum: Question: What is the most expensive object on Earth? Answer: At $26bn plus some rather 'opaque financing arrangements', it could well be Hinkley C
Futures Forum: "Cancelling Hinkley C would save Britain at least £30–£40 billion in energy bills - with renewables switch."
.
.
.
Posted by Jeremy Woodward at 11:34

There's a chance you are qualified for a new government solar rebate program.
Discover if you qualify now!