The future of Sidmouth's Blackmore Health Centre >>> >>> campaign launched: "The practice wishes to buy the surgery to reduce costs to the NHS."

The Herald has followed the story closely:

Update: Doctors thank Sid Valley community for support in bid to save surgery 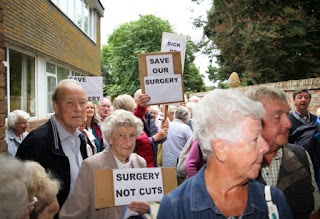 Doctors have thanked people for the huge outpouring of public support as the Sid Valley community turned out to fight for Blackmore Health Centre.
Scores of campaigners staged a protest at the entrance to the surgery on Monday after GPs revealed fears for its future in the wake of spiralling costs, a proposed rent hike of more than £22,000 and plans by landlord NHS Property Services (NHSPS) to redevelop the site. Proposals would see a new surgery provided, but flats and a pharmacy also added.
Sid Valley Practice partners and patient representatives appealed to East Devon MP Sir Hugo Swire to help their cause and - following a meeting with all relevant parties on Monday - they say there is hope.
Residents have strongly supported the GPs’ bid to buy the town centre premises - a move they say will safeguard its future, but NHSPS argues it has a remit to maintain buildings still needed for NHS services.
Speaking after the meeting, practice partner Dr Joe Stych said: “We had a really good response from our patients that we are really grateful for. Hugo Swire was really helpful. It was a really positive meeting and the outcome is that NHSPS has been tasked and agreed to come up with a plan for moving forward.
“At this time, the practice and patients’ group are hopeful that we will get a plan that works for us.
“NHSPS were apologetic about the difficulties we have had. We still want to buy the premises. Whether they will allow us to do that, I do not know. No actual agreements were made, but the right noises were made. Let’s hope they come back with an actual plan.”
Chairman of the Sid Valley Practice patient participation group Di Fuller told the Herald that, while the NHSPS remit to retain NHS property is understandable as a national rule, it results in a risk to services when applied in this case. She added: “The practice wishes to buy the surgery to reduce costs to the NHS. Ownership by the practice would ensure that services are maintained to meet local people’s needs.” 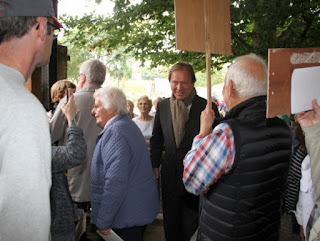 Sir Hugo said a mutual commitment to retaining a surgery in the town was expressed at the meeting. He added: “At no stage has the surgery been threatened with closure. Everybody is committed to there being a state-of-the-art provision of GP services here. Sidmouth is different in that we do have a high concentration of elderly people in the town and it’s not easy for them to get up to The Beacon [at Stowford Rise].”
When asked if he supported the petition for the practice to purchase the Blackmore Drive premises, he said: “It is premature to know what it is the community would be buying. It’s important that people show their support for the practice.”
A spokesman for NHSPS said: “We were able to reassure all parties that there are a number of positive options for this surgery and we are continuing to work on these to deliver a first-class facility that is fit for modern healthcare and will benefit the GPs and local patients. NHSPS is not-for-profit and only sells assets when the organisations that commission local healthcare - NHS England and clinical commissioning groups - tell us they are no longer needed by the NHS, and that is clearly not the case here. Surgeries are reimbursed for the costs of their rent, rates, water charges and clinical waste by NHS England.”
Mrs Fuller thanked everyone for their support and urged the public to continue fighting the campaign.