The local writer and designer who was shortlisted for the Port Royal competition has published a book of his ideas and project proposals:
Futures Forum: Port Royal: Envisioning the Ham Sidmouth > book launch

14 JULY, 2016 BY MERLIN FULCHER
Turner Architects has won an open ideas competition for the Port Royal and the Eastern Town area of Sidmouth in Devon 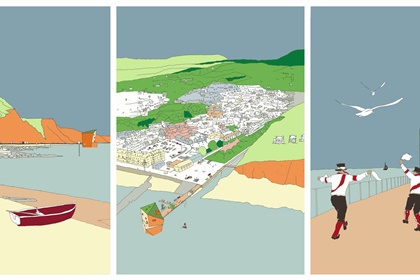 Studio director Paul Turner commented: ‘We are very excited to have won, this has been a great opportunity for us to design something that not only celebrates our beautiful coastline but also contributes to the ongoing debate around how our communities and environments, both natural and built, engage with each other.’

Open to architects, designers and students of related disciplines – the contest sought concepts to reinvent the coastal resort which is the gateway to the Jurassic Coast World Heritage Site.

Following the River Sid, the competition site has been the subject of several redevelopment visions over the years and is currently owned by a number of stakeholders including Devon County Council, East Devon District Council, South West Water.

Landmarks within the 8km² area include the disused Drill Hall community centre, the Swan Pub, Sidmouth lifeboat station and the Alma bridge which was damaged by floods four years ago.

The competition – which received 27 entries – was organised by local firm RBM Architects on behalf of the Eastern Town Partnership.

RBM director Henry Beech Mole argued the winning scheme could form the basis of a future bid to purchase land in the area from the local authority.

He said: ‘The winning entry could be a really special building, and I’m not sure I’ve seen anything like it before.

’It would be an incredible addition to the seafront in Sidmouth and we would like to congratulate Turner Architects on their winning entry.’