Campaigning for an Antarctic Ocean Sanctuary

The Arctic seems too far away to bother us - even though what's happening there has a direct impact on us here - although we can in fact do something about it:
Futures Forum: Climate change: what's it all about?

The Antarctic is even further away - but we buy products made from its natural resources and this is having a devastating effect on its ecosystem:
Krill oil: what is it, what are the health benefits and should you be using it? | BT

Matthew Taylor writes in the Guardian: 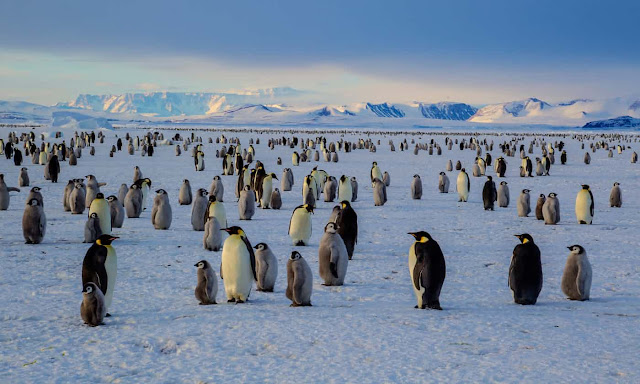 A global campaign is being launched to turn a huge tract of the seas around the Antarctic into the world’s biggest sanctuary, protecting wildlife and helping the fight against climate change. The huge 1.8m sq km reserve – five times the size of Germany – would ban all fishing in a vast area of the Weddell Sea and around the Antarctic Peninsula, safeguarding species including penguins, killer whales, leopard seals and blue whales.

The idea was originally put forward by the EU and is being backed by a new Greenpeace campaign to be launched on Monday. The proposal already has the support of several countries – including the UK – and will go before a conference of the Antarctic nations in October.

Will McCallum, of Greenpeace’s new Protect the Antarctic campaign, said: “The next few years are absolutely essential for the future of our oceans and we are in desperate need for governments to come together and do what is best for these amazing ecosystems.”

He said a decision in 2016 to create a smaller sanctuary around the Ross Sea in the Antarctic proved global cooperation to protect the oceans is possible. “Now we want to go one better and create the world’s largest protected area. We want to create that momentum that says this is not just possible, it is inevitable if we are to protect the wildlife that call the ocean home and crucially help mitigate the worst effects of climate change.”

The sanctuary would stop industrial-scale krill fishing in the area, which scientists say is decimating key food that many larger animals – from penguins to whales – rely on.

This week was World Penguin Day - and the i newspaper has been looking at the issues:

A recent Greenpeace report showed that the krill industry is increasingly fishing close to the feeding waters of penguins, whales and seals in the Antarctic (Photo: Getty)

You’d never steal food from a penguin would you? It would be like taking candy from a particularly fluffy, waddling, baby. But if you buy certain health supplements then you might be doing it without realising, and penguins on the other side of the planet in the Antarctic could be paying the price.

Penguins have lived in the Antarctic for 40 million years. Yet human activity is now changing their home at a faster pace than ever before. Today is World Penguin Day, so here’s how you can help ensure penguins flourish there for a long time to come.

While Antarctica’s land comprises barren expanses and formidable deserts, the Antarctic Ocean brims with life. Its seas are renowned for their treacherous conditions and forbidding ice, making them amongst the most difficult in the world for humans to access. But they’re also places where some of our most beloved wildlife are able to not only survive, but thrive.
Industrial fishing is killing penguin food

Now, however, the Antarctic Ocean is in increasingly urgent need of our protection. Climate change is already impacting penguins’ homes and food sources, and represents a mounting threat that we must do everything we can to limit. But now penguins are coming under another pressure. Industrial fishing vessels are travelling from across the world to the Antarctic, targeting tiny shrimp-like krill that penguins and most other Antarctic wildlife rely on for food.

The remains of a penguin are pictured in Petermann Island, Antarctica. Like seals and whales, penguins eat krill, an inch-long shrimp-like crustacean that forms the basis of the Southern Ocean food chain. But penguin-watchers say the krill are getting scarcer (Photo: Getty)

An Antarctic Ocean Sanctuary would put these waters off-limits to industrial activity, preserving the feeding grounds not just of penguins but also a myriad of other wildlife, from seals to great whales, and colossal squid to seabirds found nowhere else on the planet. A recent Greenpeace report showed that the krill industry is increasingly fishing close to the feeding waters of penguins, whales and seals – in the exact same waters that scientists, environmentalists and governments are seeking to protect.

The research shows that the krill industry is bent on expansion, fuelled by the lucrative sale of krill oil pills in pharmacies and supermarkets around the world – including on the UK high street. I find it shocking that household names are profiting from products that are putting the Antarctic at risk – especially when vegetarian and vegan Omega-3 alternatives like flaxseed and algal oil are already on sale.

An Antarctic skua eats the remains of a penguin in Petermann Island, Antarctica (Photo: Getty)

Since penguins don’t have a seat at the table when governments meet in October, it’s up to us to speak for them. One and a half million people worldwide have already signed a petition calling for the creation of an Antarctic Ocean Sanctuary, which would put the area off-limits to the krill industry and allow wildlife to recover. The more people who add their voices, the more likely it is that this precious region will be protected. You can add your name by signing the petition at protecttheantarctic.org.

All this support is having a real impact. Ministers around the world have started to publicly commit to protecting the Antarctic – and retailers with a direct line to krill companies are also starting to act in response to public pressure. After 45,000 people emailed Holland & Barrett, the company agreed to stop stocking krill oil products fished in sensitive Antarctic waters. Other high street retailers like Superdrug and Morrisons have followed suit, and now the pressure is on the last remaining UK stockists to be penguin-friendly, and stop sourcing products that put the Antarctic at risk.

On World Penguin Day, I hope they’ll do the right thing by the penguins and do just that.

Lily Cole: the krill oil industry does nothing to help penguins - inews
.
.
.
Posted by Jeremy Woodward at 02:00