But it goes even deeper than that - and the problem is how to deal with 'the data economy': 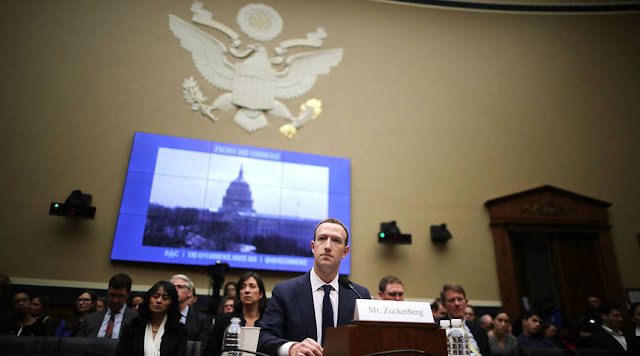 Facebook CEO Mark Zuckerberg testifies before the House Energy and Commerce Committee on April 11, 2018 in Washington, D.C. This is the second day of testimony before Congress by Zuckerberg, 33, after it was reported that 87 million Facebook users had their personal information harvested by Cambridge Analytica, a British political consulting firm linked to the Trump campaign. - Chip Somodevilla/Getty Images

In some ways policy is the easiest thing to discuss when we’re talking about the data economy. That's because, well, there really isn’t any. During the Clinton administration, "it was a very intentional act...to let the internet flourish with a minimum of regulation," says Nuala O'Connor of the Center for Democracy and Technology.

In May, the General Data Protection Regulation will go into effect, requiring companies to get explicit permission to use people’s personal information, require them to tell customers exactly what they’ve gathered (a big sticking point in this week’s Congressional hearings with Facebook CEO Mark Zuckerberg), and let them request that their data be deleted.

The GDPR affects any company, no matter where it’s based, that traffics in the data of anyone who lives in the EU. So it’s going to have global ramifications, and it has real teeth: the potential fines for violations are as high as 4 percent of the company’s entire revenue. One expert told me the GDPR is the reason that by late this year or early next, you could see the world’s first billion-dollar fine against a tech company.

So the future regulatory regime might not even originate in the United States, but it’s possible that we could all benefit. O’Connor said it’s probably time for a global standard for data and privacy, at this point.

“I haven't seen a member of Congress ask this question, although I would really love it if somebody would,” she says. “Which is, so tell me, you're going to give rights...to citizens of Luxembourg, when my constituents in Arkansas, or Alabama or wherever, is not entitled to that same kind of transparency and accountability?”

There are, she said, international systems already and “it's actually easier to build to one standard and give everybody the same set of rules and rights and privileges in their data.”

She says the U.S. could still benefit from a comprehensive set of privacy rules around the data economy, but worst case, much like the way California’s vehicle emissions requirements ended up forcing carmakers into an accidental global standard, the GDPR could just make it easier for companies to have better privacy rules for all.

With the perspective from the Harvard Business Review:

The U.S. Needs a New Paradigm for Data Governance 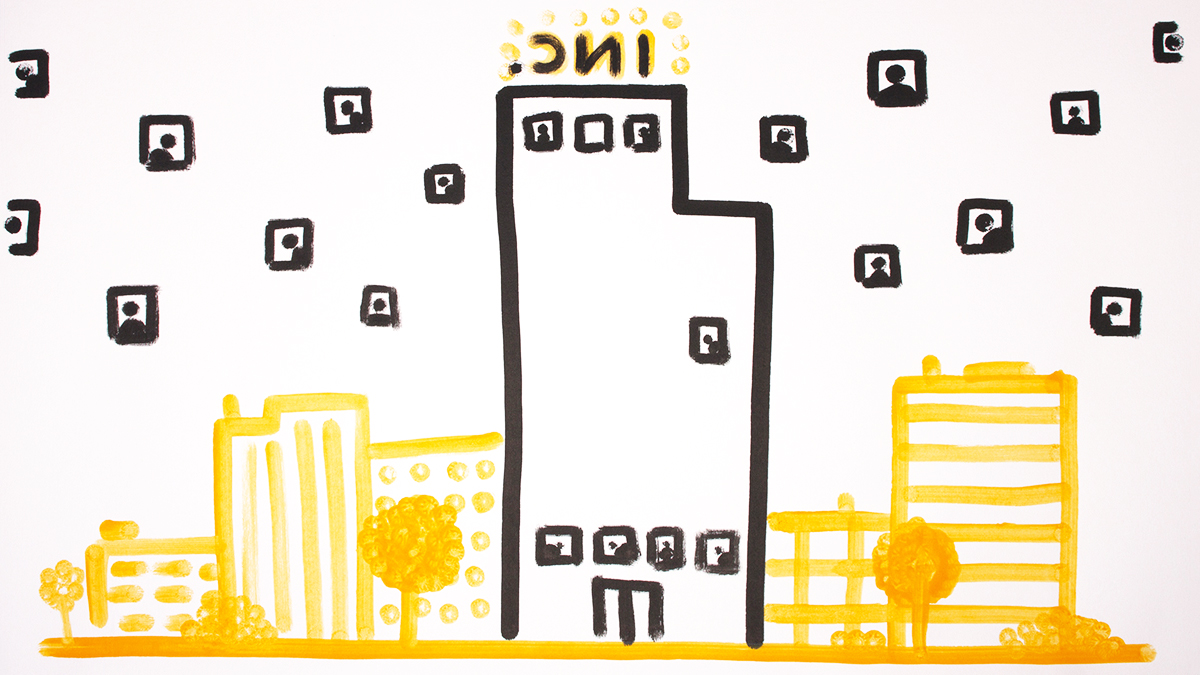 The U.S. Senate and House hearings last week on Facebook’s use of data and foreign interference in the U.S. election raised important challenges concerning data privacy, security, ethics, transparency, and responsibility. They also illuminated what could become a vast chasm between traditional privacy and security laws and regulations and rapidly evolving internet-related business models and activities. To help close this gap, technologists need to seriously reevaluate their relationship with government. Here are four ways to start...

Here's the perspective from the New Economics Foundation:

WHAT CONVERSATIONS ABOUT CAMBRIDGE ANALYTICA ARE MISSING

THERE IS A BOGEYMAN HERE – BUT IT ISN'T THE CONSULTING FIRM
4 APRIL, 2018 | ARTICLES
DUNCAN MCCANN

In recent weeks, Cambridge Analytica has become the new bogeyman-of-choice. One little data firm is supposedly responsible for all the democratic turmoil in Europe and the US, from Brexit to Trump.
The worrying work of the data industry has been the focus of intrepid journalists like Carole Cadwalladr and Peter Geoghegan for a number of years, but until recently this research was largely ignored. The recent whistleblowing has brought Cambridge Analytica and Facebook into the full glare of the media.
But very little in this story is new.
The use of data-collection and profiling was in fact pioneered by the Obama 2012 presidential campaign, with the explicit help of Google. They used data profiling to create a new style of political campaign focused on harvesting the resources of millions of individuals through social media.
Cambridge Analytica is not the real bogeyman. In fact, it’s more like the Wizard of Oz – all show and little effect. Ultimately what they are is a great marketing company – and the jury is still out on whether they are really able to influence people in the way that they claim.
If you’re looking for the real bogeymen, here are two good places to start.

Coverage of the Cambridge Analytica scandal has speculated about whether recent votes in the UK and the US were manipulated by targeted political content. More than demonstrating the dangers of mind-manipulation, the focus of this coverage shows the reluctance of some sections of the press to really engage with election results that they find uncomfortable.

The vote to leave the European Union in 2016 (and perhaps also the US 2017 presidential election) wasn’t caused by Facebook ads; it was driven by a deep dissatisfaction with politics, and a sense that people are living in an economic system which doesn’t work for them.

Now, this is not to say that Cambridge Analytica had no effect whatsoever on these elections – they were able to use data at the margins to influence some not to vote or to change their voting intentions. But without the structural problems to build on they would not have been successful.

2. THE DIGITAL PANOPTICON
That doesn’t mean we shouldn’t worry about data. But the big story of the last few weeks is about how the corporate world dominates people through the collection and misuse of their data. And that misses the other side of the story: the state.
Over the last few weeks the corporate data gathering world has been revealed – showing that Facebook not only records your likes and friends, but logs all the metadata about your text messages and calls.
But only a few years ago the media was saturated with news about the way our governments collect huge amounts of data about us. Revelations that British intelligence agencies conducted secret bulk collection of personal data demonstrate that it is not just private companies who have been guilty of misuse.
We are entering a mutually reinforcing digital panopticon where the state and corporate sector gather as much data about us as possible – with the state happy to leverage the data gathered by private companies, and the private companies happy to be allowed to do it. Those are the real bogeymen, not Alexander Nix and the rest of the Cambridge Analytica operation.

SO WHAT CAN WE DO ABOUT ALL THIS?

Dealing with organisations like Cambridge Analytica is relatively easy in theory. All digital activity around elections should be regulated in the same way that TV, radio or print media is – meaning that the information from a campaign which is untrue or defaming is a matter for the police. In the UK we also have very strict rules on TV advertising which could be applied to online content.

But part of the reason that we have found ourselves in this position is that it is not obvious what to do about the wider problem of data giants dominating us. Fines can be used as a signalling tool but it is debatable whether these have the transformative effect that we need for these huge and highly profitable data companies.

In the past, when companies get too big and powerful they have often been broken up. This has sometimes been successful but the nature of data companies and the platforms that they operate means that this will not necessarily work:

Firstly, one of the features that people find most useful about these large platforms is that they have everything and everybody on it. It would be hard to recreate this through many smaller platforms.

Secondly these platforms are subject to network effects – this means that as they get more people on their platforms they become much more useful. This is a world where popularity and success breed more popularity and success. Some speculate that breaking up the likes of Facebook or Google into many small companies would not result in a long-term competitive environment but would see one of the Googlets or mini-Facebooks becoming dominant, with the others subject to the inverse negative network effect as with the likes of MySpace and others.

This has led people to search for other options. If Facebook or Google are natural monopolies then this suggests another course of action: nationalisation, as suggested by the likes of Paul Mason or Nick Srnicek. There are challenges in how we might put this into practice. How do you nationalise a US-based company operating in every country in the world? How might a UK Facebook interact with other public and private Facebooks around the world? And do we trust the government to use our data any more responsibly than big corporations?

But the wider call for control over our digital economy is spot on. If we do not ensure that the platforms of the future are public or at least focus on more than the relentless pursuit of profit, then we risk letting the likes of Google, Facebook, Airbnb and Uber own and control the basic infrastructure of our 21st century society – and this is something that we cannot allow to happen.

NEF will be spending the next few months looking into various options for reforming the data economy, including the potential for platform cooperatives. Watch this space.

What conversations about Cambridge Analytica are missing | New Economics Foundation
.
.
.
Posted by Jeremy Woodward at 01:00

Hi , thanks for sharing your information.The insights are really helpful and informative. If you want to learn about POLITICS, this will be the rightplace for you.
best Political strategist in india
political science courses In india
Election management Company in India