"If Pennington Point goes another four or five metres, the River Sid will become the sea - and Sidmouth will be under water."

Sidmouth's cliffs are crumbling at an alarming rate:
Futures Forum: Dramatic show of how far the cliffs at Pennington Point have retreated over a 10-year period from 2006 to 2016 >>> "Sidmouth’s cliffs to the east of the seafront are constantly under attack from coastal erosion."

And there have been more such falls this last fortnight:
Futures Forum: Dramatic cliff falls on Eastern Beach > the red sandstone of Hanger Cliff: "our common assets"

It's clear that something needs to be done:
Futures Forum: Pennington Point cliff falls and the Beach Management Plan >>> campaigning for action to deal with coastal erosion at the rate of a metre a year


Sidmouth is mere metres away from disaster, says clifftop resident

Sidmouth is mere metres away from disaster if its coastline continues to crumble, a cliff-top resident and campaigner has warned. 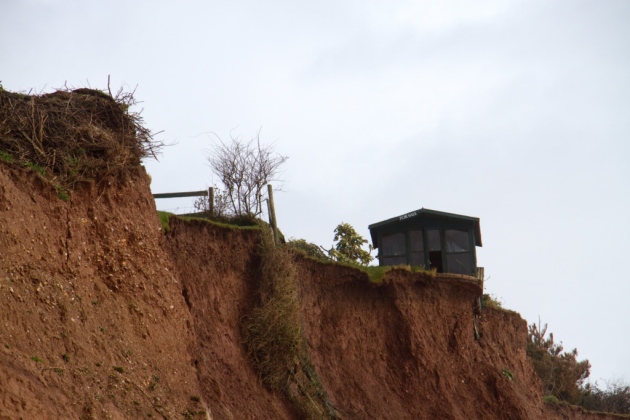 Shed for sale on top of Sidmouth cliffs. Ref shs 14 18TI 0920. Picture: Terry Ife
A spate of landslides have seen fears voiced that the town could end up ‘under water’ and left with a ‘£72million’ clean-up bill.
Hundreds of tonnes of dirt and soil have plummeted onto East Beach and into the River Sid in four separate cliffs falls which took place in just a few days.
The first, last Tuesday, March 27, has attracted attention from onlookers after it left a shed teetering on the edge of the cliffs.
The second landslide happened some time over Easter weekend, while the third and fourth happened on Tuesday this week – one at 1pm and the other around 5pm, according to witnesses. 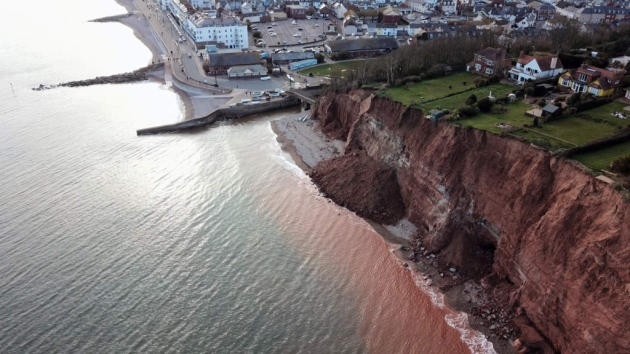 One of the latest cliff falls.
Resident Paul Griew, of the Cliff Road Action Group, said: “If Pennington Point goes another four or five metres, the River Sid will become the sea.
“If we then have a high tide and a south-easterly gale, water will rush over the river wall and flood across the Ham - and Sidmouth will be under water.
“It is estimated that such a flood will cause £72million of damage to people’s homes and businesses which won’t be able to run.
“Something needs to be done or Sidmouth is going to be flooded.” 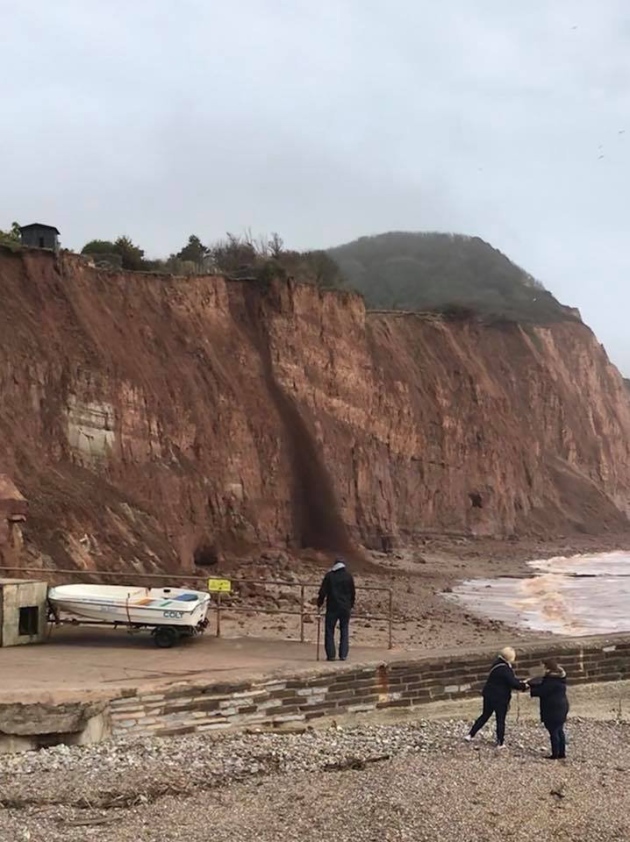 Cliff fall at Sidmouth East Beach on Tuesday, April 3. Picture: Anne Bishop
The Herald previously reported Mr Griew’s concerns in February last year after his £4,000 summer house, along with six metres of his garden, were lost in a cliff fall.
At the time, the Cliff Road resident estimated the rate of erosion as being a metre a year for the past decade. He said, if it continued, he could lose his house in 30 years’ time.
East Devon District Council is leading a project to create and fund a scheme to protect the seafront.
A spokeswoman for the authority said: “The council is currently progressing the outline business case for a Sidmouth and East Beach management scheme, which is primarily to reduce the risk of flooding to the town by reducing the rate of erosion to the cliffs to the east and maintaining a good standard of protection from the sea along Sidmouth seafront.
“You can see the progress being made at our public exhibition on Thursday, April 19, from 1pm to 7pm at Kennaway House, where you can also meet our consultants.”
MORE: See a video of recent cliff falls