Plans are moving forward for a replacement Alma Bridge:
Futures Forum: Latest plans for Alma Bridge to be considered by Town Council

Among many of the issues around the new bridge, there will also be the question of how it will impact on the environment and landscape - of an iconic piece of Sidmouth's heritage:
Rising Bray - AbeBooks
Futures Forum: Dramatic cliff falls on Eastern Beach - and at Hanger Cliff: "our common assets"

Considerable time and money has been put into the new project - so, whilst the base will be of flint, it nevertheless contrasts with the red sandstone cliffs along the River Sid - plus, the metal railings are not exactly the same as the original Alma Bridge of Victorian design:


Artist’s impression of the new £750,000 Alma Bridge in Sidmouth revealed

Artist's impressions of what the new Alma Bridge will look like when it is finished.

Sidmouth’s popular seafront recreation ground will be closed off for six months while the £750,000 new Alma Bridge is installed.

The news comes as Devon County Council (DCC) has given the Herald an exclusive sneak-peek of how the structure could look.
Work is set to begin on the site, just north of the existing crossing, in the autumn. The exact start date is not yet known, but it could well take place during the Sidmouth Science Festival week, between October 6 and 14.
The news was revealed by Sidmouth Town Council clerk Christopher Holland at a meeting on Monday. 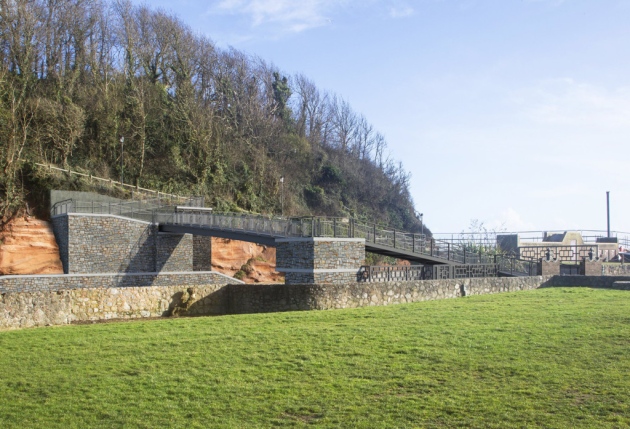 Artist�s impressions of what the new Alma Bridge will look like when it is finished.
Days later, DCC released artist’s impressions of the bridge and said that an application was due to be submitted to planners in the coming weeks.
The proposals include short sections of steep ramps to access the 19-metre main bridge span over the River Sid, which will be 37 metres upstream. DCC’s design team is currently working on the technical and aesthetic details.
Mr Holland said, during the building works, the Ham would be fenced-off and used as a working area where machines could be kept while staff accommodation would be at the back of the swimming pool.
All public footpaths will, however, remain open and the work will not affect the access to the seafront.
Mr Holland said that it was anticipated that the work would take six months, but it was dependent on the weather. He added the first big event to take place afterwards in 2019 would be Sea Fest, held in June, so contingency plans would be made in the event that the development took longer than expected.
“It is good news. We have been waiting for this for a long time. It will be a fantastic asset to the town although there will be a little bit of pain during the construction period,” said Mr Holland.
Residents will have the opportunity to see the computer-generated images and pre-planning drawings of Alma Bridge at a public exhibition being held by East Devon District Council on its beach management scheme at Kennaway House on Thursday, April 19, from 1pm to 7pm.
Councillor Stuart Hughes said: “A lot of thought and effort has gone into the design of this bridge to ensure it’s accessible to all users as well as being an attractive addition to this end of the town.
“The plans are looking impressive and these images give everyone an idea of how it will look. The technical details of the structure are now being finalised before an application is hopefully submitted in the coming weeks.”
Artist’s impression of the new £750,000 Alma Bridge in Sidmouth revealed | Latest Sidmouth and Ottery News - Sidmouth Herald
.
.
.
Posted by Jeremy Woodward at 14:37