The New Economics Foundation is saying the same when it comes to climate change:

WHY IT REALLY IS TIME TO MAKE THE POLLUTER PAY


DAVID POWELL
SUBJECT LEAD - ENVIRONMENT
Another week, another oil company telling us that we have no choice but to keep on using fossil fuels for years to come. Enough. They and their shareholders should spend a bit more time listening to the poor souls on the climate frontline. For whom climate change isn’t just a thing to which you have to pay lip service in an investment strategy, but a matter of life and death.
They should listen, as I did this week, to Vanuatan MP Ralph Regenvanu. Listen to the catch in his voice as he talks about the devastated crops, the permanent cycle of natural disaster and rebuilding, and the existential crisis facing his country and many others sea levels rise. Ralph wasn’t even supposed to be in London this week. He was in town for the Heads of Commonwealth meeting, which was moved from Vanuatu because of a devastating cyclone. 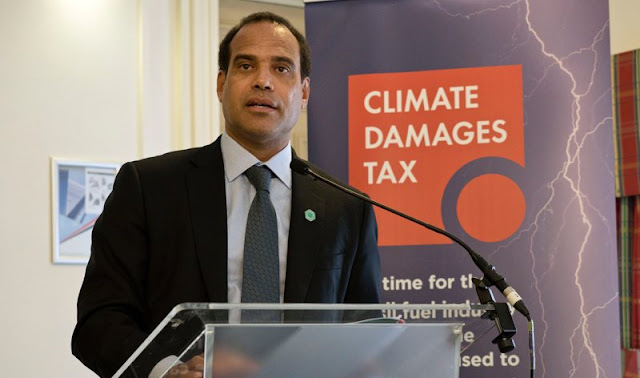 Vanuatan MP Ralph Regenvanu
Climate change has always been first and foremost a story of profound injustice. Vanuatu, for example, emits only 0.0016% of global carbon emissions. But it’s not hard to see who the winners are. In 2017, Exxon Mobil and Shell alone made $35 billion in profit. The lobbying of oil, coal and gas companies has kept the world propped up on a vast island of fossil fuel subsidies. It’s becoming ever clearer that the industry has known for decades – privately – that the very essence of their business activity was risking planetary climate breakdown.
Yet policy-makers have been far too timid in the face of big oil, and their large political donations. Very few initiatives of any clout have set about actively trying to keep stuff in the ground, focusing instead on trying to change consumer behaviour and/or get more renewable energy built. This partial approach is, on economic terms alone, a mistake. It also ducks the critical political question of fairness.
That may be about to change. Mr Regenvanu was speaking at the launch of a major new campaign for a Climate Damages Tax, levied on fossil fuel companies. The proceeds would be primarily used to pay for the ‘loss and damage’ caused globally by the carbon usage of principally rich countries.  On our current trajectory of warming, it will cost $428 billion per year by 2030 – and $1.67 trillion by 2050 – to pay for cleaning up after the ever-rising impacts of a climate system gone haywire. That’s a separate pot of cash entirely from that needed to help the world try to build the clean infrastructure that might keep temperature rises to the merely ‘vastly damaging’. The global community is vastly off the pace of the kind of investment that is needed even for that bit, never mind the ‘loss and damage’ part.
So the proposal is a new charge on the production of fossil fuels. It evolves principle of the hugely popular Robin Hood Tax – a tax on financial transactions, with the proceeds used for poverty alleviation and green investment – and applies it to coal, oil and gas companies.

POLICY-MAKERS HAVE BEEN FAR TOO TIMID IN THE FACE OF BIG OIL, AND THEIR LARGE POLITICAL DONATIONS. VERY FEW INITIATIVES HAVE SET ABOUT ACTIVELY TRYING TO KEEP STUFF IN THE GROUND.

It could make a huge dent in the money needed for loss and damage reparations. Even at $6 per tonne of CO2 – likely to be hardly noticeable by the industry – it is estimated a global tax could raise $75 billion per year. At $40 per tonne, it could raise half a trillion dollars, every year.  That’s the level at which oil companies themselves admit a carbon tax should be set – but one actually levied directly on them, which isn’t what they had in mind. And to help deal with the inevitable impacts to workers in the industry itself – the green transition must be a fair one – it’s envisaged that a chunk of the proceeds would be used directly to help support the reskilling and reorientation that the new clean economy so urgently needs.
Ideally, just like the Robin Hood Tax, it would be an internationally levied tax, but there’s nothing at all to stop a country getting on with it and unilaterally bring the tax in. It would need to be phased in clearly over time from a low starting point so that economies, less well-off-consumers, and the industry itself has time to adjust, and affordable clean energy was scaled up alongside. And it should be accompanied by a suite of other measures, like the axing of egregious subsidies for fossil fuels.
The proposal will, of course, provoke the considerable ire of oil companies. But frankly, there’s no deep and effective solution to climate change – and to the plight of countries like Ralph’s – which doesn’t annoy them. The world can only burn a fraction of the fossil fuel reserves we already know about, never mind prospecting for more. The business plans of the industry, however, are based on doing entirely that. Something has to give.
Find out more about the Climate Damages Tax.

Why it really is time to make the polluter pay | New Economics Foundation
.
.
.
Posted by Jeremy Woodward at 15:14