Selling meat without the plastic packaging > or, "shifting things back to how they used to be"

It is possible to sell meat without it being wrapped in plastic:
Buying and Storing Meat without Plastic » My Plastic-free Life

In a town near you:
Kenilworth butcher swaps plastic for paper - Kenilworth Weekly News

And here in Devon: 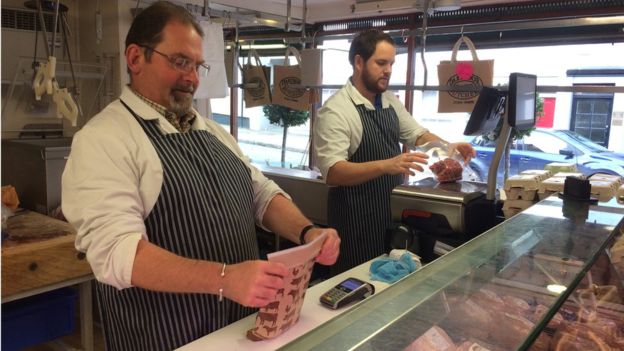 Dartmoor Butchers has ditched plastic bags for paper bags and plastic wrapping for waxed paper. "We're getting good feedback and everyone is really keen," said butcher Tom Stockwell, pictured right.
A Devon town has become the latest to sign up to a plastic-free movement to reduce its single-use plastic.
The initiative - set up by Cornish charity Surfers Against Sewage (SAS) - has been joined by Ashburton Town Council as well as 16 communities across the south-west of England. It has been supported by more than 200 communities nationally aiming to go plastic-free.
SAS said it is about "shifting things back to how they used to be".
Plastic Free Coastlines is a national project where communities can work towards plastic-free status by achieving various objectives. These include local councils committing to plastic-free alternatives and encouraging local businesses to get on board.

Apparently, though, 'millennials' are a little too squeamish:
Sainsbury's to introduce touch-free packaging 'for millennials' | Daily Mail Online

Environmentalists have hit out at Sainsbury’s for introducing plastic chicken pouches for "millennials who are afraid of touching raw meat".

The supermarket giant said it would be selling chicken in straight-to-pan plastic pouches after a survey revealed that many shoppers under the age of 35 were afraid to touch raw meat. The pouches known as “doypacks” in the industry are designed to allow consumers to cook meat without coming directly into contact with it.

"Customers, particularly younger ones, are quite scared of touching raw meat. These bags allow people, especially those who are time-poor, to just ‘rip and tip’ the meat straight into the frying pan without touching it,” Katherine Hall, product development manager for meat, fish and poultry at the retailer, told The Sunday Times.

But environmentalists have hit out on social media at the supermarket giant and claimed it was a waste of packaging.

One woman wrote on Twitter: “So they are adding MORE plastic packaging when other retailers are trying to reduce? Crazy @Sainsburys ! If you can't bear to touch raw meat you shouldn't be eating it.”

Michelle Davies said: “Is this a belated April Fool?! Instead of trying to cut plastic, @sainsburys is going to introduce special pouches for raw meat because – get this – snowflake millennials can't handle cutting it up. Pandering to a minority at the expense of the planet? Sheer stupidity.”

Others agreed, Kathryn Surcombe said: “We have a serious problem with plastic choking our world right now & @sainsburys are apparently putting chicken into plastic pouches that will no doubt be contained within additional plastic packaging. All because “Millennials” don’t want to touch raw meat. Seriously?”

But some people welcomed the decision. One person wrote: "I cannot touch raw meat at all, I used a fork/tongs to take it out the pack and prep."

Sainsbury’s based their decision to introduce the plastic pouches on market research carried out by the firm Mintel. It found that 37 per cent of millennials, born after 1980, preferred not to touch raw meat due to the fear of contaminating the food.

Ruth Mason, chief food chain adviser at the National Farmers’ Union, told the MailOnline said: "We find it disconcerting that shoppers are so removed from their food that they have these concerns. But we are aware it is a growing trend — and a lot of the data suggests there are concerns about handling raw meat.’

Sainsbury’s chicken-in-a-pouch range goes on sale on May 3.

The Standard has contacted the supermarket for further comment