... has designed something rather special for Sidmouth itself: 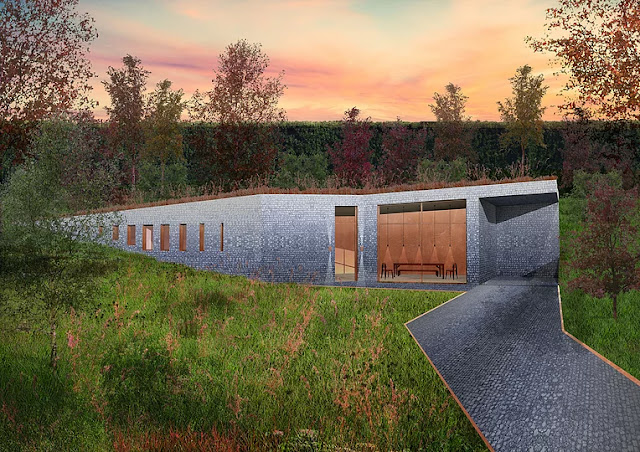 The Rock House is a detached dwelling set over a single storey, and partially submerged within the particularly varied site topography. Clad using different colours and textures of locally available Flint and with copper window frames and internal finishes, the house features a wild-flower green roof to help reduce its impact the local Area of Outstanding Natural Beauty.

BoBo | English and French Speaking Architect in France and the UK 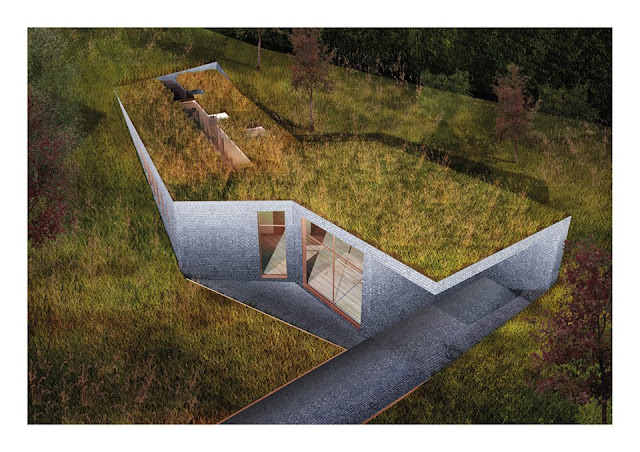 It was covered in the local press last year:

Architect behind plans for two homes in Sidmouth responds to criticism

Designs for Flint House, one of the buildings proposed for the grounds of Rockshaw in Moorcourt Close

The architect behind plans for two contemporary houses in the grounds of a Sidmouth home has responded to criticism.

The owner of Rockshaw in Moorcourt Close originally set out to create one home so his parents could retire to the town, but officer advice suggested the site could fit another dwelling.
Sidmouth Town Council’s planning committee unanimously opposed the two-dwelling scheme, fearing the site would be overdeveloped and ‘dominate’ the area, while neighbours raised concern about privacy and access.
The applicants now say it ‘may be sensible’ to reduce the scheme and propose a single house.
Henry Beech Mole, the Sidmouth-born director of BoBo, a design and architecture practice in Paris, who drew up the plans, said: “The design of the two new dwellings reflects our approach to this particularly sensitive and beautiful part of England. Conceptually, rather than the binary syntax of tradition versus progression, we have attempted to recombine elements of both, employing traditional and contextual materiality with more radical formal objectives.
“The result is an architectural offer than is both very much of its place, and simultaneously ontologically contemporary; exceeding in space standards, disability requirements, and environmental sustainability. Buildings very often exceed the lifespans of their occupants, and we have tried to design these modest buildings to serve for many years into the future.
“We are very aware of the potential impact of any development in the area, and I think upon reflection on the mixed consultation response that the scheme has received, it may in fact be sensible to reduce the scheme and propose a single dwelling. We are currently in discussion with the local authority about the plans, and are happy to work closely with them to produce a scheme that they can support.”
He said small-scale windfall housing could provide a subtle and more suitable alternative to large scale commercially-driven developments.
According the application, the partly subterranean five-bedroom Flint House and the two-bed Shingle House have been designed to fit into the topography of the site with ‘little or no impact’ on the neighbourhood amenity.
East Devon District Council will decide the fate of the plans.

It has now been approved: Here are more details at the planning authority:
17/2890/FUL | Construction of a single storey dwelling. | Rockshaw Moorcourt Close Sidmouth EX10 8SU
.
.
.
Posted by Jeremy Woodward at 14:25