Climate change: and the insurance industry

The insurance industry is concerned about the risks posed by climate change: Three major insurance companies have sounded the alarm on the “mother of all risks” that is climate change, calling on leaders of G20 nations to put an end to fossil fuel subsidies by 2020.

Multinational insurers Aviva, Aegon and Amlin have released a joint statement urging world leaders to implement a clear timeline for the phase-out of fossil fuel subsidies when they convene in China this week. The companies said fossil fuel subsidies dispute the G20 nations’ commitments to fight global warming, which were agreed by nearly 200 countries at the 2015 Paris Climate Conference, Reuters reported.

“Climate change in particular represents the mother of all risks – to business and to society as a whole,” Aviva CEO Mark Wilson said in a statement, as reported by ClimateChangeNews.com. “And that risk is magnified by the way in which fossil fuel subsidies distort the energy market. These subsidies are simply unsustainable,” Wilson added.

The insurance firms said G20 nations must go further than their previous commitments and vow to terminate assistance to fossil fuel companies within four years.

“We’re calling on governments to kick away these carbon crutches, reveal the true impact to society of fossil fuels and take into account the price we will pay in the future for relying on them,” Wilson said.

Reuters reported that based on the estimates by British think tank Overseas Development Institute, average annual subsidies for fossil fuel production were US$444 billion in 2013 and 2014. The value was roughly four times the subsidies for renewable energy in 2013, the news agency noted.

The insurers’ statement on fossil fuels and climate risk was also signed by the Institute and Faculty of Actuaries and UK-based energy firm Open Energi.

Energy round-up: the biggest risk to business and society 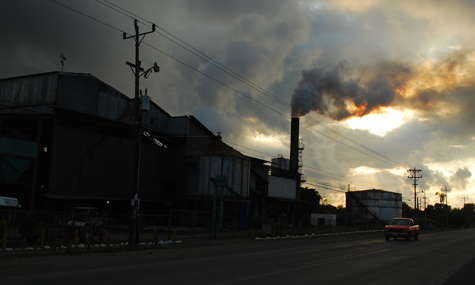 As the world lumbers closer to actually doing something about climate change – albeit dangerously late – one group of people in suits have been banging this drum for a very long time: the insurance industry.

They’re not the most beloved of folk on a day-to-day basis, but the likes of Aviva, Swiss Re and AXA have issued clarion calls for the world to wake up to the climate threat for decades.

Munich Re, a $50 billion reinsurer – that is, the insurance companies that insure the rest of the insurance industry; the folk that really carry the can for getting risk right – issued its first warning about global warming 43 years ago.

Which makes total sense. Insurance is about helping deal with short-term losses. The fundamentals of the business model of any insurance company is to make sure the amount you’re paying out to people suffering damage is lower than they’re paying you in premiums. So having a beady eye on what’s likely to make you pay out more money in the future is exactly what you do.

The insurance companies, quite simply, got scared – far earlier than most other companies. They saw that losses from global flood and storm damage and other symptoms of an unravelling climate system were rising.

Global payments for weather-related damage have doubled every decade since the 1980s and now stand at over $50 billion a year. Hurricane Sandy was estimated to have incurred $32 billion in costs for New York City alone. Along with the scientists, campaigners – and even the military - insurers and actuaries peeked over the horizon and didn’t like what they saw.

Any company that wants to be around and making money in a few decades time needs to wake up to the reality of climate change.

Many have. What’s left is two things: a rump of dinosaur businesses, like the fossil fuel industry and its champions, that may ultimately be institutionally unable to change from their short-termist, polluting ways; and a handful of politicians, such as former Chancellor George Osborne, who continue to paint short-term laggardliness on climate change as somehow good for business. It isn’t.

This week the insurers piped up again, urging the imminent meeting of the G20 in China to end fossil fuel subsidies by 2020, five years earlier than it has already committed to do.

As the head of Aviva says: “Climate change in particular represents the mother of all risks – to business and to society as a whole. And that risk is magnified by the way in which fossil fuel subsidies distort the energy market”.

The insurers are right, and they’re no longer alone in the business world either. Continuing to dole handouts to oil, coal and gas – to say nothing of grossly undertaxing their emissions – is like chucking petrol onto a forest fire.

You might qualify for a new solar program.
Find out if you are qualified now!