A solution to our housing problems: a solar eco-hamlet

A very successful project is happening in Wales:

Inside Glanrhyd, the first solar 'eco hamlet' in Wales 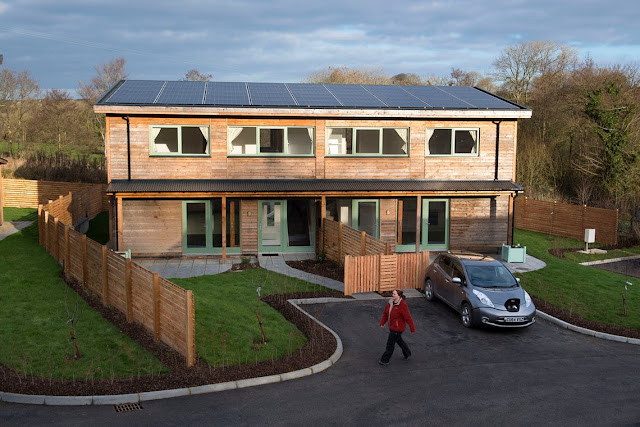 
@stevenmorris20
M ost of the houses in the Welsh village of Glanrhyd are of traditional construction – walls made out of hefty local stone, roofs of grey slate. They can get chilly when the winter winds whistle through the gaps.

The six houses that make up the “eco hamlet” of Pentre Solar look and feel very different. They are built using light, bright timber sourced from a nearby valley. The houses are carefully insulated, airtight and powered by solar panels.
Over the next few weeks the first tenants, local people from Pembrokeshire county council’s housing list, will move into what is being billed as the only development of its kind in the UK.
Their fuel bills are expected to be a fraction of their neighbours’ – and they will even get the use of a shared electric car for the school run, the shopping trip to nearby Cardigan, or even for a jolly to one of the many glorious local beaches.
“We are delighted with how it has turned out,” said Glen Peters, CEO of Western Solar, the company behind the scheme. “We can’t wait for people to come and start living here.”
If the project, which has been backed by the Welsh government, does work, the hope is that similar developments could be rolled out across Wales and eventually across the UK.
Western Solar’s first venture was a solar farm, five miles from the eco hamlet. Doubts that it was sunny enough in this part of the British Isles (after all, the nearby village of Eglwyswrw made headlines last yearafter it rained for more than 80 days in a row) proved unfounded and the project thrived.
Peters began to think about the number of people living in fuel poverty – according to the latest UK government figures, 10% of households in England alone cannot afford to heat their homes – and remembered his own chilly childhood in south London when he and his immigrant parents shivered in front of an inadequate one-bar heater.
Using technology borrowed from Germany, Western Solar built a prototype eco home called Tŷ Solar (Tŷ is Welsh for house). The idea was to produce a high-quality, brilliantly insulated, airtight house made of locally sourced timber and powered by solar energy.
They liked the results and expected investors to be as excited as they were. When the investors failed to show, the company decided to build its own “solar hamlet” to showcase its ideas.

It found an abandoned cowshed and was given a grant of £141,000 by the Welsh government to help turn it into a factory. Wood for the houses, larch and Douglas fir, was sourced from the Gwaun Valley and local people were hired and trained to build the homes.
About 40% of the fabric of the houses is made in the factory; it takes a week to make each one and four or five days to erect it. 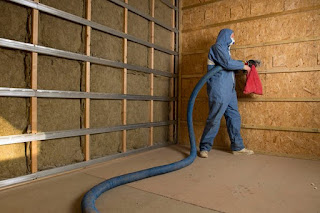 Paul Oxborrow of Western Solar fills a wall cavity with insulation material made from recycled paper. Photograph: Matthew Horwood/Athena Pictures for the Guardian
Corners have not been cut. When the company was sourcing interior doors, its workers refused to countenance the idea of them being made of rainforest timber. “They said they would make them themselves and did – out of local Douglas fir,” said Peters.
Using local materials and local labour is important. The company says every pound it spends stays in the local economy. The houses cost around £100,000 to build, which Peters says is comparable to a conventional build. A brownfield site – an old garage – was found and Pentre Solar (pentre means village) took shape.
Peters said the solar panels would reduce power bills from the UK average of £1,300 a year to more like £200. “On the most grizzly winter’s day, they will have to draw power from the grid,” said Peters.
It all means the houses are in high demand. Four of them have “affordable” rents and are being offered to people on Pembrokeshire county council’s housing register who have lived in the area for five years. Property can be hard to find here because so many houses have been bought up by wealthy outsiders as holiday homes.
Would-be tenants can expect stringent interviews. As well as the normal financial and background checks, they have to show they buy into the ethos of the development. “These are high-performance houses,” said Peters. “You can’t just knock a hole in a wall if you feel like it – or put in a cat flap for that matter.”
Western Solar’s ambitious plan is to build 1,000 more houses across the UK in the next 10 years and is looking for investors to help.

The Welsh government is keen to see the concept work elsewhere. One of the key pledges of the current Labour-led administration is to provide an additional 20,000 affordable homes by 2021.

After officially cutting the ribbon to open Pentre Solar on Thursday, Lesley Griffiths, the cabinet secretary for environment and rural affairs, said: “This scheme ticks so many boxes. We need more houses, we need more energy efficiency, we want to help people with fuel poverty. It’s been really good to hear how they have sourced local products. It’s great they’re using local people to build the houses.”
Paul Oxborrow is one of the local young men who has become a proficient carpenter by working on the Pentre Solar homes. “It’s been brilliant,” he said. “We’ve all learned so much and the houses look great. They’re good for the people who live in them and good for the environment. I’d love to live in one.”

Inside Glanrhyd, the first solar 'eco hamlet' in Wales | Environment | The Guardian
.
.
.
Posted by Jeremy Woodward at 12:31