This blog has previously posted pieces on what we mean by 'poverty' - for example:

This is 'absolute poverty':

Which is different to 'relative poverty', defined contextually as economic inequalityin the location or society in which people live.[3][4]
Poverty - Wikipedia, the free encyclopedia

"Relative poverty reflects better the cost of social inclusion and equality of opportunity in a specific time and space."

"Once economic development has progressed beyond a certain minimum level, the rub of the poverty problem – from the point of view of both the poor individual and of the societies in which they live – is not so much the effects of poverty in any absolute form but the effects of the contrast, daily perceived, between the lives of the poor and the lives of those around them. For practical purposes, the problem of poverty in the industrialized nations today is a problem of relative poverty (page 9)."

In 1776 Adam Smith in the Wealth of Nations argued that poverty is the inability to afford, "not only the commodities which are indispensably necessary for the support of life, but whatever the custom of the country renders it indecent for creditable people, even of the lowest order, to be without."

In 1958 J. K. Galbraith argued that, "People are poverty stricken when their income, even if adequate for survival, falls markedly behind that of their community."

In 1964 in a joint committee economic President's report in the United States, Republicans endorsed the concept of relative poverty. ”No objective definition of poverty exists... The definition varies from place to place and time to time. In America as our standard of living rises, so does our idea of what is substandard."

In 1965 Rose Friedman argued for the use of relative poverty claiming that the definition of poverty changes with general living standards. Those labelled as poor in 1995, would have had "a higher standard of living than many labelled not poor" in 1965.

In 1979, British sociologist, Peter Townsendpublished his famous definition, "individuals [...] can be said to be in poverty when they lack the resources to obtain the types of diet, participate in the activities and have the living conditions and amenities which are customary, or are at least widely encouraged or approved, in the societies to which they belong (page 31)."

Brian Nolan and Christopher T. Whelan of the Economic and Social Research Institute (ESRI) in Ireland explained that, "[P]overty has to be seen in terms of the standard of living of the society in question."

Relative poverty measures are used as official poverty rates by the European Union, UNICEF and the OEDC. The main poverty line used in the OECD and the European Union is based on "economic distance", a level of income set at 60% of the median household income.

The Nobel Prize-winner in economics Angus Deaton has been critical about proposed changes in how we measure 'poverty':

Despite the change in definition, absolute poverty is nevertheless decreasing quite significantly: 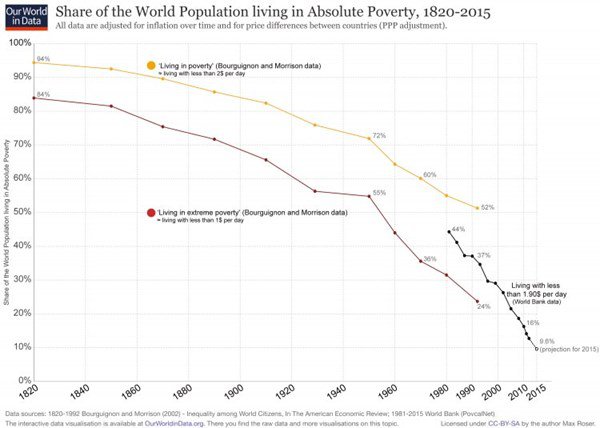 And the pie is increasing due to technological progress:
Futures Forum: Are things actually getting better?

Which is good:
Futures Forum: The poor need affordable energy
Futures Forum: "Abundant, cheap electricity has been the greatest source of human liberation in the 20th century."

... as being 'poor' is about not getting a look in:
Futures Forum: Economic freedom and political equality at the local level >>> or, the triumph of corporatism

... including not being able to get a roof over your head:
Futures Forum: Housing crisis - what housing crisis? .... "Evidence for a UK housing shortage is hard to come by."

... or not being able to afford milk in the West Country:
'Some mothers can't afford baby milk': One in five children in poverty in county | Gloucestershire Live

With the UK PM talking about how "Free trade, partnership and globalisation have had such a positive impact, lifting millions out of poverty, broken down barriers and raised living standards"
What did Theresa May’s Davos Brexit speech reveal? What did she say about globalisation and the UK’s plans for leaving the EU? - The Sun

And here's another idea:
Futures Forum: The sharing economy >>> “This on-demand, or so-called gig, economy is creating exciting economies and unleashing innovation. But it is also raising hard questions about workplace protections and what a good job will look like in the future.
.
.
.
Posted by Jeremy Woodward at 01:00