Plans for Port Royal: anticipating a Regeneration Board >> affordable housing at Eastern Town

Sometime soon, the Port Royal Reference Group will be meeting up with the consultants:
Futures Forum: Plans for Port Royal: anticipating a Regeneration Board >> consultants appointed for the Scoping Study

One of the issues which the parties will have to address, during the Scoping Study and beyond into the regeneration project, will be the promise of affordable housing.

The Local Plan makes clear that:
1) Sidmouth is to have 100 new homes, plus 50 windfalls; and
2) Sidmouth's housing allocation is to be 50% affordable.

To quote from the rather embarrassing communication between  Planning Officers and agents for Pegasus over Knowle:

Futures Forum: Knowle Relocation Project: How to classify the proposed development: as C3 housing or as C2 care home?

In which case, we would be expecting the District Council to push for 50% affordable housing 'on site' at Port Royal:
Futures Forum: Plans for Port Royal: the draft Local Plan and 30 new homes

To give Planning Officers due credit, they have put together an exemplary project at Mill Street in the Eastern Town:

Planning Officers had to back down on a further project, however, because of strenuous opposition from the Chamber of Commerce over loss of carparking: 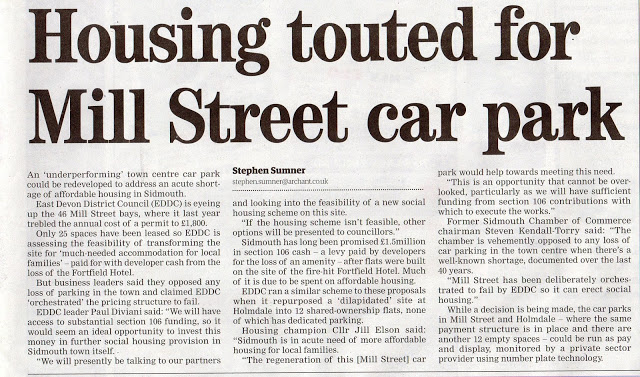 There is overwhelming support, though, for more affordable housing in the Sid Valley:
Futures Forum: Neighbourhood Plan: results coming in from questionnaire

The problem is where to put it, if at all, at Port Royal/Eastern Town...

There's currently a very interesting thread looking at these on Streetlife:

Hamfisted  5 days ago
A bit of history...

The Eastern Town is where the poor people lived over a century ago. See the old maps of the cluster of "slum" dwellings and small artisan workshops, the Marsh chapel etc. the substantial community who lived and worked on the land that the Ham carparks now cover by this beautiful coast. This was the ideal location to train young people, recruited by poverty, to become canon fodder  for the Empire's war machine, in good time for the bloodbath of 1914-1918. The Drill Hall was built on land given to the people for recreational purposes by George Galloway Radcliffe, with a covenant stating that when no longer needed for military training it would revert to the people of Sidmouth.

When a local property developer made an offer to EDDC early in the 21st century, the council had to secure the whole Port Royal site so it could flog it off with planning permission. But EDDC did not own that bit of the seafront on which the Drill Hall stood. So they got the building "condemned" and arranged with the Ministry of Defence to "lose" the 19th century covenant so that the trustees of the cadet force would be required by law to sell it at the best price rather than return it to the people; EDDC ignored repeated requests to contact the retired solicitor and town clerk who could swear an affidavit about the covenant. Instead they used our money to buy back the building that was ours in the first place. Then the banking crisis of 2007 wrecked their cunning plan for a quick profit. So the Drill Hall festered and the young people of the town now have the choice of using the back of the Hall for drug and drink parties or to go for healthy training in the new Drill Hall at Stowford (where more poorer families now live).

Maggie 5 days ago
Interesting apart from the last 6 words which are unnecessary and don't add anything to your post, apart from possibly annoying people who live on Stowford. I don't by the way...

Hamfisted  4 days ago
Maggie Thanks Maggie. I apologise to anybody I have offended, which was not my intention. My context is that children who grew up in the Eastern Town in the 80s and 90s cannot afford to return with their own children because of the inflated prices of houses, over half of which are standing empty most of the year. So "successful" working families are living further away from the sea up the valley (and many key workers now have to commute in from more distant towns). The house prices speak for themselves.

Polarising Plebeian 4 days ago
Hamfisted, not being able to return is rather a national problem everywhere in the UK, not just local to the Sid Valley? A true can of worms topic.....

Are there reliable statistics available proving that really half of them stand empty?

Barnacle Bill 3 days ago
Problems also caused by many elderly/retired couples living in 4-5 bedroom houses - bring back the bedroom tax!

Hamfisted  2 days ago
Polarising Plebeian You are quite right to fact check. Casual estimates are not innocent rhetoric nowadays. I honestly have not seen a statistical analysis of the area. I just know a street where there is only one resident and many where half the houses are empty; and I have counted the number of holiday lets in another terrace, and I hold keys on behalf of a few friends who are seldom here. I am not moralising against them but generalising from the density of traffic at holiday times, the house prices, etc. Maybe there is a fine-grained analysis of under-occupation somewhere?

Hamfisted  2 days ago
Barnacle Bill The bedroom tax hit on families on benefits, particularly those with a member with a disability needing special accommodation; not on couples or widows trapped in a family home after the kids have left the nest. We need more flexible housing stock of course - but remember the chief executive of Pegasus Homes was found guilty of mis-selling before his previous company was wound up after conning old people into handing over all the equity in their home in return for a lifelong lease on a retirement flat.

Real Sidmouthian  2 days ago
Couples 'trapped' in a 4/5 bedroom house? Lovely trap. Sell up and move once the kids have flown the nest. That's what we did but I was already here being born here. Trouble is that's what most of the 'came here to die and don't want anything to change now I'm here' brigade did to end up in Sidmouth in the first place.

Hamfisted  2 days ago
Real Sidmouthian  Yes, although architectural social policy has made downsizing difficult for some in recent decades, there are undeniably hoarding dragons and selfish giants and misers in mansions who need to be released from their unsustainable solitary sad lives. Which brings us back to the Drill Hall, whose history is recorded with accurate references on the website http://drillhall.historic-sidmouth.uk
This history does not draw controversial conclusions about the appropriation and degradation of public space but that is my interpretation of what has been going on. How happy the selfish giant (EDDC in this case) can become when the younger generation are allowed access to their play space, dancing space, singing space, community space...

Real Sidmouthian  2 days ago
It's already owned by the public. It took over thirty years to get it into public ownership (which those of us who have been here all the time would know) and now it finally is, it's time to flatten it and provide something befitting of our beautiful seafront! Knock it down....couldn't resist either.

Hamfisted  2 days ago
Real Sidmouthian  Sorry mate. It is now owned by EDDC, the local authority, which is not at all the same thing as "the public". EDDC make this distinction very clear, very often. See the notice at the entrance to the Knowle about the Public Right of Way Act 1932.

This particular public hall did belong to the people of Sidmouth (which is as near as you can get to "the people" in the local context) for about a century but the Trust and the covenant of the gift were deliberately broken, and a dubious notice of "condemnation" was placed on the building, to remove from us the right even to look inside the doors. Maybe we should give up squabbling about whether to knock it down or renovate it. It isn't ours. It is theirs. "Resistance is useless."

Of course we do elect representatives to the local authority and if Councillors had the bottle they could challenge the public servants now known as "officers" who make the decisions. But that is another story.