On the front page of its latest weekly newsletter, Waitrose features a piece on its efforts over food waste:
Surplus food & food waste disposal

By SEAN POULTER CONSUMER AFFAIRS EDITOR FOR THE DAILY MAIL
PUBLISHED: 01:13, 19 January 2017
The stores insist they have made great strides in reducing food waste and ensuring more fresh produce is distributed to charities and food banks.
However, an official study published last week found household food waste has risen by 300,000 tonnes a year between 2012 and 2015, taking it up to 7.3m tonnes a year.

Meanwhile, there have been other initiatives happening in the West Country:
Hugh's War on Waste | River Cottage
The Bristol Skipchen | Facebook

From the skip to your plate: A non-for-profit cafe wants to raise awareness about the "crazy" amount of food waste in Britain 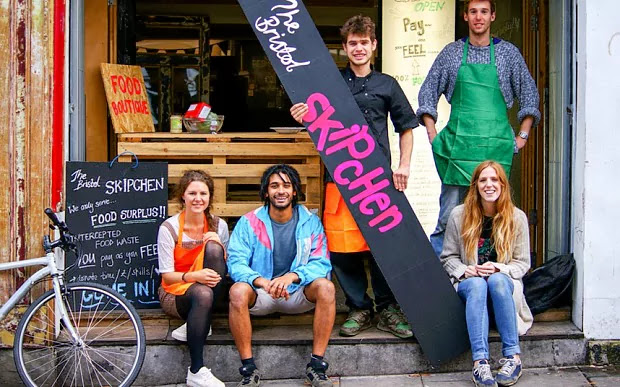 A lunchtime snack made out of ingredients saved from a skip may not sound very appetising, but a Bristol cafe is proving the opposite.
Skipchen, a non-for-profit cafe, serves up food past its sell-by date and dumped in supermarket and restaurant bins.
A team of volunteers go out every night searching through skips for any food waste that can be turned into a meal.

The Baffler magazine has taken us to Athens where the Skipchen has been at work:
Opening Doors | Sophie Weiner

Sidmouth and the surrounding villages in east Devon are, in general, prosperous areas. But occasionally some people find themselves without food or the money to buy food.
The Food Bank was set up by local churches to help in times of crisis by distributing much needed provisions. Local Supermarkets Waitrose, Co-op, Tesco and Sidford Spar kindly support this initiative by providing collection points for food donations


News from Lois 13th January
It’s an up and down start to the new year; last week week we had eleven clients, this week only six. Not many organisations regard fewer clients as good news, but ours does. It means people are financially secure enough to feed themselves.
There remains homeless people in our area and beyond. Churches in Britain and Ireland are recognising the 22nd January as Homeless Sunday to give this issue wider publicity and to consider practical steps to alleviate the problem.

An alternative 'charitable' action is happening in the States:


"Little Free Pantries" Are the Latest Innovation in Private Charity

“The bright red box is about 2 feet wide and is mounted on a post near the street. Ballard and her son check on it every day and restock as needed.
‘My son is 6 years old, so it gives him a little chore to kind of watch it and see what comes and goes and who comes and goes, and maybe learn a little lesson from it,’ she says.
There's a door on the front of the box but no lock, so anyone can take what they need 24-7. In the beginning, Ballard was providing all of the food. Then word spread and donations from the community starting [sic] pouring in.”

According to NPR, the idea originated with Jessica McClard of Arkansas, who attributes the popularity of the miniature food pantries to the ease with which they allow people to help their neighbor.
"Little Free Pantries" Are the Latest Innovation in Private Charity | Foundation for Economic Education
.
.
.
Posted by Jeremy Woodward at 10:56

Custom cream boxes are tailored made as per the client's demand. The boxes are uniquely printed to help a business look differently attractive in the market. These cream boxes are usually made with finest quality materials and plays important role in promotion of the brand. Customers love to buy a product packed in luxurious packaging.

PackagingNinjas is the best packaging brand and it is apparent from its operation because it is now has gained a huge experience and making very good quality packaging boxes which are easily affordable. Not only these French fries boxes are good for fries packaging but they are very fantastic from the perspective of protecting the fries and the environment as well.

Custom Candle boxes are used for packaging, storing and displaying candles. Since years, candles have been used as common gift items. Brands can enhance the look of their custom candles packaging boxes to maximize their sales. Every aspect of the candle gift boxes is customizable. You can choose a shape, colour and size of your choice.

Candle boxes are used for packaging, storing and displaying candles. For years, candles have been used as common gift items. Brands can enhance the look of their custom candles packaging boxes to maximize their sales. Every aspect of the candle gift boxes is customizable. You can choose the shape, color, and size of your choice.

The corrugated paper is used to make custom corrugated boxes. These boxes contain layers and air spaces. People use it in the daily routine for the packaging of the bulk of the material. The Air spaces in it make it flexible. It is a product of everyday use. Therefore, Packaging Ninjas provides you the best quality of custom corrugated boxes at low prices. We offer you different deals for ideal boxes.

Organic creams are also trending due to their zero side effects. Custom cream boxes wholesale serve for the purpose of packaging for cream boxes. These custom boxes can be customized in size, style, color, and designs to beautifully and perfectly fit the cream. Custom cream boxes attract the onlooker and increase the profit margins.

A saw your post you are doing such great work. Here I want to show you my Business which is about Custom Cereal Boxes with free shipping. RushPackaging is a guide in the field of packaging. We are working in the USA but we give our custom packaging solutions throughout the world. We charge a sensible amount in terms of our quality services. Choose us to get the best for yourself.
Popcorn Boxes Wholesale
Custom Burger Boxes
Cupcake Boxes Wholesale

Your blog is very helpful to me. I hope you continue to share and support us by sharing other good blogs.
If you are looking for top and trendy packaging then click on this link
Donut Boxes
And if you want to make your packaging better, click this link
customized snack box