There are fears that the paving over of front gardens will simply make flooding more likely:
Futures Forum: The decline of the British front garden: "There's an environmental cost. Paving increases the risk of flash flooding - instead of grass and soil soaking up moisture, it runs straight off paving and overwhelms drainage systems."

It's happening in Sidmouth:
Futures Forum: Urban runoff and flooding in Sidmouth... Relying on 'Victorian plumbing' or building on soakaways...

And it's happening in Exeter: 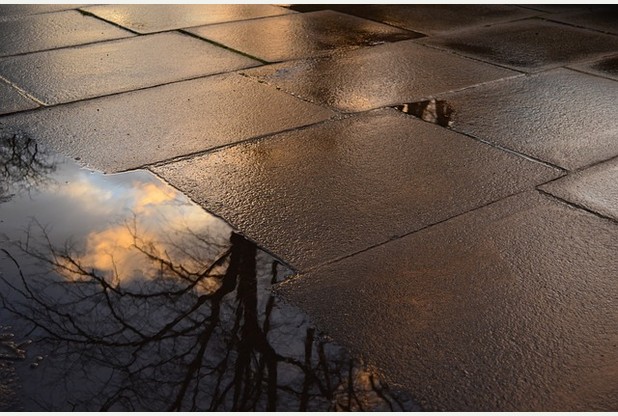 The trend of paving over gardens is putting Exeter homes at risk of flooding as the city is set to see a 73 per cent increase in rain, and paved gardens could see the city's drains overwhelmed.
Many gardens in Exeter have been paved over to make them low maintenance or provide off-street parking, but surfaces that do not absorb water reduce the amount of rainfall that can be dealt with naturally, increasing runoff. This runoff generated from heavy rainstorms can overwhelm urban drainage systems and cause flash flooding.
Dr David Kelly, from Heriot-Watt University in Edinburgh, has assessed the increased runoff from a "typical" front garden depending on how much it is paved in the face of the more intense rainfall that is expected with climate change. He looked at the impact of paved gardens in Edinburgh, London, Exeter and Manchester with the increased heavy rain the cities could see in the 2050s and 2080s.
All four cities are expected to see increases in rainfall as a result of climate change, even with low greenhouse gas emissions, with Exeter seeing the greatest increase of up to 41% by the 2050s and as much as 73% by the 2080s.
With more intense rainfall, there will be a dramatic increase in the contribution of paved gardens to the overall amount of runoff in each of the cities, to levels urban drainage systems are unlikely to be able to cope with, Dr Kelly found.
Based on the number of gardens in each city which are currently at least three-quarters paved, runoff from a storm in Edinburgh in the 2080s could increase to as much as 29,000 cubic metres of water – enough to fill 12 Olympic swimming pools. In Manchester the total runoff could also fill 12 Olympic swimming pools, in Exeter the figure is around half as much, and across London the amount of runoff created could fill a swimming pool 100 times over.
But the research also showed that gardens without any impermeable paving produced no runoff, even in a one-in-50 year heavy storm.
Dr Kelly called for a tightening and enforcement of regulations to prevent more gardens being paved over. And he said there was need to raise awareness among householders about the impacts of climate change and the "little bits of actions they can do themselves" to encourage social responsibility.
People should be encouraged to "de-pave" their gardens or introduce more natural vegetation to reduce runoff, he suggested. He said domestic front gardens covered almost 30% of urban space and played a vital role in managing surface water runoff, with natural gardens acting like "sponges" to absorb water.
"The growing trend of paving over front gardens has put this role in jeopardy, and at the same time, the impacts of climate change mean that the UK is facing increasingly frequent and intense rainfall. Existing urban drainage systems will be inadequate to cope with the level of increased runoff from paved front gardens," he warned.


Exeter rainfall to increase by 73 per cent - and your paved garden will make the city flood | Exeter Express and Echo
(Greater) Exeter area rainfall expected to increase by 73% say researchers | East Devon Watch
.
.
.
Posted by Jeremy Woodward at 11:29