The Drill Hall is receiving a lot of attention:
Futures Forum: Latest from the Rescue Sidmouth Drill Hall Site

Indeed, it is not only part of the area's Conservation Area and considered as a 'non-designated' heritage asset:
Futures Forum: Locally Listed Heritage Assets: and deliberate neglect of the Drill Hall

... but it will also be part of considerations for the future redevelopment of the area:
3 November 2016 - Experts invited to tender for Port Royal Scoping Study - East Devon
http://www.sidmouth.gov.uk/images/PORT_ROYAL_RG_Notes_201016.pdf

A piece in the latest Herald looks at the latest project to study the heritage of the Drill Hall:
Sidmouth Drill Hall Research Site

- as well as a separate campaign to save the building:
drillhall.rescue.historic-sidmouth.uk

It should also be pointed out that these two projects are separate from - but not rivals to - the Sidmouth Drill Hall Hub community interest company, which has done work on Responsible Tourism and has commissioned an Economic Evidence Report for the area:
Sidmouth Drill Hall Hub CIC | Promoting positive regeneration

The drawing which goes with the Herald piece is not the original drawing - but is actually a drawing produced by Sidmouth architect Paul Jeffries, recreating what it probably looked like.

Looking at the Sidmouth Drill Hall Research Site first, which shows the reconstruction of the frontage, we have a pretty good idea of what it must have looked like:

Architectural drawings are an important component of researching a space or building. I am very fortunate to have the talented young Sidmouthian architect Paul Jeffries working with me on this project.
He has given his time and skills for free and produced all the images on this page. Reconstructing what the building originally looked like is a long and painstaking task which requires constant reference back to the partial photographic record we have managed to find. As such the image is being constantly revised in the light of new knowledge.
Areas which are greyed out are where further revision is needed. 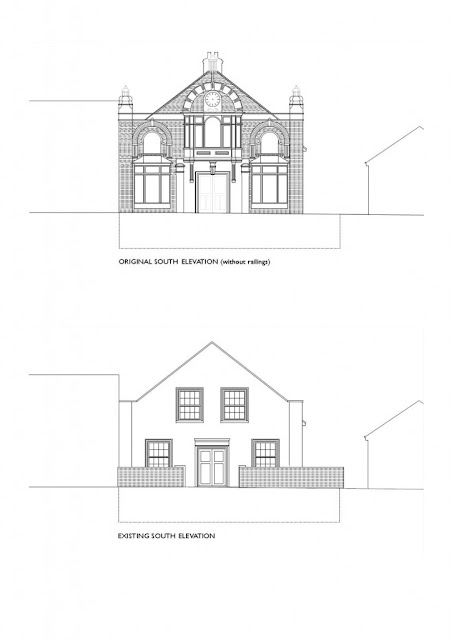 And now here's the piece from the Herald - together with a 3-D version of the above drawing: 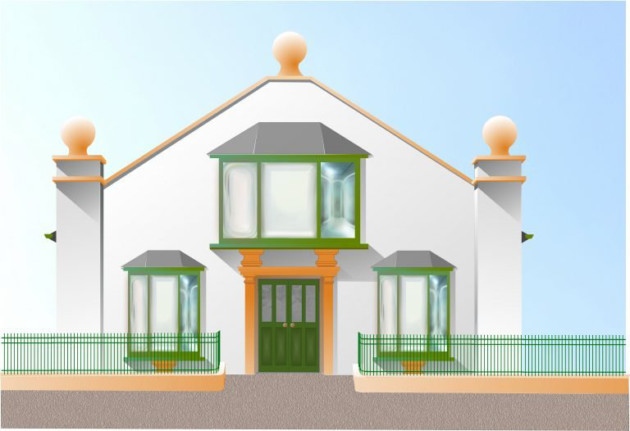 A retired 3D designer has taken the reins of a project to ‘rescue’ Sidmouth’s Drill Hall, as options to renew Port Royal are explored.

Mary Walden-Till feels long-standing campaigners have shifted their focus, so there was ‘no one else who could speak for the building itself’.
She is compiling an online dossier on its history and is now seeking support for a campaign of her own to retain the Drill Hall.
It comes as Sidmouth Town Council and East Devon District Council are commissioning a £10,000 ‘scoping study’ to explore options for Port Royal’s regeneration.
Mary – who has previously voiced fears the Drill Hall could be lost if eastern town is renewed – said: “I do not intend to run an ‘anti-redevelopment’ campaign.
“The councils are not viewed as the enemy, but what they are doing will be held up to scrutiny.
“With my background in 3D design, I am bound to view any design solutions critically – in the proper meaning of the term.
“I will be applauding the things they get right, as much as pulling them up on the things which, in my opinion, they get wrong.”
Mary, who has also taught design in schools, said the interest in eastern town means the building can no longer be considered ‘in isolation’, adding: “If we are to save the Drill Hall, we have to show its place within this proposed revamping.
“I am looking for people to get involved. I want help, but I also want people to feel it is their campaign and that what they do truly makes a difference.”
Mary takes over active campaigning from the Sidmouth Drill Hall Hub community interest company (CIC), whose founders have long-fought to save the building.
Director Matt Booth said the CIC has brought in EU investment for the now-established Sea Fest and runs workshops in schools on fishing heritage, but it is ‘no longer connected to a campaign to save and restore the building’.
Louise Cole, another CIC director, urged residents to engage with the town council’s Neighbourhood Plan to express their hopes for the Drill Hall and the wider Sid Valley.
Despite their similar names, Mary emphasised that her campaign is completely separate from any previous efforts.
Hers is currently a ‘one-woman show’ and she is calling on others to support her.
She can be contacted through her campaign website, www.drillhall.rescue.historic-sidmouth.uk.
Her history of the Drill Hall is at drillhall.historic-sidmouth.uk.
Mary intends to build a broader ‘Historic Sidmouth’ website to cover topics including culture and sport and hopes it will one day be comparable to the highly regarded Branscombe Project.