Knowle relocation project: throwing good money after bad >>> How the Honiton and Exmouth HQs will not improve on the current HQ

And despite more and more questions being raised around its various projects:
Futures Forum: The unravelling of projects in East Devon

Claims EDDC is relocating from Sidmouth ‘at any cost’ 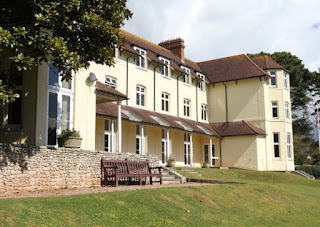 District chiefs have been accused of progressing their relocation project ‘at any cost’ after they approved adding nearly £700,000 to the bill.

East Devon District Council (EDDC) is leaving Sidmouth for new premises in Honiton and a renovated Exmouth Town Hall. The latter is now vacant, but it will need work including a new boiler, rewiring and the removal of asbestos – renovations now estimated at £1,669,000, up from £1million in March 2015.

EDDC cabinet members last week agreed to accelerate the refurbishment so some key staff can relocate as early as November 2017.

Councillor Cathy Gardner told the Herald: “This truly is relocation at any price, because council tax payers will pick up the bill.”

The cabinet meeting heard that a new planning application to redevelop EDDC’s current HQ Knowle could be six months away or more after it refused PegasusLife’s bid for a 113-home retirement community earlier this month. The developer is yet to reveal if it will appeal the decision but the £7.5million it offered was intended to help fund the authority’s £9.2million relocation project.

Cllr Gardner said the project was initially sold to councillors as ‘cost neutral’ but is now costing taxpayers ‘over £2million and counting’ and cash will have to be borrowed. She added: “Proceeding with the refurbishment of Exmouth Town Hall weakens the bargaining position of the council with any purchaser of the Knowle – they know that the council is desperate to secure a sale. The cabinet approved this extra cost for Exmouth Town Hall without seeing an up-to-date report on the budget for the project overall. They have approved an increase in ignorance of the total costs.”

An EDDC spokeswoman said: “The council remains committed to relocating the rest of its staff into fit-for-purpose offices as soon as possible, despite the recent planning application for Knowle being rejected. The current budget and income projections for the overall project - taking into account both Exmouth and Heathpark - remain balanced. The council has a continued and reasonable expectation that relocation from Knowle will show significant savings compared to remaining in Sidmouth. The financial case will be tested again, as it was in March 2015 when the council decided to relocate.”

The decision was ratified at a full council meeting on Wednesday.

Questions remain over East Devon District Council’s (EDDC) relocation project - amid rising costs and claims of a lack of transparency. The authority has been accused of pushing ahead with the move away from Sidmouth to Honiton and Exmouth ‘at any cost’ after it approved adding nearly £700,000 to the bill.

Councillor Cathy Gardner last week argued proper scrutiny of the project cannot be achieved as long as documents are not made public. She also raised concerns about members being asked to endorse decisions relating to a contract - between the would-be developer of Knowle and the council - they have not even seen.

In response, EDDC leader Paul Diviani said the contract with PegasusLife is ‘commercially confidential’, but admitted that the developer could potentially ‘renegotiate’ a price for the site after its bid to build a retirement community was refused.

At a full council meeting last Wednesday, Cllr Gardner accused Cllr Diviani of failing to answer her questions and pressed for an answer on whether the contract with PegasusLife has an expiry date. Cllr Diviani said: “We have to wait to hear from PegasusLife. They have the option of coming through with re-submission, or appealing, and we will see what happens there. We will work to get the best possible result we can, but if it happens that the deal falls apart, then we will move forward.”

Cllr Gardner asked for reassurance that the £7.5million PegasusLife has agreed to pay could not be renegotiated.

Cllr Diviani said: “If the circumstances are such, then quite obviously they will be able to renegotiate, but let’s not have speculation about what’s going to happen, let’s have a decent dialogue with PegasusLife so we know exactly where we are going from here.”

Cllr Diviani refuted claims that EDDC’s approach to transparency involves releasing only documents relating to relocation that ‘no-one is interested in seeing and holding on to the rest’. He said: “Documents will be released in due course. They are coming through on a fairly regular basis and it does take time to pull them all together, but they will be expedited as soon as they possibly can.”

Resident Richard Thurlow spoke out about increased costs relating to the refurbishment of Exmouth Town Hall ahead of relocation – which, he says, would now cost more than renovating the existing Knowle offices. He claimed that there was no detail or adequate rationale to explain the reasons for the increased costs.

It gets more interesting.

This piece compared the Honiton and Exmouth sites with Knowle - as far as public access is concerned - and the current HQ fares much better:
Futures Forum: Knowle relocation project: a message for the New Year >>> that there are a lot of very mixed messages

The SOS pieces compare the different sites in terms of how much seating there will be, as this photo demonstrates: 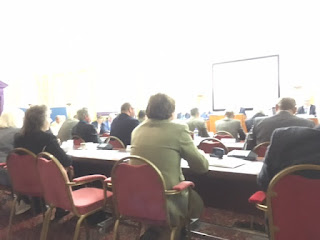 The seating arrangements are very different from those in the Knowle Council Chamber, where councillors largely have their backs to the public gallery

But will the number of seats provided for the public in the Exmouth Council Chamber be adequate?

Council Chambers compared | Save Our Sidmouth

And the other question has to be:
Will the number of seats in the Honiton Council Chamber be adequate?

As a correspondent notes:

There are 49 seats available for councillors and officers in the new HQ.
Will the remaining councillors therefore sit in the front row with their backs to the public?
I would have thought a purpose built £11m chamber would be able to accommodate a full council meeting! 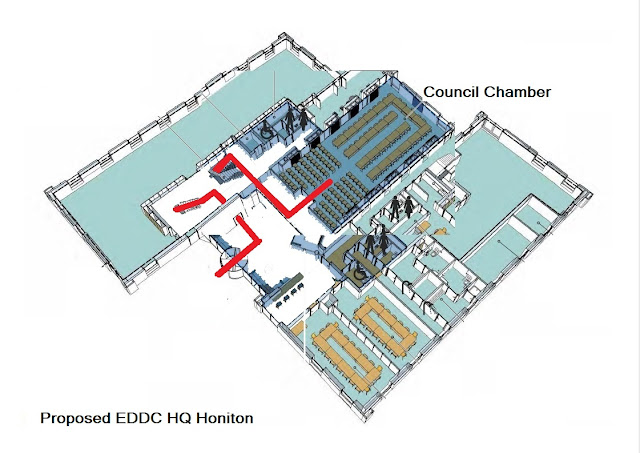 Council chambers compared (continued) ..Would seating capacity be fit for purpose at proposed new Honiton HQ? | Save Our Sidmouth
.
.
.
Posted by Jeremy Woodward at 13:21