Many of these issues are going to be talked about over a good meal, just up the road next week:
Futures Forum: Food Sovereignty and Community Supported Agriculture >>> event 13th January at Trill Farm, Axminster

The tendency, however, is towards a 'high-overhead, capital-intensive production technology':
Futures Forum: Transitioning to a post-scarcity world

Above all, it's about losing control, with 'farmers becoming dependent on a range of industrial inputs':
Futures Forum: Norman Borlaug and the “Green Revolution”: a centenary

We're looking at 'low-tech' farming:
Futures Forum: Living without technology for a year

Which is also good for the climate:
How low-tech farming innovations can make African farmers climate-resilient

Which also goes by the name of 'agroecology':
Agroecology Home 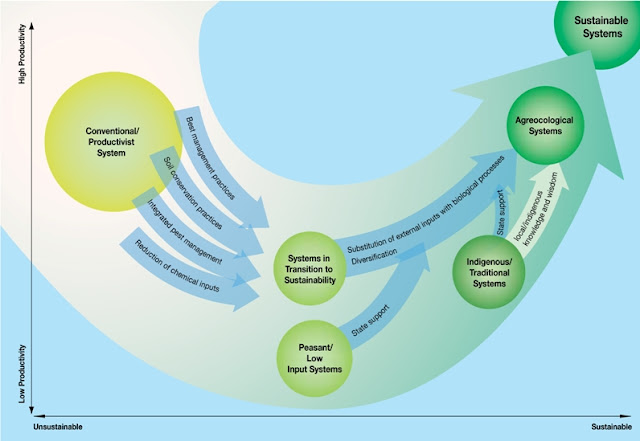 Here's a piece from the Ecologist from a couple of years ago:

Sustainable, agriculture must be low-input - and this can only achieved in diverse, tightly integrated agro-ecological systems. The real future of farming lies in complex polycultures ... in short, mixed farming.

We need to rebuild the fertility and social capital that were once safeguarded in our family farm structure.

To work its wonders nature employs three main tricks. It is extremely diverse, tightly integrated, and makes do on low inputs - basically on what is around.
Certainly, it makes no use of fossil fuels. The sun and geothermal heat (with tidal power around the edges) provide all the energy that's needed.
Efficiency means diversity
Common sense and many a field and laboratory study show that diversity above all is the key to sustainability, resilience, and to what ought to be meant by efficiency - making best use of what's around.
When there are many different species side by side and each is genetically diverse, parasites and pathogens can't find a foothold in the way they can with today's monocultures. Demonstrably, diverse organisms interacting make far better use of available nutrients.
Diversity in farming translates into polyculture - mixed farming with genetically varied crops and animals, all raised synergistically. Low-input translates into organic, or something pretty close.
Diverse, organic or low-input farms when well managed can be among the most productive of all, per unit area of land. They are also among the most wildlife friendly. Clearly they are what the world needs.
Complex and skills-intensive
Such farms are complex - in general, the more complex the better. So they need to be skills-intensive - a lot more farmers will be required to run them.
When enterprises are complex and skills-intensive there is little or no advantage in scale-up and so in general they need to be 'small-to-medium sized enterprises', or SMEs.
In short, the farms that the world really needs, run along agroecological lines, should in general be small to medium sized, very complex and polycultural, and as near to being organic as can sensibly be managed.
Such farms would be quite productive enough and provide food of the highest quality while keeping the rest of nature in good heart.
These 'anachronistic' farms provide half the world's food
Already such farms, in traditional form, worldwide, provide 50% of the world's food - even though they have been sadly sidelined by the powers-that-be: treated as an anachronism. The industrial agriculture that soaks up most of the investment and research supplies only 30%.
Agroecological farms conceived as SMEs would also provide many millions of fulfilling jobs worldwide - including enough, in Britain, to soak up the million under-25s who are now unemployed or seriously under-employed.
We are often told that organic, small-scale, mixed farming is simply "unrealistic", a misguided exercise in nostalgia. Yet it is based on fundamental principles of biology and demonstrably works.
The ideology of industrial farming
In contrast, the industrial model now known as 'conventional' is pure ideology: absolute faith in high tech, geared to the maximisation and concentration of wealth.
It demands maximum output at what is perceived to be minimum cost: more and more agrochemistry to increase the yields from fields and crops and livestock that are already overstretched, with less and less labour employed.
This means there can be no complexity: monoculture must rule. All must be done on the largest possible scale to spread the costs. All outputs are conceived first and foremost as commodities to be sold on the world market to the highest bidder.
Speaking in January 2013 at the other Oxford Farming Conference, Environment Secretary Owen Paterson urged British farmers to produce more beef to sell to the growing Chinese middle class.
We should also export more biotech products, said Paterson, not because the world needs them, but because they are potentially lucrative.
This advice is perfectly in line with neoliberal thinking - but totally at odds with the principles of agroecology, common sense, and common justice.
Farming is for feeding people
Britain once had an agriculture well suited to feeding people. The development of mixed farming in the 18th century produced a step-change in farm productivity allowing a fast-expanding population to be fed.
So successful was the system that it lasted more than 200 years. At the end of World War Two much of lowland Britain was still occupied by family-run, small and medium-sized family farms.
Through good times and through bad they survived without pesticides or chemical fertilisers and with few subsidies from the state. At times of national emergency they were able to up their game and feed the nation.
And in times of hardship they were content to hunker down and wait for the pendulum to swing back. Together our family mixed farms were one of the nation's great assets.
The war against small farmers
For the past few decades governments, economists, supermarkets, agri-business corporations, even farmers' own leaders have waged a relentless campaign against family mixed farms, representing them as out-dated and inefficient.
Subsidies and the tax system have favoured the large-scale, mechanised, chemical-dependent unit. Markets for the healthy, nutrient-rich foods produced by mixed farms have been ruined by industrial commodity producers who have banked big profits and left taxpayers to pick up the tab for degraded foods and a polluted environment.
It's now clear that this nationwide experiment in chemical agriculture has failed.
Just as the banks are having to rebuild their capital reserves, we need to rebuild the fertility and social capital that were once safeguarded in our family farm structure.

Colin Tudge is a biologist with special interests in natural history, evolution and genetics, food and agriculture, and moral philosophy. The author of Good Food for Everyone Forever and Why Genes Are Not Selfish and People Are Nice, he is co-founder of the Campaign for Real Farming.
His latest venture is Funding Enlightened Agriculture which seeks to help new entrants to farming find start-up funds and become investment ready.
Graham Harvey is the author of The Carbon Fields and We Want Real Food. He is also founder of grazingAmazing.com and pasturepromise.tv.

Low input farming - diversity is the key - comment - The Ecologist

And here are some pieces from the No Tech Magazine website: 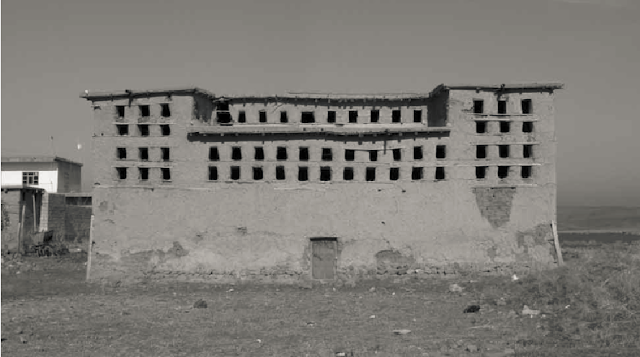 Many societies, ancient and contemporary, have innovated ways of supplying their fields with fixed nitrogen and phosphorus—two crucial ingredients for crop productivity. One is crop rotation, which alternates nitrogen-fixing and nitrogen-exhausting crops. Farmers around the world make use of chickens, ducks, and geese to add “fresh” guano to their fields. Cattle manure is another useful alternative—although it often lacks in phosphorus. Much more labor intensive than simply adding fossil-fuel derived synthetic fertilizer, these practices tend to build up soil, limit greenhouse gas emissions, and lead to less run-off into rivers, lakes, and oceans.

Persian pigeon towers are one of the more elegant solutions to the nitrogen-phosphorus problem. These are essentially castles built for thousands of wild pigeons, strategically placed in the middle of the fields. Their droppings were shoveled up once a year and sold to nearby farmers. While most pigeon towers existing today are in disrepair, the oldest still standing are dated to the 16th century (but they are assumed to have existed over 1,000 years ago) and helped fuel the cultivation of Persia’s legendary orchards, melons, and wheat production.[1] [Read more…] 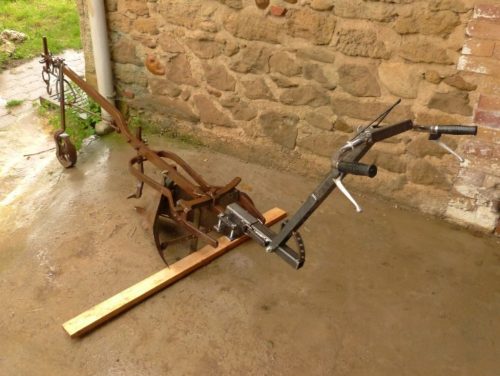 Based on the principle that farmers are themselves innovators, they have been collaboratively developing methods and practices to reclaim farming skills and achieve self-sufficiency in relation to the tools and machinery used in organic farming.

They have an English language website, which includes about a dozen tool descriptions with technical drawings. All tools can be appropriated and modified by farmers. [Read more…]

As a result of the industrial revolution and the subsequent development of “big agriculture,” small-scale farming tools have become almost obsolete. In order to fulfill the demand created by a burgeoning community of small-scale farmers, Stone Barns Center has partnered with Barry Griffin, a design engineer, to develop farming equipment and tools. Called the Slow Tools Project, this partnership brings together leading engineers and farmers to design and build appropriately scaled tools that are lightweight, affordable and open-source. [Read more…]


Turning the Soil with a Bicycle Handlebar

The agricultural tool shown in this video is pure genius. However, as some readers on our Facebook-page have noted, turning the soil disrupts soil organisms and brings more weeds. Another human-powered tool, the broadfork, loosens the soil without turning it. Thanks to Jean Armstrong Nick and Austin Liu. 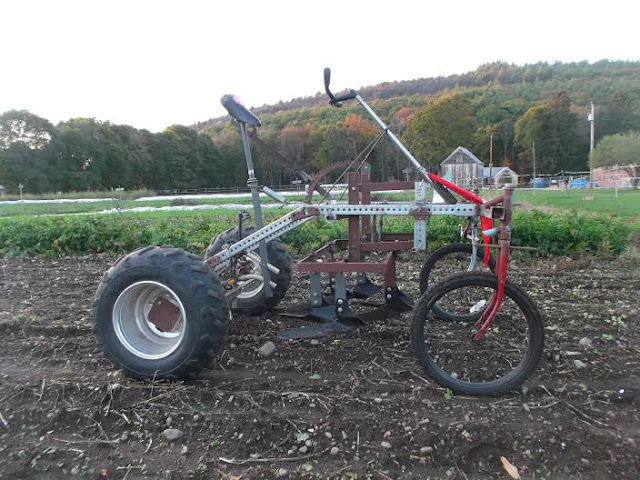 The Culticycle is a pedal powered tractor that can cultivate, seed, spray, or pull gear for most low horsepower tasks. We talked about the first prototype almost two years ago. A new version has now been released, built around a modular tractor frame. Tim Cooke explains us how it’s built and how it works: [Read more…]

The Beauty of Organic Farming

It’s not an advantage that’s often emphasized, but organic fields are much more beautiful than monocultures. The picture above was shot north of Santa Cruz, USA. Photographer is Lloyd Kahn, author of the fascinating Shelter blog.

NO TECH MAGAZINE We believe in progress and technology - Farming.
.
.
Posted by Jeremy Woodward at 11:02